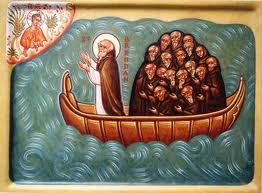 The traditional Old Irish voyage tales known as immrama mostly tell of voyages towards the west, the traditional (European) direction for the Otherworld, where the sun sets into the sea.  The immrama hark back to older pre-Christian Celtic voyage tales: but the briefest of readings will show that the stories of Bran or Maeldune are simple entertainment compared with the difficult and cryptic Welsh  poem, ‘The Spoils of Annwfn’.

It's hard to disentangle cause and effect, belief and tradition.  Why was it the practice of many an early Celtic monk to set sail for a remote island on which to live and meditate – like Saint Cuthbert on Inner Farne, who was observed by the community on Lindisfarne to pray all night standing in the sea?  Was it only for the solitude and sense of being cut off from the world, or was there a half-hidden memory or tradition that the voyage itself was a holy act which would bring the traveller at last to set bodily foot upon the shore of another world?  Alongside the fame of their monasteries, is there a second reason why Lindisfarne off the east coast of Britain, and Iona off the west, are both named ‘Holy Island’?

We’ll never know, any more than we’ll ever be able to answer the question I asked at the beginning of this series on Mystical Voyages, if prehistoric peoples who set out under sail or oar in the earliest times and colonised previously uninhabited lands all over the globe, may have done so partly out of a belief that they were voyaging to the land of spirits, gods, and their ancestors, the blessed dead.

‘... do you think,’ says Lucy in ‘The Voyage of the Dawn Treader’, ‘Aslan’s country would be that sort of country – I mean, the sort you could ever sail to?’

Well, who knew?  There was only one way to find out.

This Irish in particular, stationed as they are on the western verge of Northern Europe, were in a particularly good position to ask themselves the question, ‘What might be out there?’  One of the earliest parts of the British Isles to become Christian, Ireland was sending out missionaries to England and the continent by the 6th century AD: which is also the era of Saint Brendan.

Brendan, whose voyages are recorded in many manuscripts, sets off into the Atlantic Ocean in search of Paradise, the Land of the Blessed, after dreaming of  ‘a beautiful island with angels serving upon it’.  Later, hearing the account of  a fellow monk, Mernoke, who claimed to have sailed to the Earthly Paradise, Brendan puts out in a curragh – a hide boat – with twelve companions in search of this country.  He spends years wandering the Atlantic between island and island: the island of the ‘Comely Hound’ (a dog which leads them to a hall with a table spread with food); the Island of Sheep, ‘every sheep the size of an ox’; ‘The Paradise of Birds’, on which the angels who fell with Lucifer, but whose fault was small, live in the form of small birds all rejoicing and singing the matins and the verses of the psalms…

And I particularly like the amiable sea monster, ‘Jasconye the Fish’, whom the monks mistake for an island and who – after a startled first occasion when he swims off, bearing the fire the monks have lighted upon him still on his back – allows Brendan and his companions to celebrate Easter upon his back as an annual occurrence. Brendan seems to know all about this beast, explaining to his companions that Jasconye is for ever vainly trying to swallow his own tail.  Is this an echo of the Northern Midgard Serpent, or simply a bit of early medieval natural science?  Here he is anyway, on a map of 1621, obligingly stretched out between the east coast of Africa and 'the Fortunate Isles', with 'St Brendan's Isle' to the north. There’s a clear sea like Maeldune’s, full of fishes which come to hear Mass:

So clear that they could see to the bottom, and it was all covered with a great heap of fishes.  …And the fishes awoke and started up and came all around the ship in a heap, that they could hardly see the water for fishes.  But when the mass was ended each one of them turned himself and swam away, and they saw them no more.

It’s lovely, I think, that all nature is included in this Celtic Christianity.

Like Maeldune and his friends, Brendan and his companions also venture close to what seems suspiciously like an erupting volcano:

There came a south wind that drove them on… and at the end of eight days they saw far away in the north a dark country full of stench and of smoke; and as the ship drew near it they heard great blowing and blasting of bellows, and a noise of blows and a noise like thunder, the way they were all afeared and blessed themselves. …And with that there came demons thick about them on every side, with tongs and with fiery hammers, and followed after them till it seemed all the sea to be one fire… and they saw a hill all on fire and like as if walled in with fire, and clouds upon it…

This has to be Iceland, surely?  To Brendan of course, it’s the borders of hell, and therefore hardly surprising that their next encounter is with poor Judas Iscariot, marooned on a rock.

In the end, after forty days more sailing, and showers of hail, and fog, Brendan and his companions do reach the Land of Promise, the Blessed Land.  Oddly enough, although they should be sailing west, the land they see is to the east. (Perhaps this is because east is the direction of Jerusalem: the Earthly Paradise is always located to the east in later medieval maps.)  It is:

...clear and lightsome, and the trees full of fruit on every bough… and the air neither hot nor cold but always one way, and the delight that they found there could never be told.  Then they came to a river that they could not cross but they could see beyond it the country that had no bounds to its beauty.  Then there came to them a young man… and took [Brendan] by the hand and said to him…

‘Here is the country you have been in search of, but it is our Lord’s will you should go back again and make no delay… And this river you see here is the mering,’ he said, ‘that divides the worlds, for no man may come to the other side of it while he is in life; [and when he dies] it is then there will be leave to see this country towards the world’s end.’

Praising God and laden with fruit of the country, and precious, stones, Brendan returns to Ireland and dies, his whole mind set on the heaven he has already seen.

NB: I am also to be found, this morning, over at The History Girls, talking about girls dressed as boys in historical fiction.

Posted by Katherine Langrish at 01:25