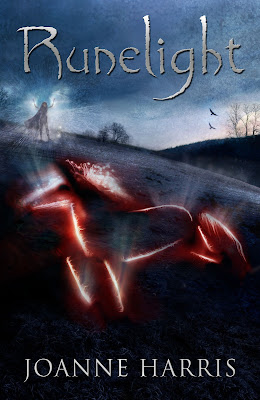 Well, here is the rather lovely cover of ‘Runelight’, the long-awaited sequel to Joanne Harris’s first Norse fantasy ‘Runemarks’. I’ve already written about that, but to remind you (and urge you to read the book if you haven’t already), here’s a link to the Fairytale Reflection Joanne wrote for this blog back in July, about her fascination with the story of the Pied Piper. As I said then,

"‘Runemarks’ is a wonderful concoction of Norse legend and fantasy. It grabbed me from the opening sentence: 'Seven o’clock on a Monday morning, five hundred years after the End of the World, and goblins had been at the cellar again.' And soon after that, the brave and independent heroine Maddy Smith, born with a runemark (or ruinmark) on her hand, is off exploring the labryrinthine caverns under Red Horse Hill with a goblin guide, hunting for the mysterious ‘Whisperer’ at the instigation of her old and ambiguous mentor, One-Eye. A magnificent adventure follows."

And here is the Red Horse of Red Horse Hill on the cover above: and now, in ‘Runelight’, Maddy has a counterpart. Maggie Rede is her twin sister, though neither of them knows it. The child of a harsh upbringing, she patrols the catacombs of the city of World’s End, full of religious zeal for the Good Book and the Order. But she’s also romantic and untaught, and perhaps it’s not surprising when she falls in love with exactly the wrong person – mean-eyed Adam, possessed by the spirit of the sinister ‘Whisperer’.

It’s hard not to love Maggie: she’s so brave and gallant – and so deluded. And she and Maddy are on exactly opposite sides... For there’s a prophecy: Three Riders with swords of flame will come to purge the Worlds. It all rises to a nail-biting climax as Maddy, with the reluctant help of Loki, battles to save her long-lost sister and rebuild Asgard, citadel of the gods, in time to save the Nine Worlds from being engulfed by Chaos.

I was looking forward immensely to reading ‘Runelight’ and I wasn’t disappointed. It’s a grand extravaganza of a book, and – at nearly 600 pages – one to really settle down with and take time over.  Because Joanne Harris is known mainly for her adult books, I've noticed a certain amount of what seems to me unnecessary head-scratching about this one. Is it for children? Is it YA? Is it for adults?  But books are 'for' anyone who can read and enjoy them. Changing mythologies for a moment, there’s a Greek story about a man called Procrustes, a bandit who forced his victims to fit an iron bed he had made, either by physically stretching them or by cutting off their arms and legs. Many a book is laid on the Procrustean beds of the kids/YA/adult categories. Some fit well, but there are others which are bigger. They spill over, and rather than complain about it, or squish them in or lop bits off, it’s better to remember that these categories are really arbitrary and no one can define them anyway. And so ‘Runelight’ is for any reader, young or old, who can cope with a complex, gradually unfolding story, drama, humour and pathos, a large cast of brilliant characters and a myriad witty allusions to Norse mythology.

Like the Norse myths themselves, as they've come down to us in the Prose Edda of Snorri Sturluson, 'Runelight' is often very funny and irreverent, and whether you know the myths or not there is plenty to appreciate. I loved Joanne’s take on the awesome Midgard Serpent Jörmungandr, who acts as Maddy’s steed ‘Jorgi’ in horse shape: somnolent and slimy and continually snacking on seafood. And how come I never thought of Odin’s eight-legged horse horse Sleipnir as a spider before? And then there’s Sif of the Golden Hair (note those capitals) – a self-important beauty with a strong resemblance to a pig. And Loki, of course, Dog Star and Trickster, always out for himself yet somehow always managing to do the right thing. And last but not least, Odin – who can never be trusted at all, even when he’s clearly dead...

I can’t think of a nicer thing to do on a cold autumn or winter evening than to curl up in a big chair, turn on the lamp, and open this book to the first page:

Five past midnight in World’s End, three years after the End of the World, and, as usual, there was nothing to be seen or heard in the catacombs of the Universal City – except of course for the rats and (if you believed in them) the ghosts of the dead...

Runelight is published by Doubleday

Posted by Katherine Langrish at 01:23