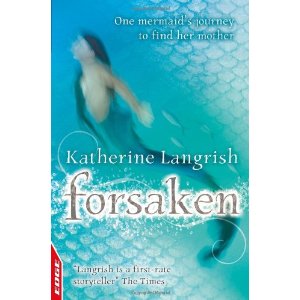 Mara's mother is missing, her little brother is sick, maybe dying, her father is grieving.  It all seems hopeless - until Mara sets out on a life-or-death journey to bring her mother home.

Please excuse a quick interruption to service (Mystical Voyages will be back tomorrow) so that I can do a little dance and tell you that my mermaid book 'Forsaken' is published today by Franklin Watts/EDGE, along with three other titles by Ali Sparkes, Andy Briggs and Joe Craig in a series called Rivets.

All four in the series are short stories individually published, intended for readers of nine plus who aren't confident about tackling thicker volumes.

'Forsaken' is - along with most of my other books - based on folklore, on a tale which is most famously the inspiration for Matthew Arnold's beautiful 19th century poem 'The Forsaken Merman' - the story of a merman who marries a human woman, Margaret.

COME, dear children, let us away;
Down and away below.
Now my brothers call from the bay;
Now the great winds shoreward blow;
Now the salt tides seaward flow;
Now the wild white horses play,
Champ and chafe and toss in the spray.
Children dear, let us away.
This way, this way!

The merman, who speaks the poem, has married a human woman, Margaret.  They lived happily together under the sea till one day she heard church bells ringing in the world above, and felt a sudden longing to go and pray.  The merman agreed to part with her for a short visit but once on land she never returned to the sea, leaving her husband and little mer-children desolate.

Come away, away, children.
Come children, come down.
The hoarse wind blows colder;
Lights shine in the town.
She will start from her slumber
When gusts shake the door;
She will hear the winds howling,
Will hear the waves roar.
We shall see, while above us
The waves roar and whirl,
A ceiling of amber,
A pavement of pearl.
Singing, 'Here came a mortal,
But faithless was she:
And alone dwell for ever
The kings of the sea.'

I read this poem many times as a child and always loved its lilting, changing rhythms and the beauty of its descriptions, as well as feeling sorry for the poor, heartbroken merman.  It's the opposite of the Selkie story which I use in 'West of the Moon': about the fisherman who takes a selkie bride, and the message of both tales seems to be about the attraction of the Other, as well as the difficulty of living with it.  Of course the old belief about merfolk - as for all faerie folk - was that unlike human beings, they had no souls.  Margaret fears she too will lose her immortal soul and her chance of heaven if she stays with the merman.  This fear leads her to abandon her husband and children.  And here is an eternal question, one still being asked and played out today in many a family: was she right to follow her beliefs?  Or wrong to cause her family so much unhappiness?

In the original Danish ballad, which I think Arnold must have read, 'Agnete and the Merman', the woman lives eight years with the Merman under the sea until one day she 'hears the clocks of England chime' and asks permisson to go to church.  She meets her mother at the church door. 'Where hast thou been?'  'I have been at the bottom of the sea, and have seven sons by the Merman'.  The Merman comes to find her, but when he peeps into the church, all the little stone images turn their backs on him.

When I read this, a shiver ran down my spine and I knew I had to tell the story again - but this time I wondered, what would have happened if, instead of the merman, one of Margaret's own daughters came to find her...?

'Forsaken' is available from today as a 'proper' book and as an e-book on Amazon.
Posted by Katherine Langrish at 01:09