Folklore Snippets - "To Catch a Nisse"

As every one was eager to have a nisse attached to his farm, the following plan was formerly made use of to catch one. The people went out into the wood to fell a tree. At the sound of its fall the nisses all came running as hard as they could to see how folk did with it, so they sat down beside them and talked with them about one thing and another. When the wedges were driven into the tree, it would often happen that a nisse’s little tail would fall into the cleft, and when the edge was driven out, the tail was fast and nisse was a prisoner. 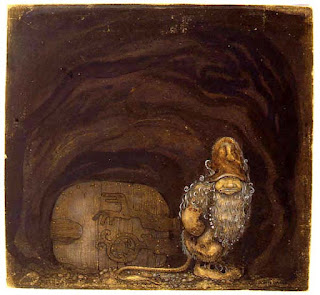 Down in Bögeskov (Beech Wood) lived two poor people who, as they lay awake one night, talked of how fine it would be if a nisse would come and help them. No sooner had they said this than they heard a noise in the loft, as if someone were grinding corn. “Hallo!” said the man,“there we have him already!” “Lord Jesus, man, what’s that you say?” said the woman; but as soon as she named the Lord’s name, they heard nisse go crash out of the loft, taking the gable along with him.