"The Brides of Rollrock Island" by Margo Lanagan 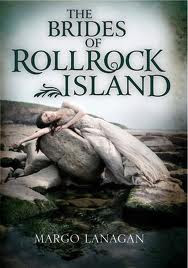 Of all the underwater peoples, the selkies – the seal people – have the closest connection with human beings.  You’ve only to go out in a small boat anywhere around the north coast of Britain, to see the grey seals poking their curious round heads out of the waves, to see them sprawling on the rocks, and to meet their dark, expressive eyes. They exist – unarguably, incontrovertibly – in a way which mermaids and sirens don’t.

And they come out on land, and they suckle their young in a very human fashion: no wonder, then, that legends of selkies sprang up – of how the grey seals could cast off their skins and come dancing on moonlit beaches in the form of beautiful young men and women.

But the stories about selkies never have happy endings. If mermaid stories are often concerned with the mermaid’s lack of an immortal soul, selkie tales are about capture and imprisonment, abandonment and loss.  They are about the changing balance of power within a relationship.  They are about depression and grief.

Margo Lanagan’s utterly wonderful book ‘The Brides of Rollrock Island’ explores all these themes.  It’s set in a tiny, almost incestuous fishing community, so isolated (I’m reminded that isolated literally means islanded) that the opinion of family and neighbours is the opinion of the world. And it’s a place which the humans share with a population of seals.

Misskaella Prout is unhappy.  Plump, ungainly and difficult, the youngest of several children, butt of many a family joke and sisterly unkindness, one day she wakes to find in herself a terrifying but transforming power over the seals. She can see sparks and seeds of humanity within them, and stir them into growth: she creates for herself a beautiful man who steps out of his bull seal carcass to make love to her.

Even this transient encounter has tragic and unforeseeable results; but gradually word of Misskaella’s powers gets about, and one by one the men of the village begin coming to her to ask her to provide them with seal brides.

Including the men who already have wives and children.

Margo Lanagan's writing is astoundingly good.  It's physical and shocking and brilliant, like reading poetry by Ted Hughes, except in prose. Everything is distinct, clearly imagined - especially the moment of transformation, the human birth, the moment when the sealskins split, unzip, and out of that blubbery fleshy darkness step the slender and beautiful seal girls.  But are they really human?  To the men, the seal brides are the perfect women: meek, beautiful, domestic – but even the men become gradually, uncomfortably aware of the deep, helpless sadness of their chosen mates.  A great wrong has been done to them.

As years pass, the story is taken up by a succession of voices. Bitter, complicated Misskaella, naïve, well-meaning Dominic Mallett, and finally young Daniel Mallett, whose own mother is a seal bride – each has a different view of the tragedy which is being enacted and perpetuated on Rollrock Island.

‘The Brides of Rollrock Island’ is about greed, and injustice, and the unforeseen consequences of getting what you think you want. It’s about the shamefaced, pathetic gestures by which the guilty attempt to palliate crimes which they have no intention of redressing.  It’s about seeing the world through a distorting lens and telling yourself you can see straight, it’s about self-deception – and, finally, salvation.

'The Brides of Rollrock Island' by Margo Lanagan is published in the UK in hardcover by David Fickling Books.

And on Wednesday, Margo Lanagan will be a guest here on the blog, with much more to say about selkies and the background to her marvellous book!

Posted by Katherine Langrish at 00:01