Margo Lanagan is my guest today to talk about selkies and the inspiration for her book 'The Brides of Rollrock Island'.


I can't remember where I first heard about selkies. I feel as if I've always known about them, though, so it must have been early, in some collection of fairytales or folklore borrowed from the Raymond Terrace Library in the sixties.

At any rate, when I picked up some strange seaweed-like knitting-wool in a discount store a few years ago, and wondered what it would be like to knit actual seaweed, and why a person would be even trying to do so, selkies presented themselves as the most likely reason behind it. I thought at first that the seaweed blankets were more like nets; the husbands threw them over their wives to keep them on land, when the women got desperate and tried to return to the sea; they were a means of entrapment. (So even in the first stages, I envisaged all my selkies as women.) But in the end I made them more like security blankets, under which the selkies lay and brooded and wept, consoled by the sea-smell.

Selkie stories are all very sad, and even the ones that end well have a poignancy; a selkie mother may come and dance every year with her children on Midsummer Eve, but what about the rest of the year's yearning? What about the lovelorn husband left behind?

Against this incurable sorrow, this irreconcilable difference and distance between the loved ones, is always set the spellbinding beauty of selkies, whether they be male or female. It's never worth what is sacrificed for a land-person to claim this beauty, but they are helpless to resist it. Part of the attraction of writing The Brides of Rollrock Island was to communicate that rather terrifying beauty, the alienness of it as well as its allure.

Part of it, too, was to counteract wafty Celtic Twilight interpretations of the selkie tales. I wanted blunt, practical people to fall, improbably, for the selkies; I wanted the selkie-coats to smell strongly and to be heavy and slippery and hard to manage and a problem to store and keep secret; I wanted the full unnaturalness of the process to be pointed up, and the full misery of the situation to be admitted. Selkies' passivity in the face of their imprisonment on land seems to me a dreadful thing that's often camouflaged by their beauty, and the attractively melancholy picture they present, wandering longingly beside the sea - and in this way, the men who love them are always, always let off the hook for the injury they've caused the selkie, and in turn their children. I think I wanted to make them more accountable, and to make them see what they'd done and feel remorse; I wanted to focus on their loss and their children's, rather than just be dazzled by the wonderment of a beauty's emerging from the sea, instead of the expected monster.

But probably the thing that excited me the most about writing a selkie tale was the necessity to enter into the experience of the change, the sensations (mental and physical) involved in the transformation from seal to person or person to seal, the sights and sounds and emotions involved in witnessing such a change. I've written several stories from animals' points of view, and I thought it would be an absorbing challenge to try to maintain the other-species foreignness of the seals even as they became almost-credible humans. I wanted to get up close to the actual skin-shedding, or to the first swimming-twitches as the selkie returned to seal form; I wanted it to be a clumsy, heavy process as well as a magical one.

Retelling folk and fairytales, you always start from the powerful bare bones of the story that have lasted through the ages; I wanted my story to grow a thick layer of seal fat and muscle and cover itself in tight, slick sealskin, to have it thrash around in an ungainly way on land, forever longing to take flight in the sea. No amount of magic should be allowed to diminish real seals in all their weight and agility, in their eerie likeness to us, yet their utter unknowability. 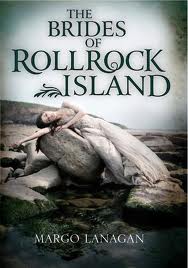 
Many thanks Margo!  You can follow Margo on Twitter, or read her own blog Among Amid Awhile

Posted by Katherine Langrish at 00:03