Folklore Snippets: The Ghost and His Wives

Here's a story from Ireland which insists on the traditional message of the Lyke Wake Dirge: whatever charity or good deeds you do in life will be rewarded you in equal and accurate measure after death.

I love the flat, unastonished tone of this story, which of course was originally told out loud by Michael Flaherty, and is much better read aloud than silently.  The confusion of hero and narrator at the end is a characteristic feature of oral storytelling; and so is the fairy dance after which the narrator awakes to find the vision has fled.  ("And I awoke and found me here/On the cold hill's side.")

There was a man coming from a funeral, and it chanced as he was coming along by the churchyard he fell in with the head of a man. “It is good and right,” said he to himself, “to take that with me and put it in a safe place.” He took up the head and laid it in the churchyard. He went on along the road home, and he met a man with the appearance of a gentleman.

“And how did you lose your head?” said the man.
“I did not lose it at all, but I left it in the place where you found it to see what you would do with it.”
“I believe you are a good person [ie: a fairy]” said the man; “and if so, it would be better for me to be in any other place than in your company.”
“Don’t be afraid, I won’t touch you. I would rather do you a good turn than a bad one.”
“I would like that,” said the man. “Come home with me till we get our dinner.”

…They were playing cards that evening, and the gentleman slept that night in the house, and on the morning of the morrow, “Come with me,” said the gentleman. 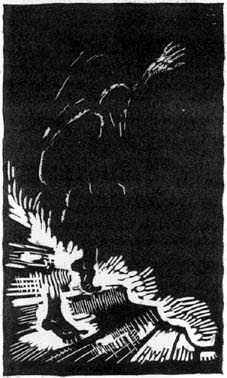 He went up the stairs and knocked at a door.
There came out a beautiful woman in a silk dress, and it ornamented with gold from the sole of her foot to the crown of her head. She asked him what he wanted. He asked her if she could get dinner for himself and the stranger. She said she could. She laid a dinner before him fit for a king. And when they had eaten and drunk it, the gentleman asked if he knew the reason why she was able to give them such a dinner.

"Come with me till you see my dwelling," said the gentleman.  There were outhouses and stables and woods around the house, and to speak the truth, he was in the prettiest place ever I saw with my eyes. "Come inside with me," said he to the man, and I was not long within, when there came a piper, and he told him to play, and he was not long playing when the house was filled with men and women. They began dancing. When part of the night was spent, I thought I would go and sleep; and when I awoke in the morning I could see nothing of the house or anything in the place.