Folklore Snippets: The Troll who built a Church 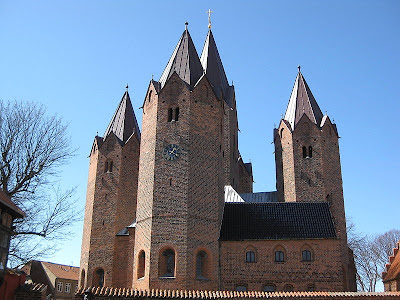 Esbern Snare, 1127 to 1204, was a daring Danish nobleman and commander who, around 1170, fortified the town of Kalundborg, Zealand, with a castle and towers, and also set about building a rather wonderful five-towered church which still exists. Here it is!

But the story goes that Esbern had supernatural help.  Here is the account, from Thomas Keightley’s Fairy Mythology:

When Esbern Snare was about building a church in Kalundborg, he saw clearly that his means were not adequate to the task.  But a Troll came to him and offered his services; and Esbern Snare made an agreement with him on these conditions, that he should be able to tell the Troll’s name when the church was finished; or in case he could not, that he should give him his heart and his eyes.

The work now went on rapidly, and the Troll set the church on stone pillars; but when all was nearly done, and there was only half a pillar wanting in the church, Esbern began to get frightened, for the name of the Troll was yet unknown to him.

One day he was going about the fields all alone, and in great anxiety on account of the perilous state he was in; when, tired and depressed, by reason of his exceeding grief and affliction, he laid him down on Ulshöi bank to rest himself a while.  While he was lying there, he heard a Troll-woman within the hill saying these words:

(However, as Keightley adds in a footnote that ‘Mr Thiele saw four pillars in the church’ - the four granite columns supporting the central tower - and that ‘the same story is told of the cathedral of Lund in Funen’, and anyway the tale is clearly a variant of Rumplestiltskin and Tom Tit Tot – then perhaps this story isn’t true after all…)

Posted by Katherine Langrish at 00:41