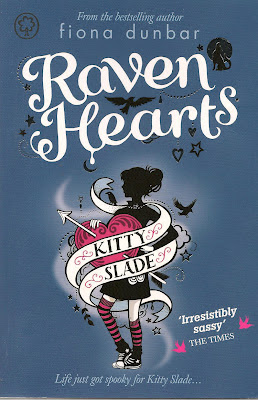 My friend Fiona Dunbar's lively and exciting children's adventure stories leap boundaries and span genres: for example her brilliant ‘Silk Sisters’ trilogy, which mixes genome research and nano-technology with, believe it or not, fashion, and wittily poses the question: what if you really are what you wear?

Now here comes Raven Hearts, the fourth in her series about the irrepressible Kitty Slade, whose ability to see ghosts (a talent called phantorama, inherited from her dead Greek mother) leads her into all sorts of adventures.  Kitty is a determined and attractive heroine, who takes her uncomfortable gift firmly in her stride. The first in the series, Divine Freaks, featured a dodgy London landlord, a scalpel-wielding ghost in the school biology lab, a back-street taxidermist, shrunken heads, and a fraudulent antiques business. In the sequel, Fire and Roses Kitty deals with a poltergeist, and encounters the ghost of a member of the Hellfire Club (you can find Fiona's post about her research for this book here); while the third book,Venus Rocks, is set in Cornwall and includes a ghost ship and evil Cornish sprites called spriggans. From which you'll gather that a strong sense of place is one of the keynotes of these books.

So I was more than excited to read Raven Hearts, especially as it's set in Yorkshire on Ilkley Moor, where I spent much of my own childhood scrambling about wishing I could have adventures like Enid Blyton's Famous Five, although if I'd found as much excitement as Kitty does, I would undoubtedly have chickened out and decided reading about adventures was better than experiencing them, after all.


Arriving in her family's camper van 'The Hippo' at a campsite near Ilkley Moor, Kitty rapidly becomes aware that all is not well. People have gone missing on the moor, which is rumoured to be haunted by a spectral black dog called the Barghest. (A nice Yorkshire folklore touch, that: Brontë devotees may remember Jane Eyre imagining the Barghest just before she meets Mr Rochester for the first time...) At the famous Cow and Calf Rocks Kitty meets a ghostly woman searching for her lost son. She hears childrens' voices chanting an eerie song (and yes, it's 'Ilkla Moor Baht'At', which when you think about is a pretty gruesome little ditty: 'the worms'll coom an' ate thee oop', etc.)  She's haunted by ravens.  And when she meets a highly unreliable spirit called Lupa, Kitty really does find herself in deadly danger...

I learned something while reading this book.  I grew up knowing about the prehistoric Swastika Stone, the Roman baths at White Wells, and the massive Cow and Calf Rocks.  But how come I'd never heard of the stone circle called the Twelve Apostles? Fiona Dunbar uses these settings deftly to create a sense of mystery; the story moves at a cracking pace, and by the time Kitty is cycling alone over the moor as dark falls and the moon rises, the stage is perfectly set for the appearance of something awful...

The Kitty Slade books are expertly pitched for the 9 + reader who wants something scary and exciting, but not TOO scary. One of the things I like most about them is that her heroine has back-up. Kitty can rely on her brother and sister for help, while her Greek grandmother Maro is a reassuring if eccentric presence.  This helps steady the reader’s nerves through some of the more hair-raising passages. If you have a nine-to-thirteen year old in your life with a taste for mystery, ghosts, adventure and a (light) touch of horror, believe me, they're going to really, really enjoy this series.

Posted by Katherine Langrish at 00:13