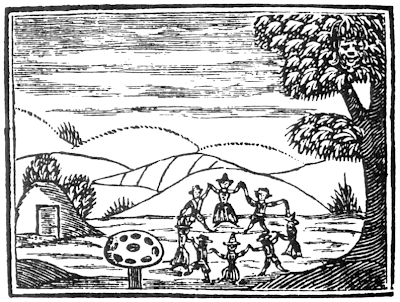 This is taken from an account of a childhood event experienced near Lanelwyd House, Bodfari, Denbigh, by one Dr Egbert or Edward Williams and written, according to Elias Owen, in 1757.  I think it's remarkable both for the immediacy of the account (he writes as if it had happened yesterday) and for the terror felt by all the children as soon as they witness the mysterious dancers. Notable also is the fact that the elf or dwarf cannot pass the boundary of the stile.

On a fine summer day (about midsummer) between the hours of 12 at noon and one, my eldest sister and myself, our next neighbours' children Barbara and Ann Evans, both older than myself, were in a field called Cae Caled near their house, all innocently engaged at play by a hedge under a tree, and not far from the stile next to that hedge, when one of us observed on the middle of the field a company of – what shall I call them? – Beings, neither men, women, nor children, dancing with great briskness. They were in full view less than a hundred yards from us, consisting of about seven or eight couples; we could not well reckon them [count them], owing to the briskness of their motions and the consternation with which we were struck at a sight so unusual.  They were all clothed in red, a dress not unlike a military uniform, without hats, but their heads tied with handkerchiefs of a reddish colour, sprigged or spotted with yellow, all uniform in this as in habit, all tied behind with the corners hanging down their backs, and white handkerchiefs in  their hands held loose by the corners.  They appeared of a size somewhat less than our own, but more like dwarfs than children.

On the first discovery we began, with no small dread, to question one another as to what they could be, as there were no soldiers in the country, not was it the time for May dancers, and as they differed much from all the human beings we had ever seen.  Thus alarmed we dropped our play, left our station, and made for the stile.  Still keeping our eyes upon them we observed one of their company starting from the rest and making towards us at a running pace. I being the youngest was the last at the stile,  and, though struck with an inexpressible panic, saw the grim elf just at my heels, having a full and clear, though terrific view of him, with his ancient, swarthy and grim complexion. I screamed out exceedingly; my sister also and our companions set up a roar, and the former dragged me with violence over the stile on which, from the moment I was disengaged from it, this warlike Lilliputian leaned and stretched himself after me, but came not over.

With palpitating hearts and loud cries we ran towards the house, alarmed the family and told them our trouble. The men instantly left their dinner, with whom still trembling we went to the place, and made the most solicitous and diligent enquiry in all the neighbourhood, both at that time and after, but never found the least vestige of any circumstance that could contribute to a solution of this remarkable phenomenon…


Posted by Katherine Langrish at 01:02