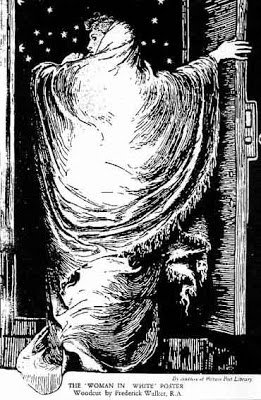 In my book ‘Dark Angels’ (US title ‘The Shadow Hunt’) the castle of La Motte Rouge, which shelters below the hill called Devil’s Edge, is haunted by a mournful White Lady who wanders the courtyard on dark and misty nights, wringing her hands and moaning softly.  She’s creepy but harmless, she's  forgotten her own name; she may be the diminished pagan spirit of the spring which feeds the castle’s cistern, and is regarded by the various inhabitants with attitudes ranging from fear to  pity. In this passage the saintly old priest Howell intercepts her as she peers in at the door of the castle’s chapel:

Billows of mist floated across the yard, and the pale lady was still moaning and wringing her hands at the chapel door.

“Hush now, hush!” the old man called in a soothing voice.  The lady turned to him like a frightened child.

“Dear, dear. …But that’s all right, because you see, we have a name for you.  Dame Blanche, our White Lady, our sweet Ladi Wen.”  He dropped into musical Welsh, and the lady listened very attentively.  When he had finished she bowed her head and walked smoothly away. The mist followed her.  Her feet moved a fraction above the ground, and when she reached the dark corner of the building, Wolf wasn’t sure if she went around it, or just vanished.

You can catch a glimpse of her here.


White Ladies are a bit different from other ghosts. In an article called The White Lady of Britain and Ireland, by Jane C Beck (Folklore, Vol 81, 1970), Beck argues that “the modern day ghost known as the White Lady … is …a creature with a heritage reaching back to the darkest recesses of time.  Although her most usual form today is that of a gliding spectre, some of the acts she performs recall her earlier condition as a deity.”

Ghost stories often come complete with ‘explanations’ for the apparition - explanations which usually feel contrived.  Frequently they involve some sort of crime: the ghost is unable to rest because it is either the victim or the perpetrator.  White ladies are often described as murdered brides or sweethearts, or else girls who have drowned themselves for love. They are frequently associated with water. A story from Yorkshire, reported in 1823, tells how a lovely maiden robed in white is to be seen on Hallowe’en at the spot where the rivers Hodge and Dove meet, standing with her golden hair streaming and her arm around the neck of a white doe. From Somerset, Ruth Tongue describes an apparition called the White Lady of Wellow,

… who haunts St Julian’s Well, now in a cottage garden.  She played the part of a banshee to the Lords of Hungerford, but she seems to have been a well spirit rather than a ghost.  The Lake Lady of Orchardleigh is another white lady who is rather a fairy than a ghost.  But the most fairy-like of the three is the White Rider of Corfe, who…gallops along the road on a white horse, turns clean aside by a field gate and into the middle of a meadow, where she vanishes.  I was told about her by some old-age pensioners in the Blackdown Hills in 1946.  One of them said. “She shone like a dewdrop,” and another of them, “T’was like liddle bells all a-chime.”

In Wales there are apparently two types of white ladies, the Dynes Mewn Gwyn or lady in white, and the ladi wen: the first is a true ghost; the second is an apparition which haunts the place where someone has died a violent death. Not all White Ladies are harmless.  Jane Beck tells of one which appeared at Ogmore Castle near Bridgend, Glamorgan, where she was believed to guard a treasure under the tower floor.  One man was brave enough to speak to her; she gave permission to take half the treasure and showed him where it lay, but when he was so greedy as to return for the rest:

The White Lady then set upon him, and to his dismay, he found she had claws instead of fingers, and with these she nearly tore him to pieces.

Jacob Grimm, in his Teutonic Mythology, talks of the White Lady as someone who

… appears in many houses when a member of the family is about to die, and …is thought to be the ancestress of the race.  She is sometimes seen at night tending and nursing the children… She wears a white robe, or is clad half in white, half in black; her feet are concealed buy yellow or green shoes.  In her hand she usually carries a bunch of keys or a golden spinning wheel.

I’m strongly reminded of Princess Irene’s great-great (ever-so-many-greats) grandmother in George MacDonald’s ‘The Princess and the Goblin’, a beautiful woman with long white hair who can seem both old and young, who inhabits the top floor of the castle tower, and sits spinning her magical moony wheel.  When Irene climbs the tower steps and taps at the door:

The princess opened the door and entered.  There was the moonlight streaming in at the window, and in the middle of the moonlight sat the old lady in her black dress with the white lace, and her silvery hair mingling with the moonlight, so that you could not have told which was which.

And is the Lady of the Lake, in the Morte D’Arthur, a White Lady?  She is seen by Arthur and Merlin ‘going upon the lake,’ and although it is not actually her arm ‘clothed in white samite’, which brandishes the sword Excalibur above the water, she does tell Arthur that the sword belongs to her. Whose is the arm, then?  We never find out.

In John Masefield’s wonderful wintry book “The Box of Delights’, there’s a passage which well combines the ambiguous mystery and dread of the White Lady.  Kay Harker is out on the Roman Road on a night ‘as black as a pocket’ and sees something white moving towards him:

“Come Kay,” she said, “you must not stay here; the Wolves are running: listen.”

Significantly the White Lady (who in this case is wholly benevolent) is still believed by Cook to haunt a water course: Duke’s Brook.  Masefield’s fiction is full of folklore, in which he clearly took great delight: his White Lady runs true to type. 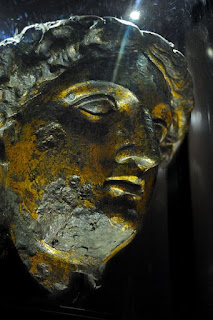 Before the Romans came to Britain, the British appear to have worshipped the deities – many or mainly female – of rivers, streams, springs and pools. Most of their names, like that of my White Lady, must have been forgotten, but we still know Sabrina of the River Severn, and Sulis, who gave her name to Aquae Sulis, the hot springs at Bath. To the waters of these springs, pools and rivers, the British made offerings – just as we still throw coins into fountains – and many is the bronze or iron age sword which has been recovered from river beds and marshlands.  How many Bediveres have thrown precious weapons to the Lady of the Lake?  And what did they hope to receive in return? Health?  Wealth? Victory?

I like White Ladies – beautiful, eerie creatures draped in moonlight, trailing clouds of grief and longing for those far-away ages when they still had the power to bless and to curse.

The Woman in White by Frederick Walker, image courtesy of The Victorian Web
Irene's Grandmother, by Arthur Hughes; illustration from The Princess and the Goblin by George Macdonald
Sulis Minerva in the Museum of Bath by Akalvin at Wikimedia Commons. Original uploader was Akalvin at de.wikipedia
Posted by Katherine Langrish at 01:02

Email ThisBlogThis!Share to TwitterShare to FacebookShare to Pinterest
Labels: Dark Angels, ghosts, Jane C Beck, Katherine Langrish, The Box of Delights, The Lady of the Lake, The Princess and the Goblin, The Shadow Hunt, White Ladies