This is an unashamed blast of the trumpet for a writer who isn't half as well known as he deserves to be. If you love children's fantasy adventure, I hope some of you will try these books.  If you don't like them I'll eat my hat. 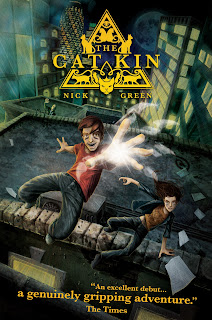 Nick Green's ‘The Cat Kin’ with its sequels ‘Cats Paw’ and 'Cat's Cradle' is a brilliant contemporary fantasy for young readers. What if a child could have a cat’s powers?  What if you could jump ten times your own height, see in the dark, tread silently, be almost invisible?  What if you had a very unusual teacher who could show you how to do all this, via a forgotten Ancient Egyptian martial art called 'pashki'?  What wonderful advantages your new powers would give you, if you had to combat a bunch of evil crooks experimenting on animals in a nearby factory!  What fun!

A few years ago when I  first heard of Nick Green's debut novel ‘The Cat Kin’, it was news.  Nick had self-published the book believing in its worth: and he was absolutely right.  After it was reviewed in The Times by Amanda Craig, who called it ‘a gripping adventure’, it was bought by Faber & Faber.  Nick was writing the sequel, there was going to be a trilogy, and everyone was talking about it.  What a great success story!  So I whizzed out and bought a copy.  I was entranced.

Two London kids, Ben and Tiffany, each living tough lives, join an after-school gym class run by a strange woman called Mrs Powell.  And it turns out that what she teaches is the lost Egyptian art of ‘pashki’ – moving and sensing like a cat.  Soon Ben, Tiffany and the rest of their class are leaping over London’s rooftops, slipping near-invisibly through the streets – and about to need all nine of their new lives as they discover the very dark deeds taking place in the old factory with the chimney like a wizard’s tower, visible from Ben’s apartment block.  The plot is exciting, the writing is fresh, funny and perceptive. 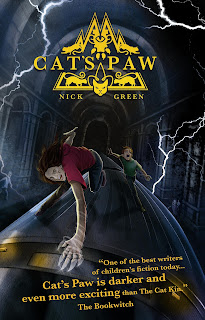 But there’s a dark side to the books, too.  Tiffany is struggling with the reality of her brother’s illness.  There's a moral dilemma: what if illegal experiments could produce a drug to cure him?  Ben and his mother are under threat, their apartment wrecked by thuggish developers who want them to move out.  And both children have to learn responsibility for their new, sometimes frightening powers.


Well, there turned out to be a dark side to the success story of Nick’s publication, too.  Despite so many good reviews, despite the fact that by this time Nick had written the sequel, Faber & Faber decided not, after all, to go ahead with publishing this second volume, ‘Cat’s Paw’.

This sort of crushing blow is something that only another author can fully understand.  Bloodied but unbowed, Nick decided to self-publish ‘Cat’s Paw’, and be damned to 'em.

Which he did.  And in the best fairytale tradition, courage and tenacity, allied to faith and talent, paid off.  ‘The Cat Kin’ and 'Cat's Paw' were taken by ‘Strident Publishing’ and republished with a brand-new covers.  The third book in the trilogy, ‘Cat’s Cradle' was published recently in 2012.  I read it last week in one single gulp, and loved every minute! Tiffany and Ben combat their worst enemies yet: a criminal clan whose sinister art installation in Tate Modern looks like bringing London literally to its knees. The intrepid hero and heroine are evenly matched, and as they cheat death by crocodile and leap all over the roof of St Paul's Cathedral, their friendship turns delicately into something warmer.  What's not to like? 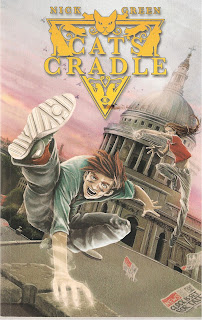 Nick Green writes with flair, wit, and an enviable way with words. (I love the moment when Ben creeps up behind a criminal to put a pashki move on him: "The man slid to the floor, taken out as quietly as a library book.")  He also has a tremendous sense of place. This is London. The books are brilliantly exciting. As far as the ticklish business of age range is concerned, I'd suggest the older end of the children's market, and younger teens (say a rough guide of 9 to 14?)  because of some violence and the occasional death of sympathetic minor characters, which younger children might find upsetting. (You have to wait for the end of the trilogy to find out that the account of one death, at least, has been exaggerated.)  But overall these are positive books with happy endings. They ought to be selling in shedloads.

If you have a Kindle, you have a chance to try out Nick's latest book for yourselves. ( I haven't read it myself because I haven't yet succumbed to a Kindle, though this is the sort of thing that makes me weaken.)  It's called 'The Storm Bottle' and you can download it FREE on February 14th and 15th by clicking on THIS LINK. And here's the description:

"Foam unzipped the waves. I saw a crescent fin, a glass-boulder forehead. The dolphin had come back."
Swimming with dolphins is said to be the number one thing to do before you die. For 12-year-old Michael, it very nearly is. A secret boat trip has gone tragically wrong, and now he lies unconscious in hospital.

But when Michael finally wakes up, he seems different. His step sister Bibi is soon convinced that he is not who he appears to be. Meanwhile, in the ocean beyond Bermuda’s reefs, a group of bottlenose dolphins are astonished to discover a stranger in their midst – a boy lost and desperate to return home.

Bermuda is a place of mysteries. Some believe its seas are enchanted, and the sun-drenched islands conceal a darker past, haunted with tales of lost ships. Now Bibi and Michael are finding themselves in the most extraordinary tale of all.

Damn it, I'm really going to have to get that Kindle. 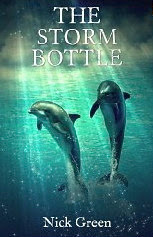 Posted by Katherine Langrish at 14:46