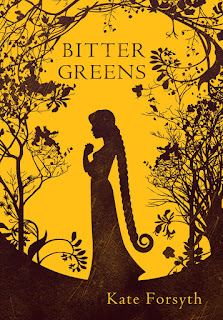 Kate Forsyth first appeared on this blog a couple of years ago when I reviewed her enchanting children's fantasy 'The Puzzle Ring'. Now her recent adult fantasy 'Bitter Greens' is about to be published in the UK.   It's a fabulous mix of history, fantasy and fiction: suitably, as its heroine is a storyteller par excellence,  the French writer Mademoiselle Charlotte-Rose de Caumont de la Force (1654-1724), best known as the author of the fairytale ‘Persinette’ (1698), which later was adapted by the Brothers Grimm as the famous ‘Rapunzel’. Born to Protestant parents, Mademoiselle de la Force found it too dangerous to retain that faith at the intolerant court of the Sun King, Louis XIV, who denied Protestants religious and political freedom and pursued policies of persection and forcible conversion.

She converted, therefore, but in 1697 her lively wit and romans à clef, along with a number of scandals and rumours, provoked the King to send her to the Benedictine abbey of Gercy-en-Brie, where she wrote her memoirs and a number of other novels.

Told in the first person, 'Bitter Greens' begins with Charlotte’s disgrace and journey to the abbey, where the nuns strip her of her elaborate court dress – so complicated in its fastenings she literally cannot undress herself – replacing it with a simple linen smock and shearing off her hair. Charlotte’s quick tongue and spirit get her into more trouble and she undergoes penances such as lying prostrate for hours on the cold stone floor of the chapel.  In this misery, she finds a friend – an older nun, Soeur Seraphina, who takes her to work in the garden and begins telling her a story: the story of a young Venetian girl who was sold to a sorceress for a handful of bitter green herbs and shut up in a high tower…

From this point on, the story of 'Bitter Greens' interweaves history, fiction and fantasy, complex as any braid of Rapunzel’s hair. There is Charlotte’s own personal history at the court of the Sun King. There is the tale of a Venetian courtesan and witch called Selena Leonelli, or La Strega Bella, who becomes the mistress of Titian and who prolongs her youth by drinking the blood of young virgins. And there is the tale of Marguerite, the child whom La Strega imprisons in the high tower. 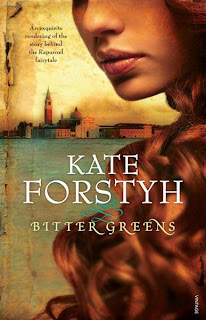 Rich and magical as it is, this is frequently a very dark story (and the UK cover, though pretty, says fairytale in a way which suggests a much younger book: this is not in any way a novel for children, and the Australian cover, above, may be a better guide.) Kate Forsyth reminds us of the extreme powerlessness of most women – even those apparently most powerful and celebrated, the Queen herself, or the King’s mistresses, whose wealth and status depend entirely upon his favour. Charlotte-Rose’s mother is deprived of her chateau, freedom and family at the whim of the king. Servant women are raped against walls and left to get on with their work. Charlotte-Rose's talent and intelligence is no security: like any other lady she she must flirt and tease and scheme for a suitable marriage. And the streets – whether of 17th century Paris or 16th century Venice – are full of girls whose only livelihood is to sell themselves. It’s a world of casual brutality, revenge, desperation, plague and persecution. No wonder if there are dead babies and abandoned children. No wonder if some of the survivors turn to witchcraft.

Bitter Greens is a powerful tale about survival, and the endurance of hope, and the tales we tell ourselves to help us carry on. It’s fascinating that Charlotte-Rose wrote ‘Persinette’ while she herself was shut up in a convent: and in Kate Forsyth’s hands the tale of the child taken from her parents and shut up in a high tower has truly disturbing resonances, a reminder of some dreadful modern examples. Fairytales are not always pretty. Nevertheless, there is hope. Rapunzel escapes from her tower, and Charlotte-Rose did eventually return to Paris – where, Kate Forsyth tells us in the Afterword, she became a celebrated member of the salons and joined a secret society set up by the Duchesse de Maine called ‘The Order of the Honey Bee’ – whose thirty-nine members ‘wore a dark-red satin dress embroidered with silver bees and a wig shaped like a beehive.’ Now that is survival with style.