The Wild Hunt Rides Over Paris

Around about a year ago I spent a few days in Paris with my daughter: we stayed in Montmartre, which I didn't know very well in spite of having once lived in France for four years, close to Fontainebleau.

I unreservedly recommend Montmartre as a place to visit.  Sure, there are rather a lot of sex shops at the foot of the hill and along the road of the Moulin Rouge; but up on the hill it still feels very much like the village it once was: home of artists and revolutionaries (most of whom wouldn't actually have minded the sex shops anyway.)  High above Paris, the hill used to be covered with windmills and gypsum mines; it was occupied by the Russians when they invaded Paris in 1814: they used the hill as a base for the artillery bombardment of the city, and legend proclaims they here invented the first bistro - fast food - from the Russian word bystro, "quickly".

Be that as it may, history-soaked Montmartre was once the haunt of artists like Pisarro, Matisse, Van Gogh, Renoir, Degas, Utrillo, Valadon and Toulouse-Lautrec - and the home of cabarets like La Palette d'Or and Le Chat Noir, for which Théophile Steinlen designed the iconic poster. 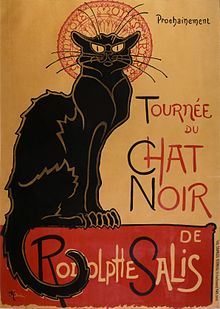 After walking up and down the steep little cobbled streets (there are still two old windmills to be seen) we ended up at the Musee de Montmartre, housed in what was once a 17th century abbey.  Renoir lived there for a time, and painted the garden. As you'd expect, the museum has a lot of brilliant art and plenty of information about the history of Montmartre - but the thing I really couldn't take my eyes off was the painting that heads this post.  Once I'd seen it, that was it.  I could have stood and looked at it for hours.

It's by Adolphe Willette, called Parce Domine - the opening words of a Catholic antiphon:  Parce, Domine, parce populo tuo: ne in aeternum irascaris nobis (Spare, Lord, spare your people: be not angry with us forever).  It's a massive canvas, taking up most of one wall: it's a nightscape over Paris: the smoky city stretches out at the very bottom of the frame, with the hill of Montmartre rising to the right.  And streaming out across the sky, over the rooftops, as if they have just leapt out from the windmills of Montmartre, is a fantastic and macabre harlequinade of the beautiful and the damned. 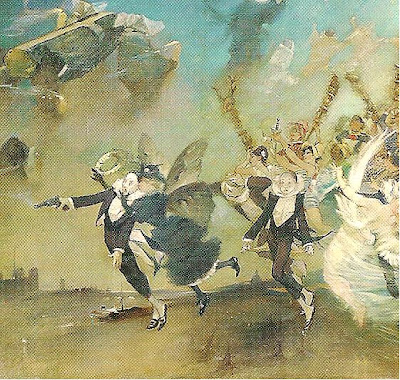 It's led by a Pierrot-like character, a suicide with the gun still in his hand, embraced and semi-supported by a woman in black with black butterfly wings.  She seems to be holding up his jaw.  Her feet run trippingly on nothing: his are elegantly crossed: it is clear he would fall without her: yet he is the foremost of this troupe. Behind comes another Pierrot-type character, dapper in white shirtfront, white spats and buckled shoes, dancing, dancing; and behind him... 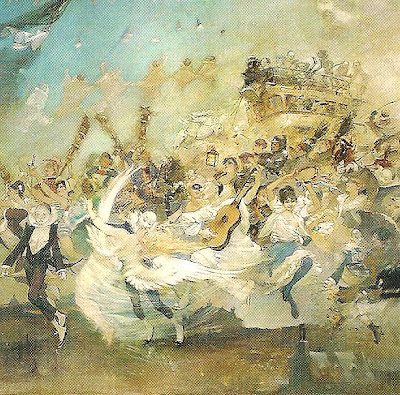 ... behind him sweeps a whole frenzied crowd of men and women, swirling and leaping and brandishing guitars and tambourines, rapiers and antler-crowned standards, brooms and whips; in the background a horse-drawn omnibus sways and hurtles along like a chariot. 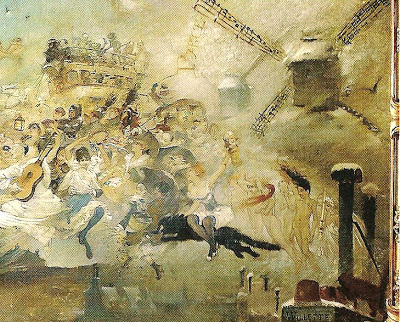 Their feet never touching the chimneys below, they stream out across the smoke-stained sky from the dark windmills (whose very vanes are staves of music) - a black cat (a Chat Noir) the size of a panther leaping across the canvas with a dancing girl sitting sideways on his back waving aloft what appears to be a swaddled baby (a dead child?), followed by a troop of naked and very young-looking girls - while a mortal cat, dark and solid on the snow-capped rooftop in the lower right hand corner, arches his back and spits at the ghostly throng.  Above it all... 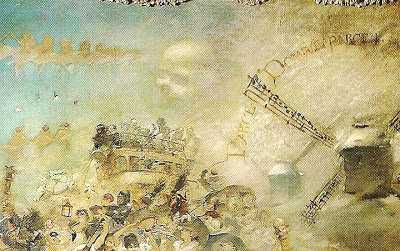 ... eyeless Death himself looms in the shape of a ghostly cloud and we read the words of the desperate music ringing from the vanes of the moulins: Parce, Domine, parce populo tuo.  Spare, Lord, spare your people.

If there's a better expression anywhere of the energy, gaiety, cruelty and poverty of late 19th century Paris, I don't know it. This is an amazing, amazing painting.  Think of it, the next time you hear the can-can.