Fairytale princesses: tougher than you think

Fairytale princesses are still frequently written off as insipid, passive, and generally terrible role models for girls and young women. And while it’s easy enough to find counter examples of bold and brave fairytale heroines (The Master Maid, Mollie Whuppie, the girl in The Black Bull of Norroway) these do tend to be less well known, or at least nothing like as well known as the classics, the famous tales, the ones Disney picked: The Sleeping Beauty, Snow White and the Seven Dwarfs, Cinderella, Beauty and the Beast.

In fact I don't happen to believe that it's the business either of literature in general, or of fairytales in particular, to provide role models.  (The business of literature is to tell stories about people, who may or may not be admirable.)  But even if it were, is the ‘insipid’ image really deserved? While it’s true that the Sleeping Beauty hasn’t much to do except await ‘true love’s kiss’, I don’t believe this is what makes the story so memorable – as I’ve said here – and I was pleased to discover Ursula K LeGuin saying much the same thing in a fine essay, ‘Wilderness Within’, in her collection ‘Cheek By Jowl’:  she quotes a short, haunting poem by Sylvia Townsend Warner:

The Sleeping Beauty woke:
The spit began to turn,
The woodmen cleared the brake,
The gardener mowed the lawn.
Woe’s me!  And must one kiss
Revoke the silent house, the birdsong wilderness?

For LeGuin, as for me: “the story is about that still centre: ‘the silent house, the birdsong wilderness’.”

As for the heroines of the other tales, they are all pretty active.  Abandoned in the forest, Snow White doesn’t lie down and die like the ‘Babes in the Wood’ but keeps going till she finds the house of the seven dwarfs, where she pays her way by working: 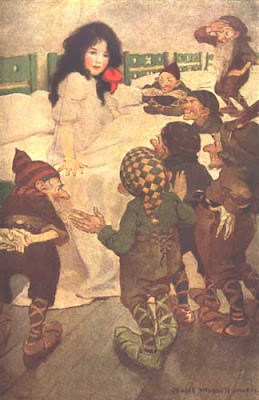 The dwarfs said, “Will you attend to our housekeeping for us?  Cook, make beds, wash, sew and knit?  If you like to do all this for us, and keep everything in order for us, you may stay and shall want for nothing.”
“With all my heart,” said the child.  So she stayed, keeping everything in excellent order. The dwarfs went every day to the mountains, to find copper and gold, and came home in the evening, and then their supper had to be ready.

I can’t see anything wrong or unworthy about this bargain.  Both sides get something out of it, both are satisfied.

Cinderella is another hard worker: grieving too, for her mother’s death: in the Grimm's version, 'Aschenputtel', the version I read as a child, there is no fairy godmother, no rats turned into coachmen, no pumpkin.  Cinderella makes her own magic. In a motif similar to that of ‘Beauty and the Beast’, she asks her father to bring her not beautiful clothes, pearls and jewels – as her stepsisters do – but ‘the first branch which knocks against your hat on the way home’. This turns out to be a hazel twig which Cinderella plants on her mother’s grave and waters with her tears, and:

A little white bird always came on the tree, and if Cinderella expressed a wish, the bird threw down to her what she had wished for.

When her stepmother throws peas and lentils into the ashes for her to pick out, Cinderella calls the birds:

“You tame pigeons, you turtle doves and all you birds beneath the sky, come and help me to pick
The good into the pot
The bad into the crop.”

And when the stepmother and sisters have sped away to the prince’s wedding, she goes to her mother’s grave and calls,
“Shiver and quiver, little tree,
Silver and gold throw down on me.”
Then the bird threw a gold and silver dress down to her, and slippers embroidered with silk and silver.

And so on, for the next three nights. It’s clear that Cinderella stage-manages the whole affair:

When evening came she wished to leave, and the King’s son followed her and wanted to see into which house she went.  But she sprang away from him and into the garden behind the house.  There stood a beautiful pear tree… She clambered so nimbly between the branches that the King’s son did not know where she had gone. He waited until her father came and said to him, “The unknown maiden has escaped from me and I believe she has climbed up the pear-tree. The father thought, “Can it be Cinderella?” and had an axe brought, and cut the tree down, but no one was in it.  And when they got into the kitchen, Cinderella lay there among the ashes, for she had jumped down on the other side of the tree, had taken the beautiful dress to the bird on the hazel tree, and put on her old grey gown.

This is a girl with her own mind and her own agenda.  She is a tough cookie, a girl who makes things happen. Although the tale of ‘Cinderella’ is often regarded as the archetypical ‘rags to riches’ story, it’s not, really.  A girl who can get whatever she wishes from a magical hazel tree is not ‘poor’.  In the course of the story, she gets her own back on nearly everyone.  Her father loses his pigeon house and pear tree (chopped to pieces); the stepsisters lose toes, heels and eventually their eyes, and the prince has to (a) delay his gratification and (b) put a good deal of effort into trying to find the mysterious girl he has lost his heart to.

Beauty, in ‘Beauty and the Beast’ is a similarly strong-minded young woman. The original tale by 18th century Madame de Villeneuve probably protested forced marriages - as Terri Windling puts it in another excellent essay:  "...Animal Bridegroom stories, in particular, embodied the real–life fears of women who could be promised to total strangers in marriage, and who did not know if they'd find a beast or a lover in their marriage bed."  (Beauty and the Beast", Terri Windling, Endicott Studio) And the modern, Freudian interpretation is scarcely any different, declaring the fairytale a parable about virginal female fears (Beauty  regards male sexuality as brutish and bestial, before coming to womanhood and embracing it). 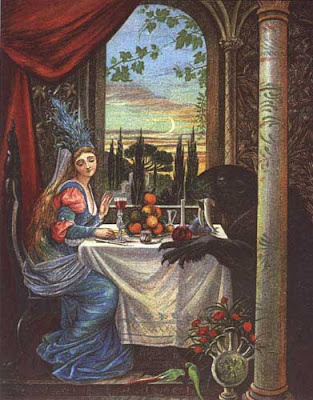 Here's a slightly different take:  When her father loses all his money, Beauty rolls up her sleeves.  She works. She’s physically brave, insisting on saving her father’s life by going to live with the Beast. She’s got moral courage too: when the Beast asks, as he constantly does,

“Beauty, will you be my wife?”

she refuses, because even as she grows more and more fond of him, she is not ready to say yes.

Why aren’t we all cheering? If this is a parable about sex, it’s less about fear of sex – in most of the modern versions, Beauty loses her fear of the Beast months before the end of the story – than it is about resisting pressure, about taking the time to know your own mind.  At last - she leaves it rather late, but that’s narrative tension for you – Beauty realises that this ugly Beast is someone she truly loves. She doesn't even know he's a prince until after she's committed to him.

Finally, the whole ‘poor role model’ criticism is odder than you might think.  Is there any real danger that a little girl  (this sort of angst is always about girls) might read these fairytales and come away from them not with the message that you need hard work, faithfulness, determination and courage to succeed - but that you can loll around wearing pink satin until a prince comes to carry you away? I find that bizarre. Mainly, the princes in fairy stories are symbols of success.  How else can the tale convey it?  There aren’t that many job descriptions in the castle-studded, anonymous fairytale Wald. Cinderella, Beauty and Snow White can't  become tax lawyers or doctors or bankers or members of Parliament, any more than, in 'The Lord of the Rings', Aragorn can blast the Black Riders with a well directed burst of fire from a semi-automatic. Such things simply do not exist in their worlds.

On top of that, isn't it significant that the same disapproval and disquiet is never levelled at the many male characters in fairy stories who marry princesses?  The Brave Little Tailor, the soldier in 'The Blue Light', the soldier in 'The Twelve Dancing Princesses', the boy with the Golden Goose – no one seems to have any trouble recognising, in their tales, a royal marriage as a symbol of well-deserved worldly success.