Magical Classics: 'The Last of the Dragons' by A. de Quincey 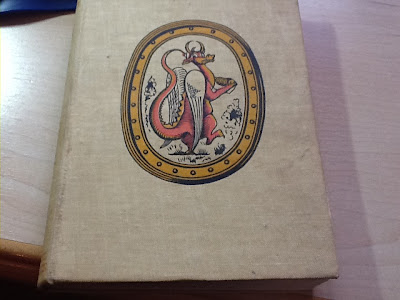 Lucy Coats and the mysterious A. de Quincey's vegetarian dragon:

In Book IX of the History of Animals, Aristotle states:

"When the draco has eaten much fruit, it seeks the juice of the bitter lettuce."

Fruit? Lettuce? Dragons? Some mistake, surely, O Venerable Greek Philosopher? Well no. Not if you're A. de Quincey, author of the favourite fantasy of my childhood - The Last of the Dragons.

Perhaps you may never have thought of a dragon as a vegetarian sort of creature. Perhaps you have always seen it as a creature of blood and gore, rending sacrificed virgin princesses from limb to limb and crunching armoured knights like lobsters.  I suppose I thought like that too until I met De Quincey's Ajax.

This is how de Quincey describes him:

"He was as handsome a creature as ever lived, what with his soft and satiny dark-green skin...and the row of gold-tipped spines that ran down his back.... On his head were two pairs of horns, one shorter and the other longer, like a snail's; but they were for adornment and not for fighting or anything of that sort. His teeth were beautifully regular, and neither too large nor too small. He had a most engaging smile." 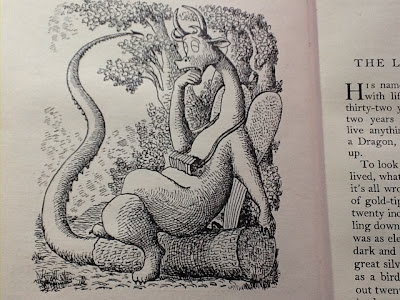 In addition to all this handsomeness, Ajax can blow double smoke rings, tell a great story, draw, play the concertina (with extra twiddles because of his six fingers and two thumbs), sniff out treasure and fly "as fast as a Spitfire". He is also, as mentioned above, a vegetarian, liking grass, leaves, fruit, nuts and, most especially, mushrooms and truffles. However, he has a problem. Ajax is the last of his kind - and he's dead bored of his own company, so decides to find a job with "the next most intelligent creatures to Dragons" - ie us humans, with varying results.

The tale which follows is as entrancing to me now as it was when I was eight. I've just read it again for about the fiftieth time in order to try and work out what it is about this particular fantasy which has drawn me in and held me for all those decades. Is it the grumpy and ghastly Fairy Frowniface, with her wand "made for magical purposes by King Solomon himself'? Is it the mean, green-eyed slinking stinker of a cat, Mrs Maul? Is it the polite would-be dragon-slayer, Prince George of Hesperia, with his insouciant air of bravery, and rat-generalling skills? Is it villainous, black-bearded Baron Terrible and his rough and tumble henchmen, who repent after being turned into an embarrassed frog and a squiggle of tadpoles?  Or is it Ajax himself - the dragon from Venus whose King is the legendary Phoenix? 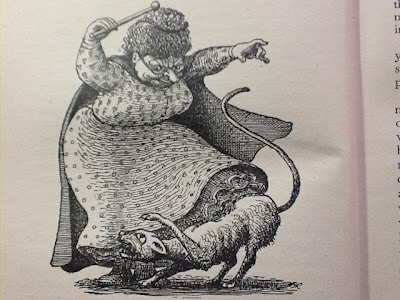 It's all of these and more. While De Quincey's authorial voice has a delightfully old-fashioned tone akin to E. Nesbit and E. Goudge, it's also surprisingly modern in attitude - I think there are few books from that period (1947) which are so respectful of Islamic traditions, or even mention them. But apart from the great storytelling and characterisation, the thing I like best is the rich and uniquely satisfying descriptive prose, which then and now satisfies my inner reader's desire to know what things look like, where they come from, and how they got there.

Who A.de Quincey was is a mystery.  He (or she) only wrote one other book - The Little Half-Giant - which I have just managed to track down a copy of on AbeBooks. The Last of the Dragons was illustrated by Brian Robb, who lectured at the Chelsea College of Art, (inspiring a generation of fantastic illustrators such as Quentin Blake), and later took over from Edward Ardizzone as head of illustration at the Royal College of Art. Blake says of him: "Robb's work had a humane, wry, almost teasing character that makes me wish he had set his hand to more children's books than he did" and I would agree with that. The slightly fuzzy but endearing black-and-white illustrations are a big part of the book's charm for me.  But of this particular de Quincey's life and times I can find no trace, despite it being a literary name of some renown in a sphere other than children's books. If anyone knows more about A. de Quincey, I'd love to hear from you. We fans of Ajax are few and far between, but devoted to the last. If only Hamish Hamilton would bring him back into print.... 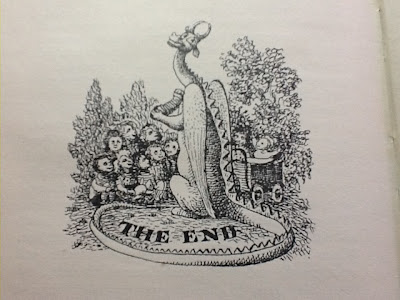 Lucy Coats is reads, writes and blogs magic, myth and fantasy – as you might expect from someone who remarks: ‘I was born in a shrubbery nearly half a century ago and have been looking for fairies in the trees ever since.’ She has written over 25 titles for children, including her Greek Beasts and Heroes series, published by Orion, Hootcat Hill, a fantasy for older children, and her new picturebook, Bear's Best Friend has recently featured on CBeebies Bedtime Stories. Lucy's website is http://www.lucycoats.com/
and she currently blogs at http://lucycoats.tumblr.com/
Posted by Katherine Langrish at 00:35