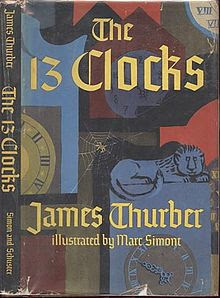 Guggle and Zatch: An Appreciation, by Jane Yolen


If those words—guggle and zatch—resonate for you, I don’t have to spell out the delicious power of one of my favorite (short) magical books. You already know which one I mean.
For the rest of you, hie yourself down to your nearest second-hand book store and seek out James Thurber’s wonderful The Thirteen Clocks. Or find the fairly newly reprinted version (which I haven’t seen but have had reliably reported as containing the delightful original illustrations by Marc Simont, not the later ones by the usually delightful Ronald Searle, but he didn’t get the book the way Simont did.) This addition has an added bonus—an appreciative introduction by the ever-ready battery known as Neil Gaiman.
You can thank me later.
It is a smart and sophisticated little book full of lovely turns of phrases, complex and enjoyable word plays, and bits that worm their way into your ear and vocabulary forever. Like guggle and zatch. (Well, Thurber did write for the New Yorker and drink with the tony lit crowd in New York after all, or rather he drank them all under the table, and my father was one of the designated bring-him-home-on-his-shield-or-in-a-taxi guys.)
And the magical creatures are all wonderfully scary (like the Todal) or deliciously evil (like the wicked duke), or decidedly enigmatic (like the Golux), or sadly mysterious (like Hagga), or strangely bi-loyal (like Hark).
The story feels like an old-fashioned fairy tale with a decided kink. The princess Saralinda in danger, her rescuer the prince-turned minstrel in even more danger. Yet nothing is what we think it is and everything happens exactly as we want it to, even if we don’t realize it at the beginning.
And the prose might as well be a long poem but isn’t, because it has this complex meter and internal rhyme and play on words and all that good stuff.
Two Christmases ago, I gave a rubbed and pre-loved copy to my then eight-year-old twin granddaughters and promptly sat down and read them the first two chapters. (We love to read aloud.) And they asked for one more chapter. And then one more. And I fell in love with the book all over again as they were doing for the first time.  We sat reading in the fading Charleston light and finished just as dinner was on the table.
We would have missed dinner, all three of us, just to hear the rest of the book. But we’d timed it perfectly. As does Thurber, all the way through this perfect (and picture perfect as well, thanks to Simont) magical book.

Warm thanks to Jane Yolen, who needs very little introduction from me.  Her many books (over 300 to date) are on shelves all over the world, and range from picture books for little children, to magical adventures and fairytales for middle-graders, to teenage and adult fantasies, to academic essays.  Her awards include the Caldecott Medal, two Nebula Awards, the World Fantasy Award, three Mythopoeic Awards, the Jewish Book Award, and the World Fantasy Association Lifetime Achievement Award. Six colleges and universities have given her honorary doctorates, and last year she was the first woman to deliver the prestigious Andrew Lang lecture at the University of St Andrews, adding to a rollcall of many notable names including those of John Buchan and JRR Tolkien.