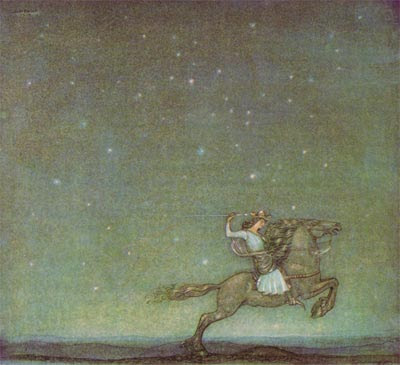 Please don't worry though!  Actually the bad news isn't so bad.  I'm about to take a break from this blog, but I fully intend to be back here some time in the autumn with a new selection of wonderful guest writers, Magical Classics, Folklore Snippets, and  possibly even Fairytale Reflections, as well as anything else that strikes me about the wonderful world of folklore, fairytale and fantasy.

I began 'Steel Thistles' in December of 2009, and I've been blogging pretty well steadily ever since, at least once a week and sometimes more.  I've enjoyed every moment of it. But - and  here is the good news! - during that time I've also been researching and writing my new book. In fact, I even mentioned the book in that very first post of more than four years ago - which is a rather scary thought!  It's the longest I've ever taken over writing a book - I'm one of those 'revise as you go' writers - and I'm now finally beginning the last chapter.

I'll tell you a little tiny bit about it: it's YA (ie: for Young Adults), and it's set in the future, in the same world as the short story 'Visiting Nelson' which I wrote for the Terri Windling/Ellen Datlow anthology AFTER (whose cover you can see in the right hand column). I've been living and dreaming it for so long, I can hardly believe I'm nearly there. (Except, and this is good,the next thing I have to do is write the sequel!)

So, dear reader, I need to take time off, have a breathing space, let the well of inspiration refill - all that stuff. In the mean time, I hope you'll keep visiting, because I'm going to be reposting one of my older posts each week, things you may have not seen - or forgotten.  Also, I'd like to tell you again the story of how this blog got its rather strange title - 'Seven Miles of Steel Thistles'.

I read that, and I thought it was a good metaphor for life in general and the craft of writing in particular. It can be a long hard journey, but you get there. In the end.

Even though I won't be writing new posts for a while, I'll be dropping in myself regularly, so I hope you'll leave comments, and we can keep talking.  And here's the very first post I ever wrote for this blog, with that reference to the now-almost-completed-book.

THE ECONOMY OF MORDOR 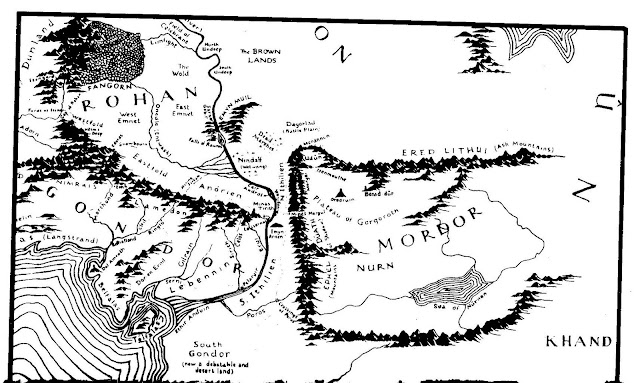 For nefarious reasons connected with my next book, I’ve been investigating towers, and as one thing leads to another and fictional towers tend to carry the mind to Dark Towers, I found myself – and not for the first time – considering the economy of Mordor. You could hardly complain about the amount of creative thought and background research that JRR Tolkien put into creating the world of Middle-Earth, but he was undeniably stronger on history and languages than he was on geography and economics.

A look at the map is instructive.  Mordor is a landlocked country, surrounded on three sides by suspiciously straight lines of mountains.  In the north-west is the Plateau of Gorgoroth, perhaps volcanic; doubtless dry and cold, for no rivers run from it.  To the south-east is the low-lying and bitter Sea of Nurnen.  No navigable rivers flow out of Mordor, though the River Harnen has its source just beyond the southern border.  The Great River Anduin curves provocatively close to Mordor’s western frontier, but there appear to be only two passes through the Ephel Duath: Minas Morgul represents one; the Morannon or ‘Black Gate’ the other.

Trade-routes to the west, therefore, are few and far between.  To the east Mordor lies open, but although we sometimes hear of ‘Easterlings’or ‘Wainriders’ – enemies of Gondor – they are characterised as wild nomadic tribesmen, unlikely sources of supplies.  South Gondor is marked on the map as ‘a debatable or desert land’, and Near Harad, Haradwaith and Khand appear utterly devoid of forests, rivers, cities or hills.  It’s a complete puzzle how the ‘Southrons’ who ally themselves with Mordor find the resources to muster their vast armies mounted on oliphaunts.

Mordor itself is an ecologist’s nightmare: a wasteland of slag and ash, scored with gaping fissures and rocky ridges, governed by an evil all-seeing Eye on the top of a vast Dark Tower not too far from an active volcano which pours out ever more ash and smoke.  Nothing grows.  There’s hardly any rain, and any trickle of water running through the polluted land swiftly becomes poisoned.

In the course of rescuing Frodo from the Tower of Cirith Ungol, Sam raises a question that suggests Tolkien may have experienced a slight frisson of doubt about the non-availability of food in Mordor.  ‘Don’t orcs eat, and don’t they drink?  Or do they just live on foul air and poison?’  Frodo assures Sam that on the contrary, orcs do eat:  ‘Foul waters and foul meats they’ll take, if they can get no better, but not poison.’

Armies, as we know, march on their stomachs.  I can see that an enormous fiery Eye isn’t going to care that in all his wide lands there’s not a bite to eat; and the Nine Ringwraiths probably don’t mind much either.  But the orcs?  How do they benefit from serving Sauron?  And Frodo watches whole armies marching into Mordor via the northern Black Gate:  ‘men of other race, out of the wide Eastlands, gathering to the summons of their Overlord.’   What on Middle-Earth are they thinking of?  What can they expect to gain from rallying to the aid of a Dark Lord who rules a bankrupt country with no agriculture, no exports or imports and no internal food supplies?  There isn’t even the prospect of future riches if Gondor falls to Sauron – for in that case Gondor itself will become a similar wasteland.

In any normal world economy, Mordor would be over its ears in debt.  Refugees – orcs, Easterlings and Southrons – would be streaming westwards in the hope of better lives for themselves in Gondor.  Rather than closing its gates against an invading army, Minas Tirith would be coping with an influx of immigrants.  The tough and hardy orcs would hire themselves out as cheap labour in exchange for a few coppers and a square meal.  Mounted bands of Rohirrim would patrol the borders of Rohan to turn away fugitives.  Dark Lord or no Dark Lord, Sauron would have no choice but to borrow money from the coffers of Minas Tirith – or from the metal-rich dwarfs – in order to keep Mordor from emptying itself.  The power is with the purse strings.

Still, The Lord of the Rings is not a political satire.  Perhaps we can be grateful that Tolkien didn’t look too closely at the economy of Mordor.  Middle-Earth is a polarised world.  The brave, the beautiful and the good are all grouped together on one side, while the wicked, the ugly and the cruel gravitate together on the other. So let’s hear it for the all-powerful Dark Lord, Ruler of the Wastelands, Commander of Ringwraiths, Leader of the Axis of Evil.

So long as we remember he doesn’t exist.

Picture credits: John Bauer: illustration from The Ring - the link is here, with a fascinating essay about visual influences on Tolkien's world: http://www.touchstonemag.com/archives/article.php?id=15-01-041-f

Map of Mordor, from The Return of the King.

Posted by Katherine Langrish at 02:04