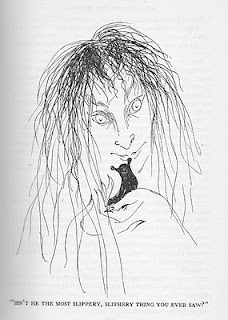 Macbeth:  How now, you secret, black and midnight hags?  What is’t you do?
Witches: A deed without a name.

“Witch” is not a neutral word. You can have good wizards or bad wizards, it seems, and when you encounter a fictional wizard you cannot be certain what leanings he may have.  (Gandalf is good, Saruman is bad.) But the default option for a fictional witch is that she will be wicked, unless the qualifying adjective ‘white’ is used. There is a gender-based difference here.


My friend the YA writer Leslie Wilson has pointed out to me that African witches can be men. I wonder, though, if there are translation issues here, as there were for the ‘witch’ of Endor.  Who was it who first chose ‘witch’ as the correct translation for whatever the African words for these people are?  Why ‘witch’ rather than ‘sorcerer’ or ‘shaman’?  The name you give to something affects or reflects the way you think about it.  I notice that we in the west tend to refer to African ‘tribes’, which sounds primitive.  When we refer to ourselves we speak of nations – or, on a more familial level, clans.  Was ‘witch-doctor’ a term used in disparagement?  Someone reading this may know.

But in any case, I still think the ‘wicked’ aspect of the witch is linked to male fear of female power.  Ursula LeGuin’s Earthsea books turned into an almost philosophical exploration of this thought. In the first book, ‘A Wizard of Earthsea’, wonderful and complex though it is, the usual stereotypes apply, as expressed in a couple of Gontish proverbs: Weak as women’s magic or  wicked as women’s magic.  ‘Good’ women in the book are unlearned and domestic.  The others are either ignorant crones with a few half-understood cantrips and charms, or else powerful, beautiful, ambitious and ruthless.  Reading the Earthsea books through in sequence is to follow LeGuin’s impressive journey from acceptance of this stereotype, to questioning of it, to utter rejection. 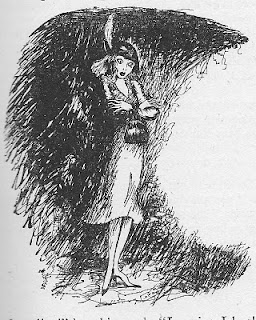 And in this spirit, a spirit of subversive enjoyment, I think many of the witches of children’s fiction have been conceived.  I’m going to start off with a favourite from my own childhood, out of print now for many years: Beverley Nichols’ fantasy series   for children beginning with ‘The Tree That Sat Down’.  Here we meet the unforgettable Miss Smith.  She looks like a Bright Young Thing, ‘as pretty as a pin-up girl’; she is actually three hundred and eighty-five years old; her familiars are three quite disgusting toads whom she keeps in the refrigerator; she puffs green smoke from her nostrils in moments of stress; she flies a Hoover instead of a broomstick, and she takes an energetic delight in wickedness with which the author clearly had enormous fun.  As Miss Smith walks through the wood (on her way to make trouble for little Judy and her grandmother who keep a shop in the Willow Tree),

… all the evil things in the dark corners knew that she was passing… The snakes felt the poison tingling in their tails and made vows to sting something as soon as possible.  The ragged toadstools oozed with more of their deadly slime… In many dark caves, wicked old spiders, who had long given up hope of catching a fly, began to weave again with tattered pieces of web, muttering to themselves as they mended the knots…

Miss Smith’s fetching exterior allows her to inveigle her way into all sorts of places.  For example, she deals with the evil Sir Percy Pike who preys upon widows and orphans by lending money at extortionate rates.  Miss Smith is ‘also very keen on widows and orphans’, and – driven by professional jealousy – presents herself to Sir Percy in the guise of a beautiful widow, bedizened with diamond rings.

At the sight of these rings Sir Percy began to dribble so hard that he had to take out a handkerchief and hold it over his chin. … No sooner had he shut the door, than she spat in his face, hit him sharply on the chin with the diamond rings, knelt on his chest, and proceeded to tell him exactly what she thought of him.

You can’t help cheering – even though Miss Smith is just as bad herself.  She comes into all Beverley Nichols’ children’s books: the others are ‘The Stream that Stood Still’, ‘The Mountain of Magic’ and ‘The Wickedest Witch in the World’.  Though she is of course foiled on every occasion, hers is the energy that drives the narrative.

Next on my list is the witch Sylvia Daisy Pouncer in John Masefield’s ‘The Midnight Folk’ (Heinemann, 1927) and – though appearing to a lesser extent – in the sequel, ‘The Box of Delights’.  Little Kay Harker is a lonely, imaginative child: the book is peopled with his imaginary friends, toys, pet cats and ancestors who may or may not be ‘really there’.  His life is ruled by the strict and over-fussy governess Miss Pouncer:

“Don’t answer me back, sir,” she said.  “You’re a very naughty, disobedient little boy, and I have a very good mind not to let you have an egg.  I wouldn’t let you have an egg, only I had to stop your supper last night.  Take off one of those slipper and let me feel it.  Come here.”
Kay went up rather gingerly, having been caught in this way more than once.  He took off one slipper and tended it for inspection.
“Just as I thought,” she said.  “The damp has come right through the lining, and that’s the way your stockings get worn out.”  In a very pouncing way she spanked at his knuckles with the slipper…

It’s perhaps not surprising, then, that at night when the Midnight Folk reign in the old house, Miss Pouncer is cast in the role of the chief witch:

There were seven old witches in tall black hats and long scarlet cloaks sitting round the table at a very good supper.  They were very piggy in their eating (picking the bones with their fingers, etc) and they had almost finished the Marsala.  The old witch who sat at the top of the table…had a hooky nose and very bright eyes.
“Dear Pouncer is going to sing to us,” another witch said.

And Pouncer does, to great effect:

“When the midnight strikes in the belfry dark
And the white goose quakes at the fox’s bark,
We saddle the horse that is hayless, oatless,
Hoofless and pranceless, kickless and coatless,
We canter off for a midnight prowl…”
All the witches put their heads back to sing the chorus:
“Whoo-hoo-hoo, says the hook-eared owl.”

No wonder Nibbins, Kay’s cat, exclaims, “I can’t resist this song.  I never could.” Wicked the witches may be, but once again the author relishes their energy, their subversive delight.

Another small boy in the clutches of a powerful female is the Wart in the hands of Madam Mim, in T.H. White’s “The Sword in the Stone”.  This passage was cut from “The Once and Future King” – perhaps White thought it was too burlesque for the soberer, more epic quality of the longer work?  (The witch of “The Once and Future King” is of course the Queen of Air and Darkness, the terrifying Queen of Orkney.)  Madam Mim is a humbler creation, but probably all too familiar to any little boy whose mother or nurse undressed him for an unwanted bath.  Madam Mim forcibly undresses The Wart with an eye to popping him in the pot and cooking him, singing a chicken-plucking song as she does so:

“Pluck the feathers with the skin
Not against the grain-oh.
Pluck the small ones out from in,
The great with might and main-oh.
Even if he wriggles, never mind his squiggles,
For mercifully little boys are quite immune to pain-oh.”

The Scots writer Nicholas Stuart Grey created another memorable witch in ‘Mother Gothel’, the desperately evil witch in “The Stone Cage” (Dobson 1963), his retelling of the fairytale Rapunzel.  Here, the fun and energy of the story belongs to the narrator, Mother Gothel’s cat Tomlyn – whose cynical and laconic style belies the fact that his heart is in the right place.  The witch herself is powerful, terrifying, slovenly, sluttish, but ultimately pathetic and redeemable.

More wicked witches next week – this time, some of the darker and more serious treatments.
© Katherine Langrish 23 August 2010
Picture credits:
Miss Smith the witch: illustrations by Isobel and John Morton-Sale from Beverley Nichols' 'The Tree that Sat Down'

Posted by Katherine Langrish at 02:03