I once read – I think it was an essay by C.S. Lewis – that to have weird or unusual protagonists in a fantasy world was gilding the lily: too much icing on a very fancy cake.  And then he cited Lewis Carroll's Alice as a good example of an ordinary child to whom strange things happen.  I’m not sure Lewis was right on either count.

Of course it’s true that many heroes and heroines in classic 20th century fantasy are ‘ordinary’ – hobbits, for example, and Lewis’s own Pevensie children, and Alan Garner’s Colin and Susan in the ‘Weirdstone of Brisingamen’ and ‘The Moon of Gomrath’.  There’s pleasure in seeing an ordinary person rise to the occasion, as when Bilbo Baggins turns out to be a very good burglar indeed, or when Frodo self-sacrificingly takes on the burden of the Ring.   Tolkien must have seen many instances of ‘ordinary’ heroism in the trenches of World War I.

And I’d agree that it's helpful to be able to identify with characters in fantasy.  For me, one of the difficulties of Mervyn Peake’s Gormenghast trilogy is that apart from Titus and Fuschia there are too few characters for whom one can feel any empathy.  Although I love the setting and the descriptions of the immense castle and its strange ritual life, I become emotionally exhausted by Peake’s cast of grotesques.  Peake had, it’s fair to say, a line on the darker side of life.  And not coincidentally for this post, he illustrated the two Alice books.  Just look at his picture of Alice emerging out of the mirror into Looking-Glass Land, and compare it with Tenniel’s. 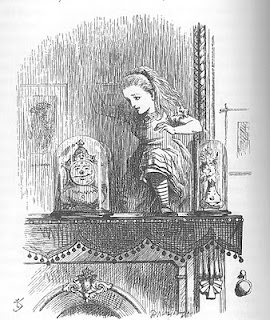 Tenniel’s Alice is barely halfway through the mirror.  She looks not at us, but around and down at the room with an expression of calm interest.   She is a little excited, perhaps, but not alarmed.  We don’t feel there in the room waiting for her: instead, we are looking through the window of the picture.  We can glimpse part of the room.  The grinning clock is strange but not threatening.  The room itself appears to be well lit.  In Tenniel’s drawing, Alice is firmly planted on the mantelshelf.  She has a chance to look around, and will jump down when she chooses.


Peake’s Alice appears through the misty glass like an apparition.  She looks straight into our eyes, as if we are the first thing she sees. Her face is very white, and so are her hands, outspread as if pressing through the glass, but also gesturing an ambiguous mixture of alarm and conjuration.  She is coming out of darkness, and there are no reflections to suggest what the looking glass room may contain – except us, for we are already there, waiting for her.  (We may not be friendly).  With one leg waving over the drop, she is about to fall off the mantelshelf into the room – for her position is precarious. 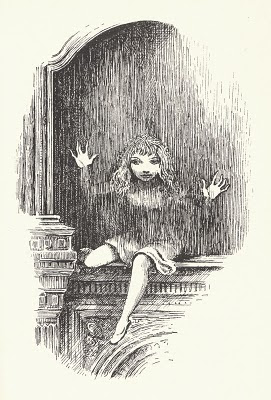 Even the 1951 Disney cartoon recognised the tough element in Alice’s character, and the latent terror in Wonderland.  They made her into a prim little cutie, but she still managed to stand up to the frightening Queen of Hearts and the Mad Hatter. I still haven't seen the Tim Burton movie, and I'd be interested to hear from anyone who has.

So how ordinary is Alice, after all – is she really just an innocent and rather pedestrian Every-little-girl in a mad, mad world?  Or does she have her own brand of illogical weirdness with which to combat the weirdness she finds?  I think she does, and I think modern readers often miss it.  We look at the blonde hair, the hairband, the blue dress and the white pinafore, and forget her speculative, inventive mind, her impatience - and passages like this:

And once she had really frightened her old nurse by shouting suddenly in her ear, “Nurse!  Do let’s pretend that I’m a hungry hyaena, and you’re a bone!”

Compare that with George MacDonald’s heroine in ‘The Princess and The Goblin’.  Can you imagine Princess Irene doing anything so bizarre?   Irene is truthful and brave, but always a little lady: the Victorian gentleman’s ideal child.   The adventures that happen to Irene are not of her own creation.  But it’s Alice’s weird imaginings – about what might be happening on the other side of the glass – that take her into Looking Glass Land at all.  Alice is both a credibly strong-minded little girl – capable of losing her temper, of defending herself in the White Rabbit’s house by kicking Bill the lizard up the chimney – and a surreal philosopher, as some children are.  She is the maker of her own imaginary worlds, and when they get too chaotic, she ends them – amid considerable violence.  In the illustration, Tenniel gives her face an angry, narrow-eyed intensity.  The cards may seem to be attacking her, but in fact her challenge has reduced them to a harmless and lifeless shower. 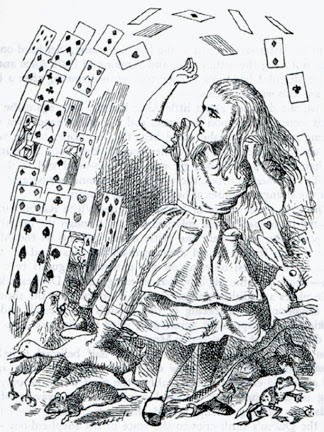 “Who cares for you?” said Alice, (she had grown to her full size by this time) “You’re nothing but a pack of cards!”
At this the whole pack rose up into the air and came flying down upon her: she gave a little scream, half of fright and half of anger, and tried to beat them off…


While as for 'Through the Looking Glass'... 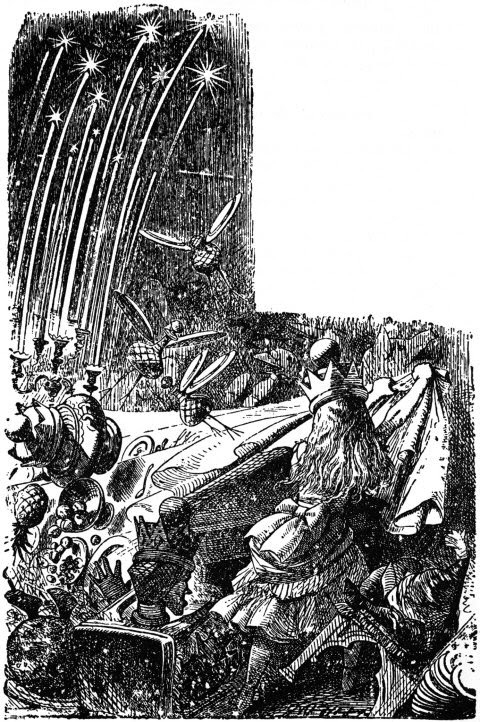 “I can’t stand this any longer!” she cried as she jumped up and seized the tablecloth with both hands: one good pull, and plates, dishes, guests and candles came crashing down together in a heap on the floor.
“And as for you,” she went on, turning fiercely upon the Red Queen… “I’ll shake you into a kitten, that I will!”

Through the Looking-Glass, and What Alice Found There


Tenniel’s illustrations catch the vivid threat and drama of the situation.  Alice is active, destructive, tugging the cloth off the table.  (By contrast, in Peake's illustration of the same moment, Alice and the two Queens are being sucked helplessly into a black whirlpool lit by three sinister candles.) 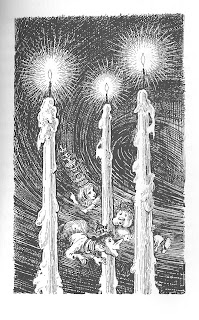 Some books with dream endings can feel like a cheat.  ‘And she woke up, and it was only a dream’ seems to negate all that has happened.  John Masefield's otherwise marvellous  'The Box of Delights' is a case in point.  But for Alice, the dream settings are absolutely necessary.  She has not strayed into a pre-existing Narnia like Lucy Pevensie.  You can't imagine anyone else going there.  Alice is the Alpha and Omega of her own fantasylands, the creator and destroyer of worlds.  She sleeps, and they come into existence. When she awakes, it is utterly logical that Wonderland and Looking Glass Land shall cease to be.

Posted by Katherine Langrish at 07:25