The Weirdstone of Talybont and FIRST LIGHT 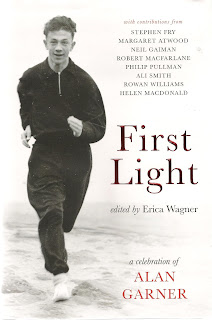 On a bright spring day last year I was sitting on a bank beside a deep-cut track high up in the Brecon Beacons.  I’d walked far enough, but my husband David wanted to get to the top of the next little peak. He went on ahead with our brown-spotted Dalmatian dog Polly. I sat on the bank admiring the view over the Talybont reservoir, when a blue sparkle caught my eye.  From the track near my feet I picked up an extraordinary stone. It had weathered out of the layers of old red sandstone of which the hill was formed, tumbled on to the track and split in two – probably not long before, for the break was still sharp-edged and clean. On each of the fractured faces was traced a glittering blue lozenge. My mind leaped to a much-loved childhood classic.  ‘It’s a Weirdstone’, I thought... 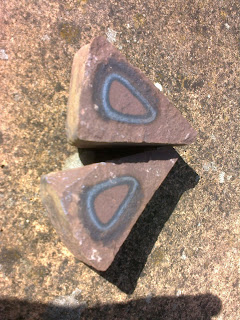 It so happened that a week later I was at the Jodrell Bank Observatory in Cheshire,  listening to Alan Garner argue with forthright wit and passion that there is no fracture, no true gap between the arts and the sciences.  All human creative endeavour is part of a whole – as my stone was before it split in two. 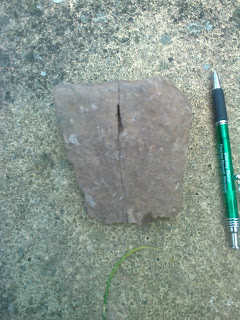 And a month later I was honoured (to my great surprise and delight) by an invitation to contribute to ‘First Light’, a collection of essays written in celebration of Garner’s 80th birthday. I was frankly awed by the other contributors. Not only writers but archeologists, physicists, artists, historians – Margaret Atwood, Neil Gaiman, Francis Pryor, Rowan Williams: the list runs on.

As I wrote of how Alan Garner’s books had changed my imaginative life, it was the finding of the Weirdstone that opened the way into what I wanted to say and how to say it. I shan’t repeat any of that, but here’s something I didn’t include in the essay: as soon as I picked that stone up, it was as if I’d entered a world of fiction.  I looked up the track to the place where it vanished over the skyline, a quarter of a mile away.  High on the sharp summit to its right I could see the distant figures of David, and Polly the dog.  I waved to David. He waved back, then pointed. You remember how in ‘The Weirdstone of Brisingamen’ the svart-alfar come pouring out of the Devil’s Grave to attack the children, Colin and Susan?  Right on cue, over the skyline came a band of goblin riders – half a dozen of them, bucketing down the track on little buzzing black motorcycles, the sun glinting off their black helmets.

I knew what they were but the dog didn’t, and she didn’t like the look of them.  And she could tell they were heading my way. Within seconds of their appearance she was hurtling down the hillside after them, racing to my aid, as white against the green as the standard of Theoden King himself (if I may change fantasies for a moment).  It was terribly funny but also very heroic and touching.  With Polly pounding up behind, the goblin riders reached me and passed,  each raising a gauntleted hand  in courteous acknowlegement.

These things do happen if you pick up Weirdstones. Coincidence and magic seem to follow Alan Garner as seagulls follow ploughs.

I haven’t had time yet to read all of the essays in ‘First Light’, but enough to be able to tell you it’s a treasure trove. You’ll find essays by Elizabeth and Joseph Garner, by Teresa Anderson, the Director of the Discovery Centre at Jodrell Bank, by Philip Pullman, Elizabeth Wein, Bel Mooney, Robert Macfarlane… by David Almond, Frank Cottrell Boyce and Amanda Craig… and of course by the editor Erica Wagner, whose marvellous idea it was. It was crowd-funded, published by Unbound, and testifies to the extraordinary impact of Alan Garner as a writer and a man on so many different people in so many different walks of life. 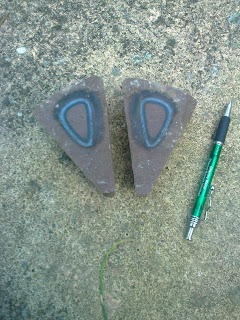 Posted by Katherine Langrish at 05:07