'Cleo' and 'Chosen' - the young Cleopatra novels by Lucy Coats 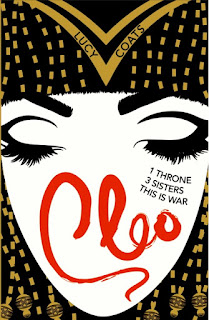 Full disclosure here. Lucy Coats is a friend of mine. This basically means that a couple of years ago she told me she was writing a YA novel about Cleopatra’s childhood and coming-of-age, set in a magical version of Ancient Egypt where the gods really exist, and first of all I fell over with jealousy-tinged admiration at the the sheer brilliance of the idea, and afterwards I got to read some of the drafts, which were also brilliant. The first book, ‘Cleo’, came out last year and the second, ‘Chosen’ has just been published by Orchard. I love them both - and what luscious covers!


Though everyone has heard of Cleopatra the Queen, her childhood remains a mystery. As Lucy says:
Nobody knows much about Cleopatra’s path to the Pharoah’s throne, beyond the bare minimum of speculative dates, and even those are disputed. Who her mother was, when exactly she was born, what she really looked like are all mysteries. Her early life is a big fat hole in history, which I have jumped into with both feet and tried to fill.
Such lack of solid information may be infuriating to the historian but for a writer it’s a gift beyond dreams, and the stuff of dreams is exactly what Lucy has woven into these two splendid historical fantasies.  In ‘Cleo’ we first meet the child Cleopatra in a crowded palace room, fighting back tears at her mother’s deathbed. But this Cleopatra can see the gods themselves.

My mother opened her pale, bluish lips slightly and sighed. Only I could see the misty golden ka soul form that rose upwards from her body – a perfect mirror image of her mortal self. Only I could see the door opening in the air, the tall jackal-headed figure stepping from his reed boat and slipping into the mortal world.  Only I could see his immortal hand stretching out to draw my mother’s soul through and sail off with her to the underworld realm.  She held out her own hand to him and didn’t even look back once.

Threatened with murder by her two half-sisters, Cleo escapes from Alexandria with her best friend and slave-girl Charm, finds sanctuary in a far-off temple of Isis and becomes a priestess. There she learns her beloved goddess has plans for her. It’s up to Cleo to return to Alexandria, find a map locating the ancient shrine of the goddess, wipe out the treachery of those who betrayed her, and rescue Egypt from the evil god Am-Heh. Luckily Cleo has allies. Not only Charm, but the handsome young Khai, whose dark eyes stir many a heartbeat as Cleo grows into a warm-hearted, susceptible teenager.  But not just any teen. Cleo may be as flirtatious and funny as Louise Rennison’s Georgia Nicholson, but she’s also a princess of Egypt, brave and ambitious, proud of her status and descent, royal to her fingertips.  Lucy Coats never forgets the future fame of this young girl.  Throughout both books we find little hints of Shakespeare’s ‘Antony and Cleopatra’ – Cleo’s maid Charm, for example, must be that very Charmian who ‘loves long life better than figs’ but who (we know) one day will follow her mistress into death.  The friendship between the two girls is as just as much if not more important than Cleo’s romantic interests – and it will be lifelong.

In ‘Chosen’ (which if anything is an even better book than the first), Cleo as ‘the Chosen One of Isis’ journeys through the deserts of North Africa to the oracle at Siwah, and thence to Rome to bring back her exiled father, sweep Berenice from the throne and destroy the evil Am-Heh. And she meets a young Roman soldier called Marcus Antonius on the way…

What I love about Lucy’s version of Egypt is how rich, colourful and intense it is, full of sounds, scents and warm breezes. In a passage from ‘Cleo’, our sensual girl enjoys a massage after a temple dance:

The smell of rose-and-cinnamon oil filled the warm air, and the thin coverlet lay heavy on my naked hips and legs, almost too hot for this summer day. Through my half-closed eyes I could see the black silhouettes of swallows, dipping and darting against the harsh blue of the the early Akhet sky, hunting for airborne bugs over the Nile…

In ‘Chosen’, in more warlike mood, Cleo and her comrades approach an oasis after a long and grimy desert march:

We rode up out of the black sand in the heat of the afternoon and arrived at the oasis the desert tribes called Shore of the Sea. …The camels started to run as they smelt the fresh water …  The green was intoxicating to my eyes, and the smell of it almost an assault on my nostrils. I slid down from Lashes as she dipped her muzzle in the water, snorting, shaking her lips and blowing great clouds of bubbles as she slurped and sucked.
Total immersion in the past!  You can sense how much fun the author is having, and it’s infectious. Quite simply, I enjoyed both books enormously. The two titles are suitable for older children, perhaps from thirteen up. Lucy doesn’t flinch from the dark side – there’s a fair bit of physical violence; you’ve got to be able to cope with some characters being eaten by crocodiles, for example – as well as a non-explicit, off-stage rape which is handled seriously but sensitively.  However great the danger though, we can be sure Cleo and her friends will win through, with the supernatural power of Isis at their back and, leading from the front, Cleo herself, crackling with energy, life, and determination to fulfill her destiny as one of the most famous Queens who ever lived. 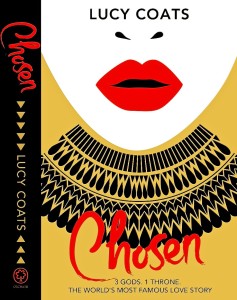 "CLEO" and "CHOSEN" by Lucy Coats are published by Orchard Books. You can find out more about Lucy and her books at her website, http://www.lucycoats.com/
Posted by Katherine Langrish at 08:24