In the Green Chapel 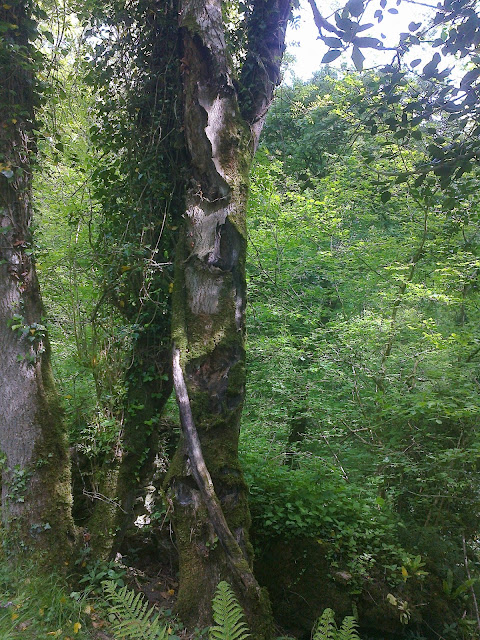 On the last weekend in May my husband and I went down to Dorset for a two-day holiday, the first for many months. It was a fraught time; my mother was failing, increasingly frail after a prolonged hospital stay.  But she was home at last, where she wanted to be. A wonderful friend was caring for her, and family members visited daily.

On the second (and final) day of our break we decided to explore a small wood tucked into a fold of the downs between Puncknowle and Little Bredy. Somewhere in the middle of it, according to the map, there was a ruined chapel. Leaving the car on the edge of a rutted track, we set out in the teeth of a cold wind along a deserted, stony lane. The tops of trees were visible over fields to our right, but the lane kept at a distance for some time. After about a mile it bent downhill; we climbed a stile and entered the wood.

It felt very old and very quiet, and maybe it was my mood, but it felt sombre. Fangorn Forest came to mind, though later another comparison occurred to us, Robert Holdstock's Mythago Wood -- in which the naive and bewildered adventurer penetrates deeper and deeper into a limitless, terrifying, mythical past -- a scant square mile of English woodland from whose borders you may never emerge. Mossed-over tree trunks leaned this way and that, ferns grew on the boughs, all was wet and green. We crossed a slimy plank bridge. A crow crouched in the ditch beneath, sick perhaps, for it never moved. 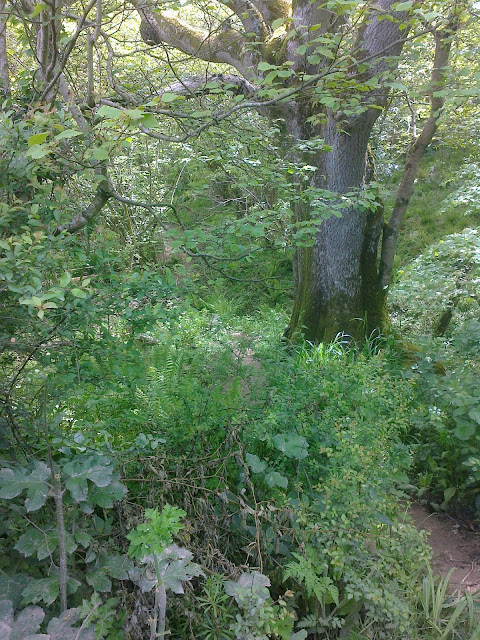 The wood wasn't large, but it was remote, deep in the country, and it wrapped us in damp silence. As we followed the narrow path I felt a sort of awe. The place wasn't friendly. Not inimical, but it was secret, closed, watchful. We trod carefully, not sure what to expect or where to look for the ruins. Then we saw them. The path ran straight in under the archway. 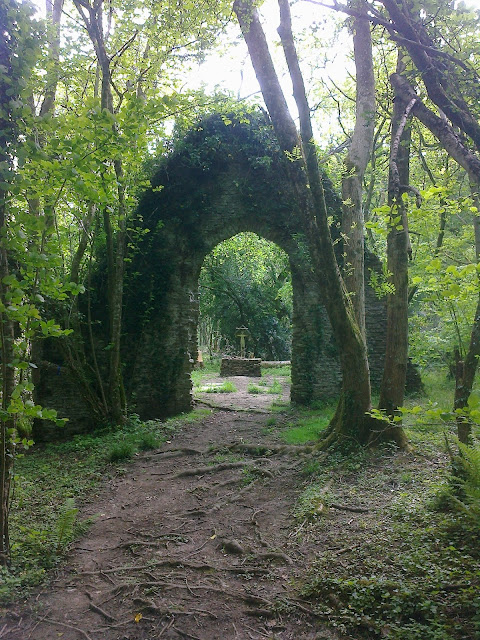 We went through into the chapel. No one was there, and nothing was left of the chapel except the archway itself: the once-sacred space was now roofed by air and open to the whole wood, but a small altar and wooden crucifix at the eastern end gave an unexpected, powerful aura to the place. A simple ruin can seem anonymous, irrelevant, empty. This one still meant something. It had focus. 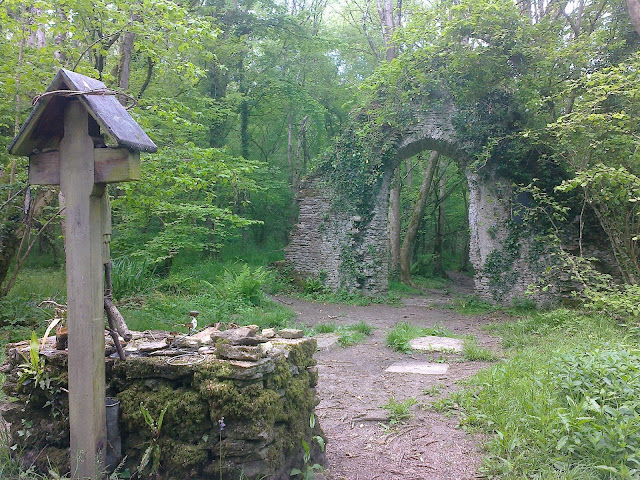 The outspread arms of the carved wooden Christ seemed to greet with measured, severe acceptance all comers, of whatever faith or none.  Behind the altar lay a fallen tree. Someone with a chainsaw had cut the stump into a rustic throne, the raw yellow wood harsh and startling against the green. 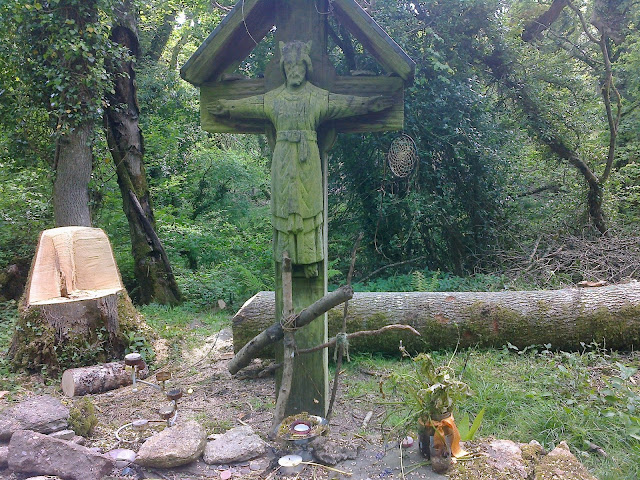 Offerings lay on the altar. A jar full of bluebells, now dead. Twig crosses, coins, smooth pebbles from the beach, tea lights, sprigs of holly.  People had come here recently, to bow their heads perhaps to Christ, perhaps to the spirit of the wood, and in either case - what? - perhaps to experience a sense of awe, humanity's shiver of insignificance before nature and the greatness of the world. 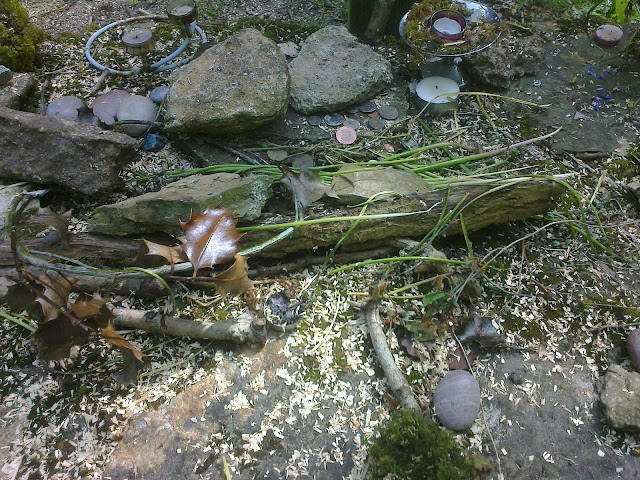 It was a space which felt more pagan than Christian, at least as we understand modern Christianity, though a medieval monk might have recognised it, for the Cistercians built this chapel and dedicated it to St Luke, traditionally a physician and healer.  You could imagine Robin and Marian making their vows here. 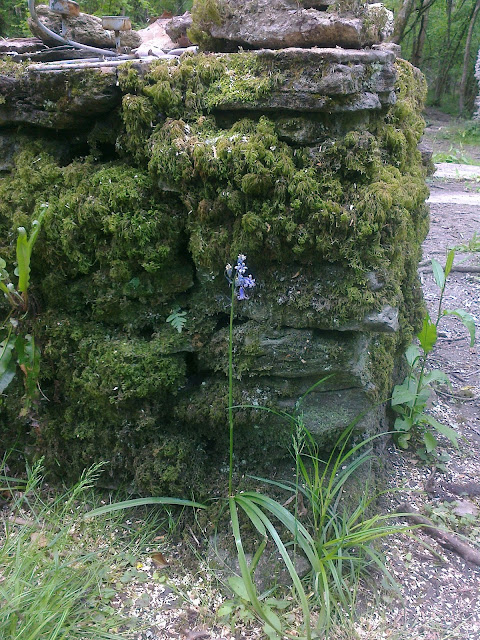 Bluebells and ferns sprang from the stones of the altar, and someone had hung a dream-catcher from the crucifix. In the earth floor of the chapel were three grave-slabs, recent burials from the mid 1940s, presumably of some previous owners of the wood.  'And in that sleep of death, what dreams may come...?'  Maybe the dream-catcher helps. Or maybe in this woodland setting, they sleep sound. 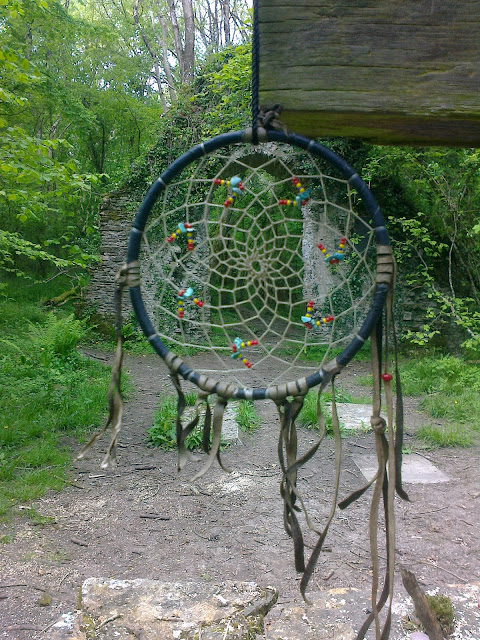 Some places do have auras; I remember years ago visiting Iona in the Hebrides, the Holy Isle: it was full of light, even the stones on the beach seemed to shine and the waves were like glass. This, by contrast, was an uncomfortable spot. Calm, intense: numinous even. But brooding, subduing. We left, glad to have seen it but glad too, on my part at least, to be gone.

The path took us uphill, out of the wood. We skirted an open field, crossed a farmyard, struck the lane and a narrow road running down valley. It was late morning, and my phone rang. My brother's voice. Bad news, he said. She's had another stroke. She's going. No, not yet, but very soon.

As we ended the call, I wished for a moment I had said a prayer in the Green Chapel, and then I thought, no. Whatever it may be like on other days, on the day we visited it wasn't the place in which to remember my mother, who was all sunshine. And yet it did speak to me -- in words of resignation, melancholy and loss, like fine rain that softens the earth and air and evaporates into mist.

Then again, maybe we simply take our moods with us. I don't know. 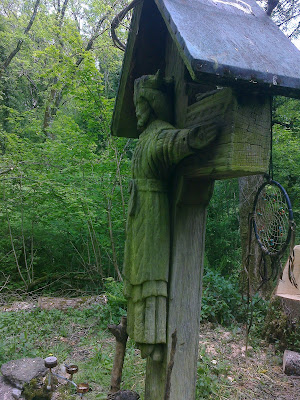 Posted by Katherine Langrish at 06:24