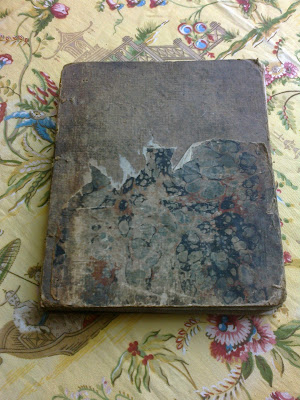 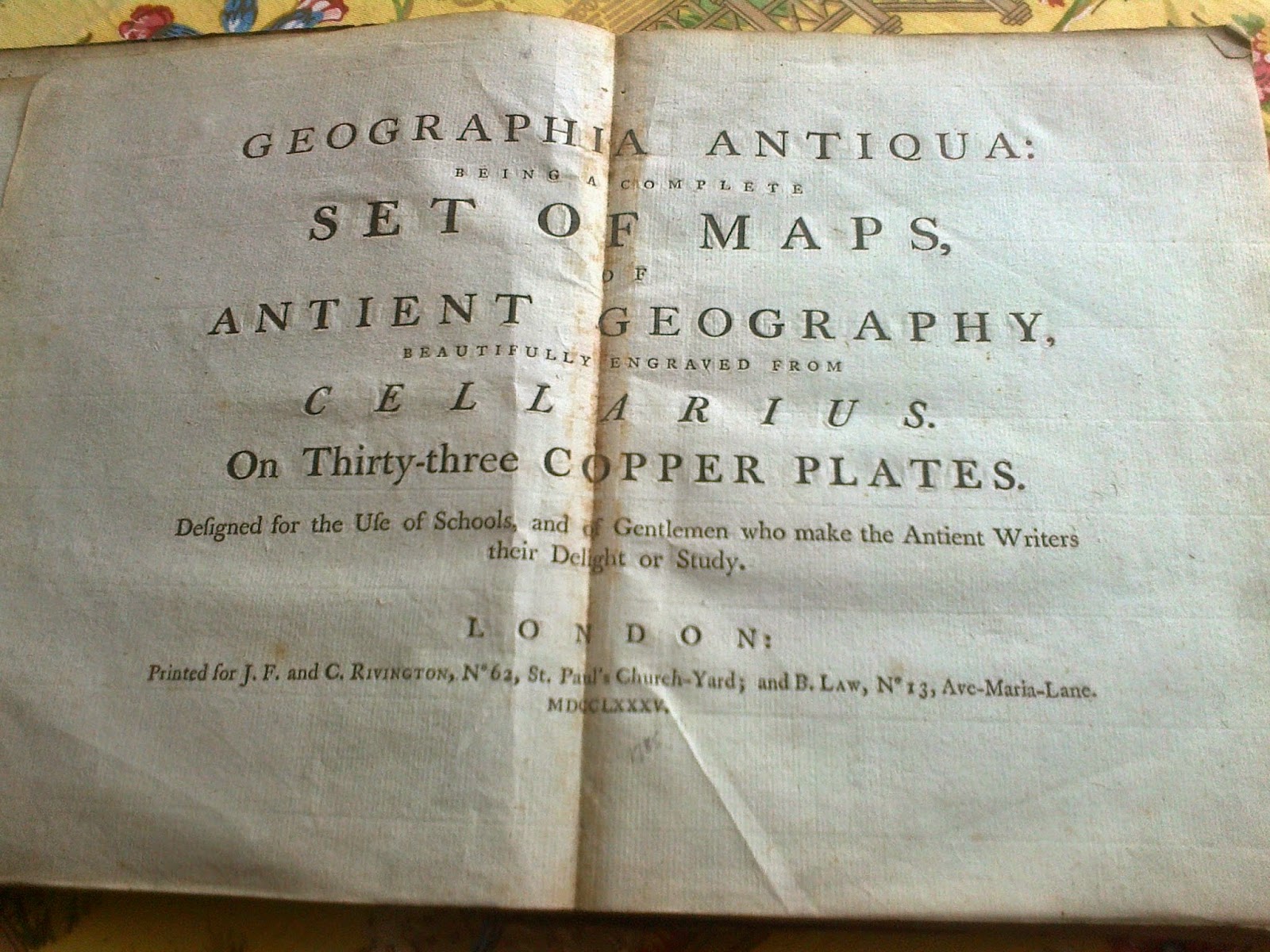 It's an atlas of the classical world dated 1785, 'Designed for the Ufe of Schools, and of Gentlemen who make the Antient Writers their Delight or Study.' The maps cover all areas which such Gentlemen might wish to consult while following the journeys of Herodotus, or perhaps the campaigns of Alexander, or the Gallic Wars. 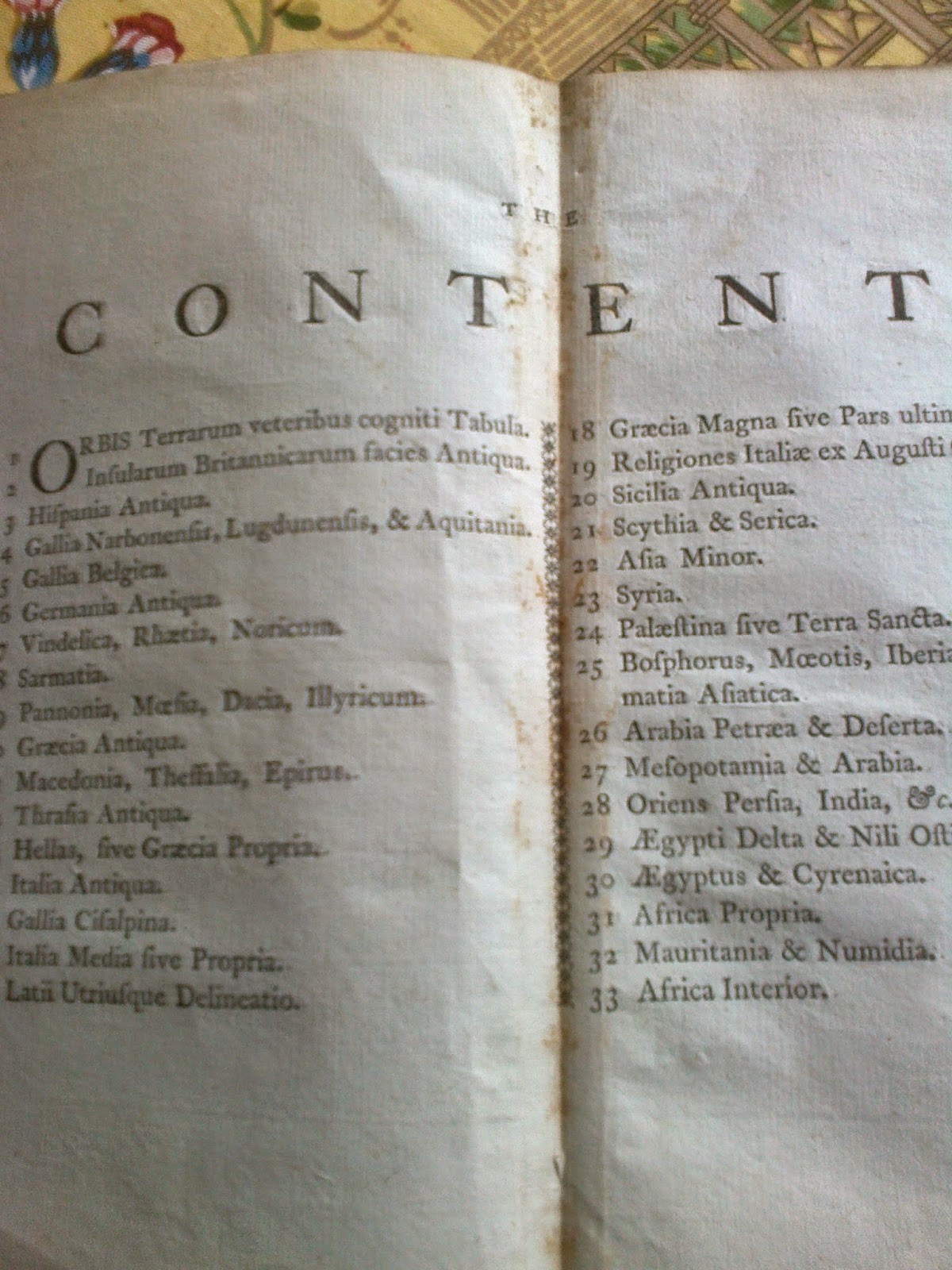 Of course the maps are deliberately limited to those parts of the world known to ancient geographers, but they aren't themselves 'Antient'. They're drawn to an eighteenth century knowledge of the shapes of coasts and continents. 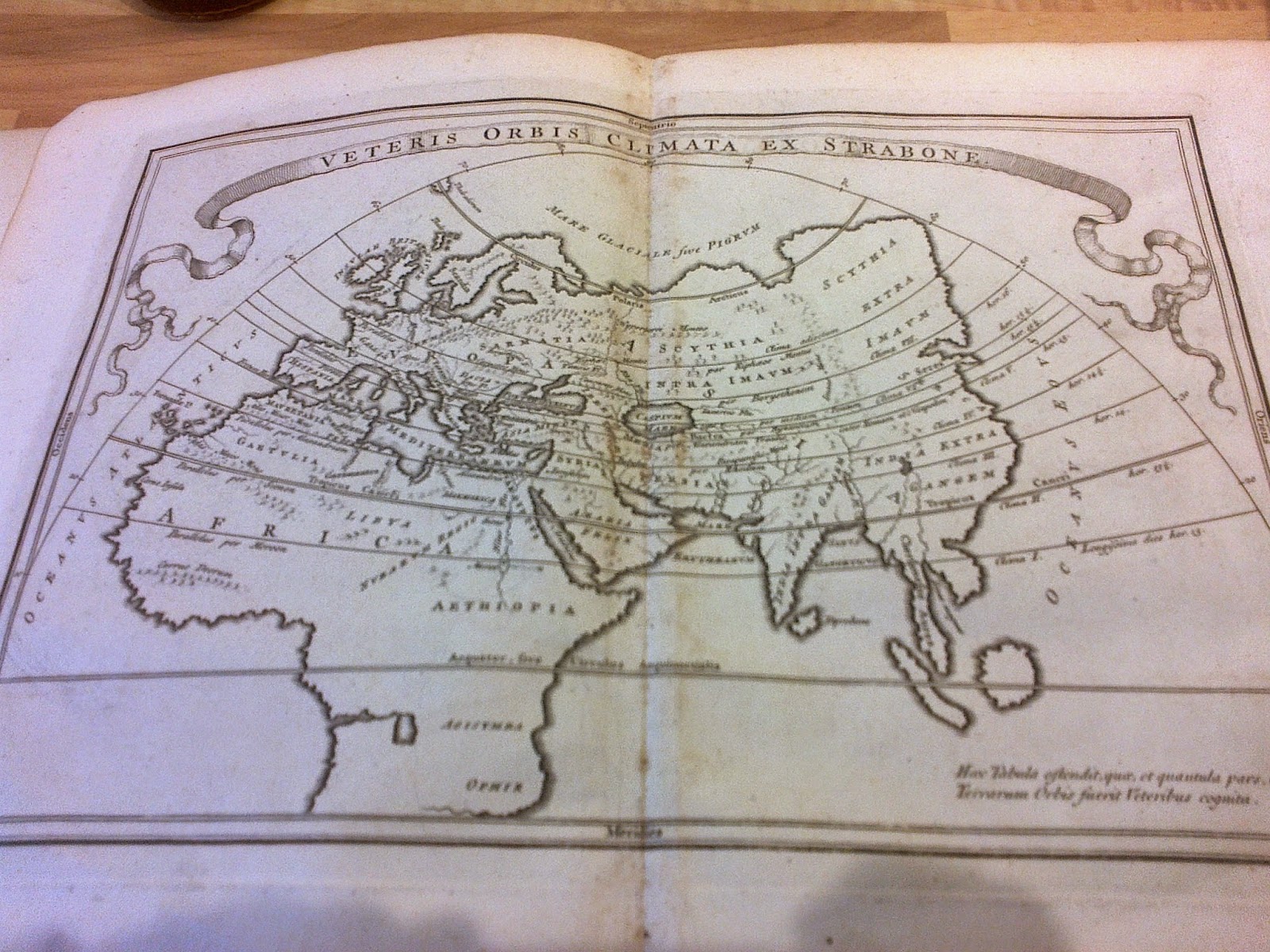 Like any historical atlas of today, they fit the old stories into what was then a modern frame. Here for example is Mesopotamia, with squiggly rivers, the Tigris and the Euphrates. A graceful line of mountains (the Taurus range, somewhat attenuated) drapes itself across the top of the map like a paper-chain. 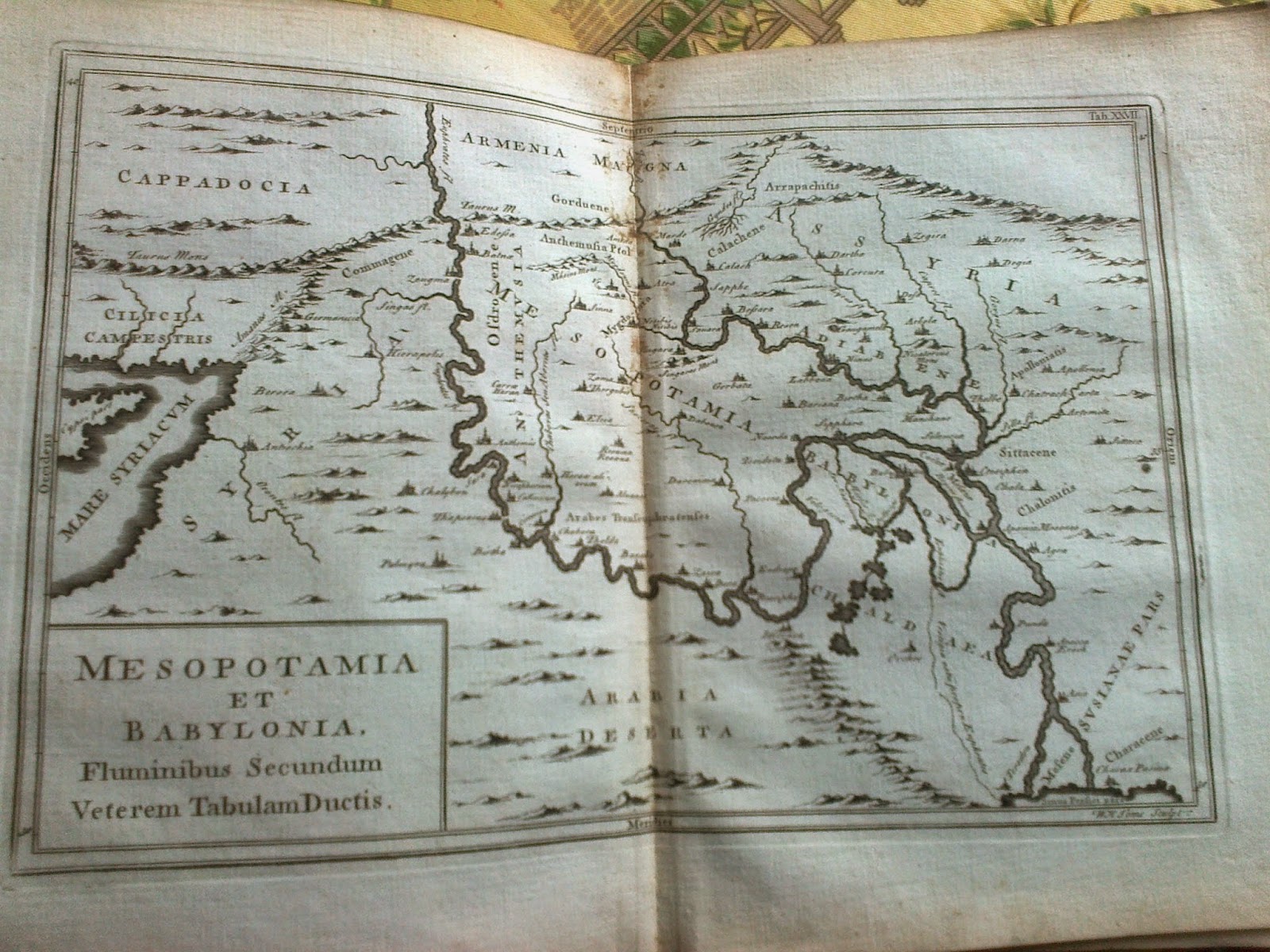 I wanted to look for griffins, though (or gryphons, griffons, spell as you please), and in a way I found them. In Book Two of Paradise Lost, Milton describes how Satan launches himself out on his 'Sail-broad Vannes'  into the abyss of Chaos:


As when a Gryfon through the Wilderness
With winged course ore Hill or moarie Dale,
Pursues the Arimaspian, who by stelth
Had from his wakeful custody purloin’d
The guarded Gold...

All right: who were the Arimaspians? It turns out they come into the first century 'History of Alexander the Great' by Quintus Curtius Rufus: they were also known as the Euergetae, the Benefactors, whose kindness once saved the army of Cyrus the Great of Persia. Alexander, a fan of Cyrus, respected these people for assisting his hero, and he was also impressed by their laws and customs which the 2nd century historian Arrian reports 'had as good a claim to fairness as the best in Greece.' Nothing, sadly, about stealing gold from griffons. That's left to Herodotus, in Book 4 of his History: 'Aristeas ... son of Caystrobius, a native of Proconnesus, says in the course of his poem that wrapt in Bacchic fury he went as far as the Issedones. Above them dwelt the Arimaspi, men with one eye; still further, the gold-guarding griffins; and beyond these, the Hyperboreans, who extended to the sea.'

Wow. They have only one eye and still succeed in stealing gold from griffins? But here they are, if you can make out the name: the ARIASPAE [sic] and Euergetae, halfway down the map on the left-hand side. By that way, that graceful curve of mountains just below the legend at the top is named as the Parapamisus Mons and Imaus Mons. That's the Hindu Kush. 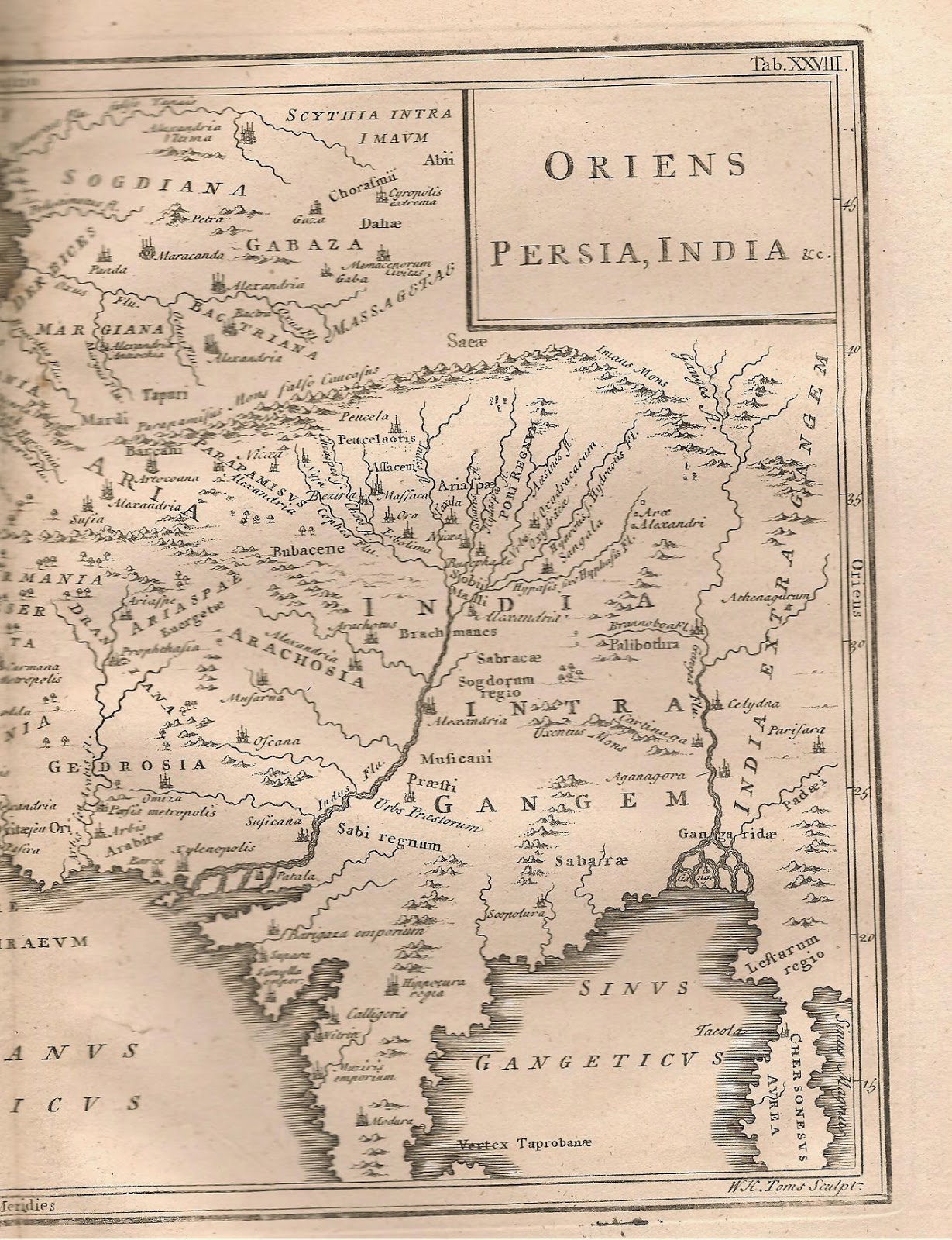 I went hunting for more. Here, at the top of the map of Scythia and Serica (peppered with cities called Alexandria) on the very verge of 'Terra Incognita' - thrilling to see - are the Anthropophagi, Eaters of Men, while below them, fittingly a little less distant, a little less uncivilised, we encounter the Hippophagi, eaters of horseflesh. 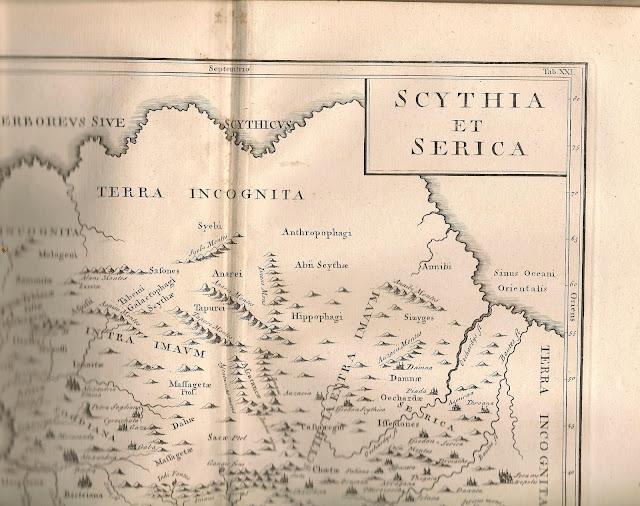 Lots of almost ruler-straight lines of mountains are scattered across the map. We really do seem to be somewhere in Middle-earth! 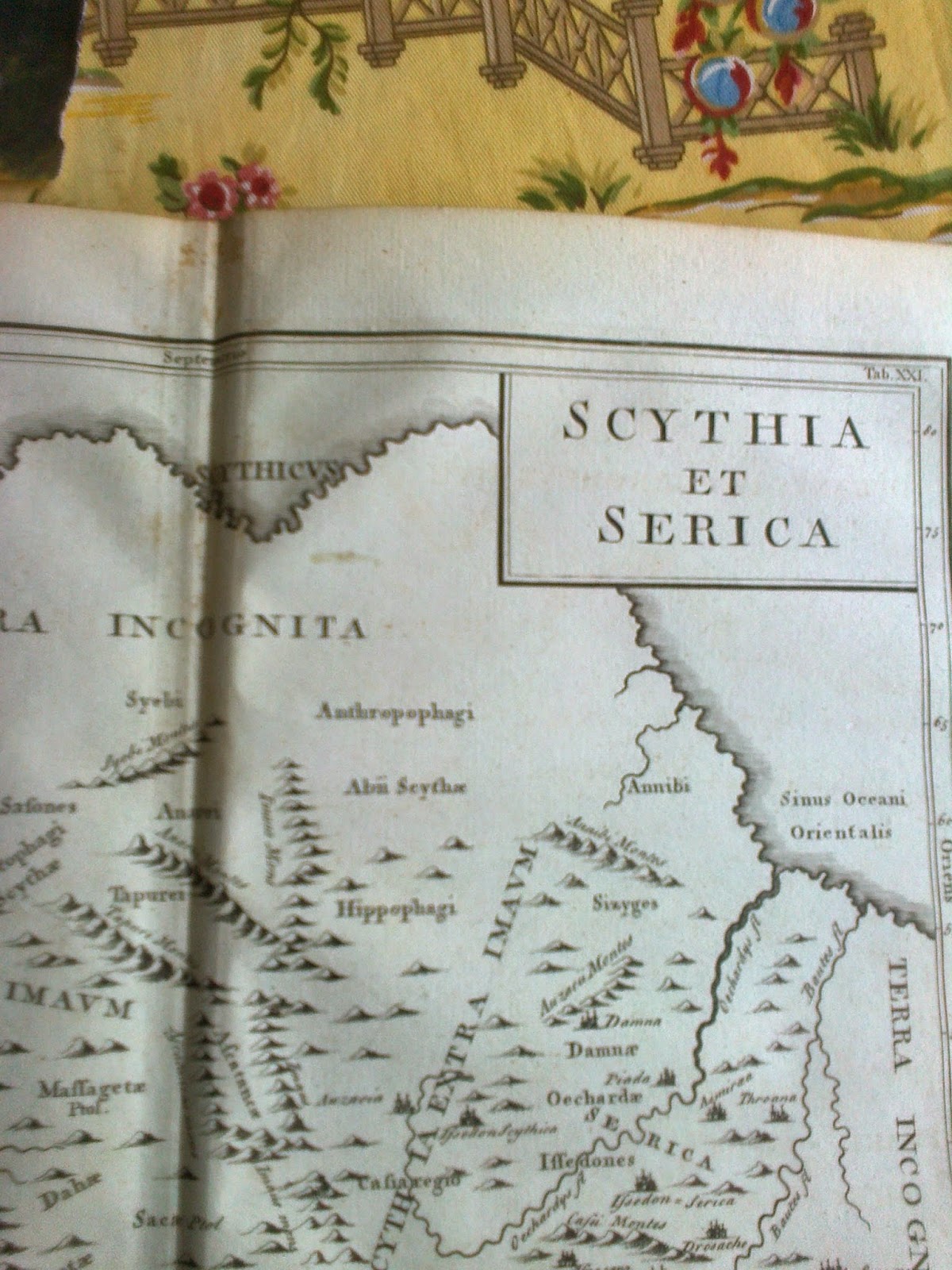 Pliny the Elder describes how the Anthropophagi, 'whom we have previously mentioned as dwelling ten days' journey beyond the Borysthenes, according to the account of Isigonus of Nicæa were in the habit of drinking out of human skulls, and placing the scalps, with the hair attached, upon their breasts, like so many napkins."

It doesn't sound utterly impossible, but I feel that Pliny's next source, Ammianus Marcellinus, may have been embroidering at little when he adds: "And these men are so avoided on account of their horrid food, that all the tribes which were their neighbours have removed to a distance from them. And in this way the whole of that region to the north-east, till you come to the Chinese, is uninhabited."  Although that's the China Sea, there, at the eastern edge of the map...

I've always had a soft spot for the Anthropophagi since first meeting them in T.H. White's The Sword in the Stone:  Robin Hood explains:


‘Now, men... Tonight the Anthropophagi are holding one of their feasts of sacrifice and it behoves us to slay them at it. You know how many varieties they have.  The Scythians, who wrap themselves in their ears, can hear a twig break half a mile away. The Pitanese, who live by smell, can detect a man upwind for three miles. The Nisites, with three or four eyes, can distinguish the faintest movement anywhere. All these men, or beast if you prefer to call them so, are ... armed with poison arrows.  Our chances are small.’

Sir John Mandeville knew of creatures like these, living in the Island of Dodyn - not to be found anywhere in my maps, alas - and he had more to say on griffins, this time from Bactria, north of the Arimaspians:

'In that land are trees that bear wool, as it were sheep, of which they make cloth. In this land are ypotains that dwell sometimes on land, sometimes on water, and are half a man and half a horse, and they eat naught but men, when they may get them. In this land are many gryffons, more than in other places, and some say they have the body before as of an Egle,  and behind as a Lyon, and it is trouth, for they be made so, but the Griffen hath a body greater than viii Lyons and ... worthier than a hundred Egles. For certainly he will bear to his nest flying, a horse and a man upon his back... for he hath long nayles on his fete, as great as it were hornes of Oxen,  and of those they make cups there to drink of, and of his rybes they make bowes to shoot with.'

Ypotains are hippos, I suppose? And the wool growing on trees, might that be cotton, or even silkworm cocoons?  Since things so strange turn out really to exist, then why on earth not griffins?


Marco Polo too had something to say about griffins, which he located - possibly - on the island of Madagascar. In this wonderful early 15th century illustration, we see a number of gentlemen looking on with calm disapproval as a griffin gobbles up a sheep or goat in the background. I love the little white pygmy elephants - which appear to live in burrows? Marco Polo writes:

''Tis said that in those other Islands to the south, which the ships are unable to visit because this strong current prevents their return, is found the bird Gryphon, which appears there at certain seasons. The description given of it is however entirely different from what our stories and pictures make it. For persons who had been there and had seen it told Messer Marco Polo that it was for all the world like an eagle, but one indeed of enormous size; so big in fact that its wings covered an extent of 30 paces, and its quills were 12 paces long, and thick in proportion. And it is so strong that it will seize an elephant in its talons and carry him high into the air, and drop him so that he is smashed to pieces; having so killed him the bird gryphon swoops down on him and eats him at leisure. The people of those isles call the bird Ruc, and it has no other name. So I wot not if this be the real gryphon, or if there be another manner of bird as great. But this I can tell you for certain, that they are not half lion and half bird as our stories do relate; but enormous as they be they are fashioned just like an eagle.'


Such fun for the eighteenth century Gentleman to muse on all this as he sat in his library, drinking his port. 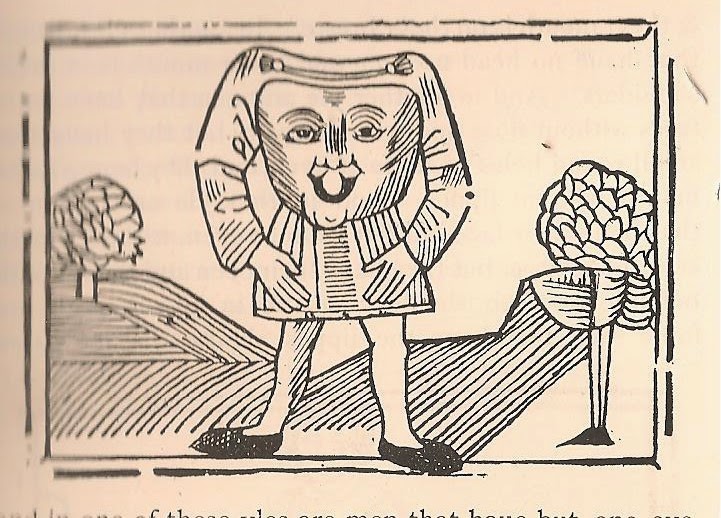 Posted by Katherine Langrish at 01:44