The Terror of Trees 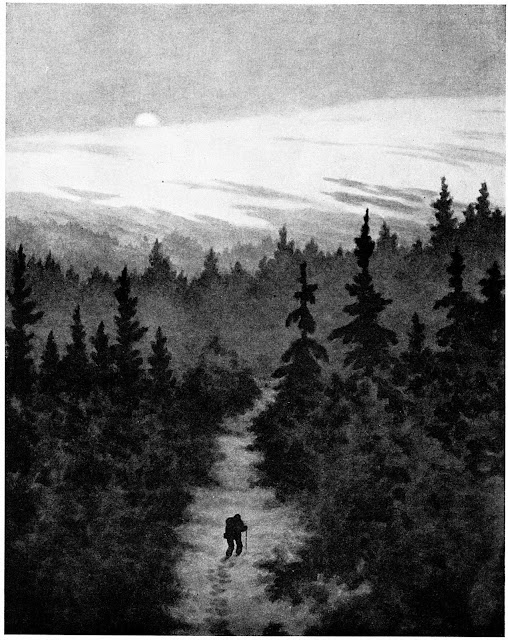 Ellum he do grieve,
Oak he do hate,
Willow do walk
If you travels late.

This old Somerset rhyme is quoted by KM Briggs in ‘The Fairies in Tradition and Literature’: she explains it thus: ‘The belief behind this is that if one elm tree is cut down the one next to it will die of grief: but if oaks were cut they will revenge themselves if they can. Willow is the worst of all, for he walks behind benighted travellers, muttering.’ I somehow imagine Tolkien knew a lot of tree-lore...

Elm used to be the wood coffins were made from, and elm trees had – before Dutch elm disease cleared them from England – a nasty reputation for dropping branches without warning. When I was a child two enormous elms grew on either side of the gate at the bottom of our field and for reasons I’ll explain later I was afraid of approaching them after dark. 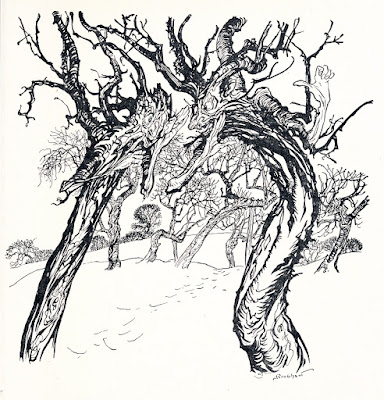 Trees are beautiful, but can also be frightening and even dangerous. Trees, we know, are alive. When you cut them, they bleed. Maybe it hurts them? Then they may resent it. They have voices too, whispering secrets or roaring in anger.  In ‘The Lore of the Forest’ Alexander Porteous writes, ‘In some districts of Austria forest trees are said to have souls, and to feel injuries done to them.’ In gales, trees become truly dangerous and frightening. Algernon Blackwood expresses this terror well near the end of a story, ‘The Man Whom The Trees Loved’:

The trees were shouting in the dark. There were sounds, too, like the flapping of great sails, a thousand at a time, and sometimes reports that resembled more than anything the distant booming of enormous drums. The trees stood up – the whole beleaguering host of them stood up – and with the uproar of their million branches drummed the thundering message out into the night. It seemed as if they had all broken loose. Their roots swept trembling over field and hedge and roof. They tossed their bushy heads beneath the clouds with a wild, delighted shuffling of great boughs. With trunks upright they raced leaping through the sky.

It behoves feeble humans to treat such creatures with care.

Elders are not tall or imposing trees – they are more like tall bushes – but they bleed so freely when cut, they are considered magical. Sometimes they themselves are witches. Christina Hole in ‘Haunted England’ gives a polite formula with which to address an elder before you attempt to cut it: “Old Gal, give me of thy wood, and I will give thee some of mine, when I grow into a tree.” In other tales, elders protect against witchcraft. (Perhaps on the principle, set a thief to catch a thief?) 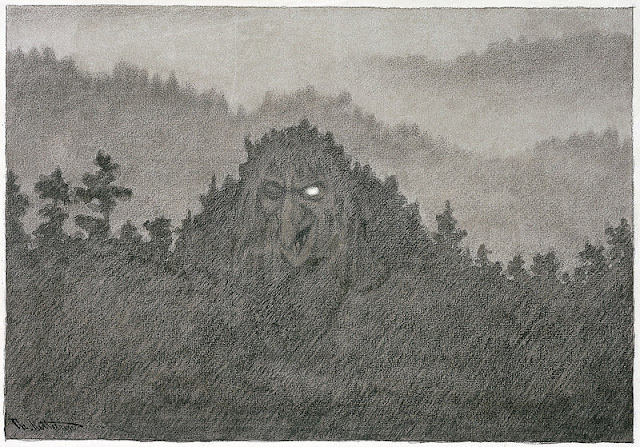 Ash trees too could have a bad reputation. This may possibly be something to do with medieval demonising of the old Nordic mythology in which the Ash is Yggdrasil, the World Tree. In George Macdonald’s adult fairy novel ‘Phantastes’, the hero Anodos is warned by his hostess and her daughter to avoid the evil Ash, whose shadow threatens the fairy cottage in which he is sheltering.

‘Look there!’ she cried,‘look at his fingers!’ The setting sun was shining through a cleft in the clouds piled up in the west; and a shadow, as of a large distorted hand, with thick knobs and humps on the fingers … passed slowly over the little blind.

‘He is almost awake, mother; and greedier than usual tonight.’

‘Hush, child! You need not make him more angry with us than he is; for you do not know how soon something may happen to oblige us to be in the forest after nightfall.’

In Alison Uttley’s fictionalised autobiography, ‘A Country Child’ she describes how an ash tree tried to kill her. There was a swing fixed in it, where the child ‘Susan’ sat, swaying to and fro and looking out at the countryside.

Then Susan heard a tiny sound, so small that only ears tuned to the minute ripple of grass and leaf could hear it. It was like the tearing of a piece of the most delicate fairy calico, far away… An absurd, unreasoning terror seized her. The Things from the wood were free. She sat swinging, softly swinging, but listening, holding her breath, always pretending she did not care. Her heart’s beating was much louder than the midget rip,rip, rip, which wickedly came from nowhere... A voice throbbed in her head, ‘Go away, go away, go away,’ but still she sat on the seat, afraid of being afraid.

Then aloud, to show Them she was not frightened, she sighed and said, ‘I am so tired of swinging, I think I will go,’ and she slid trembling off the seat and walked swiftly away…
Immediately the rip grew to a thunder like a giant hand tearing a sheet in the sky, and the whole enormous bough fell with a crash which sent echoes round the hills. The oaken seat of the swing was broken to fragments, and the great chains bent and crushed. 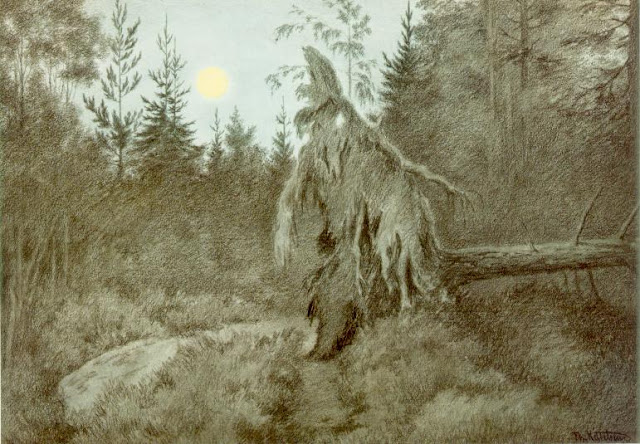 Even on a still, hot day a forest can be an awe-inspiring place, and those who walk or work within it may not be entirely comfortable. In the deep north-east woods of Canada, sometimes you may hear the sound of an axe chopping, in a distant glade where no one should be, and wonder…  This may be Al-wus-ki-ni-kess, the unseen woodcutter of the Passamaquoddies. Or in winter, the terrible jenu of the Mi’kmaq may come running through the frozen forest: a human driven mad by famine who has turned into a cannibal monster with a heart of ice.

What about those elm trees in my childhood home? Why did they scare me? Well, I was thirteen and I’d been reading Robert Louis Stevenson’s book of his travels in Polynesia, ‘In the South Seas’. Here I found a passage which raised the hairs on my head. It’s the experience of a young man called Rua-a-mariterangi, on the island of Katui, who was on the forest margin of the beach looking for pandanus (a fruit which looks a bit like a pineapple).

The day was still, and Rua was surprised to hear a crashing sound among the thickets, and then the fall of a considerable tree.

Thinking it must be someone felling a tree to build a canoe, Rua went deeper into the wood to have a chat with this presumed neighbour, when:

The crashing sounded more at hand, and then he was aware of something drawing swiftly near among the tree-tops. It swung by its heels downward, like an ape, so that its hands were free for murder; it depended safely by the slightest twigs; the speed of its coming was incredible, and soon Rua recognised it for a corpse, horrible with age, its bowels hanging as it came. Prayer was the weapon of Christian in the Valley of the Shadow, and it is to prayer that Rua-a-mariterangi attributes his escape. This demon was plainly from the grave; yet you will observe he was abroad by day. … I could never find another who had seen this ghost, diurnal and arboreal in its habits; but others have heard the fall of the tree, which seems the signal of its coming. Mr Donat was once pearling on the uninhabited island of Haraiki. It was a day without a breath of wind… when, in a moment, out of the stillness, came the sound of the fall of a great tree. Donat would have passed on to find the cause. ‘No,’ cried his companion, ‘that was no tree. It was something NOT RIGHT. Let us go back to camp.’ Next Sunday … all that part of the isle was thoroughly examined, and sure enough no tree had fallen.

This was quite enough for me. Every time I had any reason to walk down after dusk, or at night, towards those two towering elm trees, and pass under the sighing, billowing darkness of their foliage, a creepiness stole down my spine and I could imagine all too clearly a decomposing corpse, swinging down out of the leaves to shove its upside-down face into mine.

Oh yes. Trees can be terrifying. Have you any stories to tell? 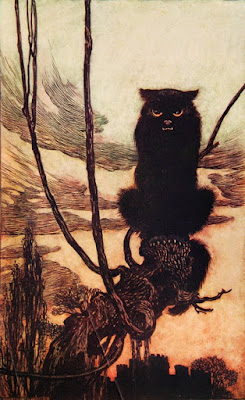 Theodore Kittelsen: 'Into the Woods'

Arthur Rackham: Trees: from 'A Dish of Apples' by Eden Philpotts

Posted by Katherine Langrish at 01:14