Folklore Snippets: The Tailor and the Corpse 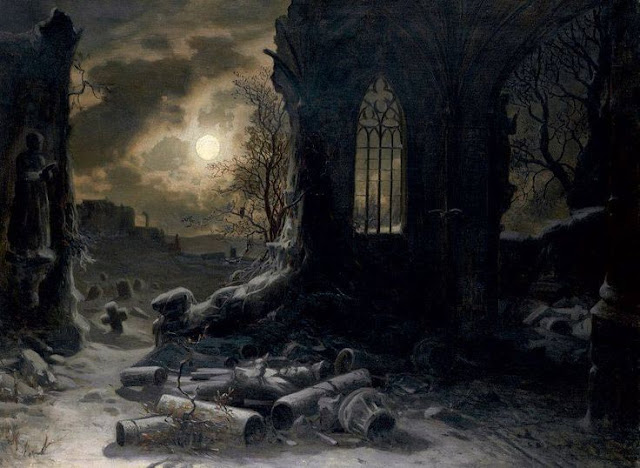 I love this story partly because it's such a good one to tell aloud - and also because the hero is one of those impudently brave tailors who turn up so often in fairy tales and folk tales. I think tales about tailors must have been so popular because the little, crooked-legged, short-sighted tailor was, like Mr Bilbo Baggins, such an incongruous hero: a little, ordinary chap who could best giants, bulls, boars and unicorns - and in this tale, a terrible revenant of the Norse type - a draug or animated corpse.


From: Highland Fairy Legends, collected from oral tradition by the Rev James MacDougall (1910)

A tailor once, living on the farm of Fincharn, near the south end of Loch Awe, having denied the existence of ghosts, was challenged by his neighbours to prove his sincerity by going at the dead hour of midnight to the burying place at Kilnure and bringing back with him the skull lying in the window of the old church that gives its name to the place. The tailor replied that he would give them a stronger proof even than that, by sewing a pair of trousers in the church between bed-time and cock-crow that very night.

They took him at his word and, as soon as ten o’clock came, the tailor entered the old church, seated himself on a flat grave-stone resting on four pillars, and, after placing a lighted candle beside him, he began his tedious task. The first hour passed quietly enough while he was sewing away and keeping up his heart singing and whistling the cheeriest airs he could think of. Twelve o’clock also passed, and yet he neither saw nor heard anything to alarm him in the least.

But sometime after twelve he heard a noise coming from a gravestone which was between him and the door, and on casting a side-look in that direction he thought he saw the earth heave under it. The sight at first made him wonder, but he soon came to the conclusion that it was caused by the unsteady light of the candle in the dark. So, with a hitch and a shrug, he returned to his work and sewed and sang as cheerily as ever.

Soon after this a hollow voice, coming from under the same stone, said: “See the great, mouldy hand, and it so hungry looking, tailor.” But the tailor replied: “I see that, and I will sew this,” and he sang and sewed away as before.

After another while the same great hollow voice said, in a louder tone: “See the great, mouldy skull, and it so hungry looking, tailor.” But the tailor again answered, “I see that, and I will sew this,” and he sewed faster and sang louder than ever.

A third time the voice spoke, and said in a louder and more unearthly tone: “See the great, mouldy shoulder, and it so hungry looking, tailor.”  But the tailor replied as usual, “I see that, and I will sew this,” and he plied the needle quicker and lengthened his stitches.

This went on for some time, the dead man showing next his haunch and finally his foot. Then he said in a fearful voice: “See the great, mouldy foot, and it so hungry looking, tailor.” Once more the tailor bravely answered: “I see that, and I will sew this.” But he knew that the time for him to fly had come. So, with two or three long stitches and a hard knot at the end, he finished his task, blew out the candle, and ran out at the door, the dead man following him and striking a blow aimed at him against one of the jambs, which long bore the impression of a hand and fingers.

Fortunately the cocks of Fincharn now began to crow, the dead man returned to his grave, and the tailor went home triumphant.