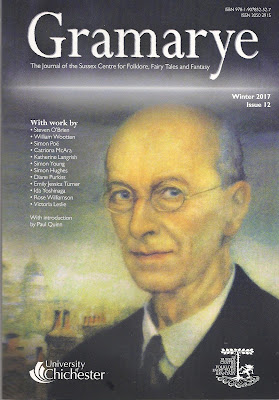 I am delighted to be in the new issue of GRAMARYE, the journal of the Sussex Folklore Centre and as usual an unmissable read for folk lore and fairy tale enthusiasts.This issue contains three marvellous articles on Arthur Rackham - whose self portrait adorns the cover.  In 'A Walk Through Rackham Land,' Steven O'Brien takes us on a ramble through the deep history of the artist's beloved Sussex countryside.  William Wootten tells how Rackham's silhouettes inspired his own verse narrative of The Sleeping Beauty, and Simon Poë interestingly compares Rackham's illustrations to 'Puck of Pook's Hill' with those of H.R. Millar. Catriona McAra contributes an article on fairy references in the work of the  surrealist Leonora Carrington, while in 'Herne, the Windsor Bogey', Simon Young takes us into Windsor Great Park on a search for the controversial history of the great oak-tree of Herne the Hunter. 'The Signing Wife' is an original translation by Simon Hughes of a thought-provoking Norwegian folktale collected by Peter Christen Asbjørnsen. Finally, Diane Purkiss adds a touching and lyrical account of her childhood love for Andersen's story 'The Snow Queen'.

My own contribution is an analysis of the Grimms' fairytale  'MAID MALEEN': 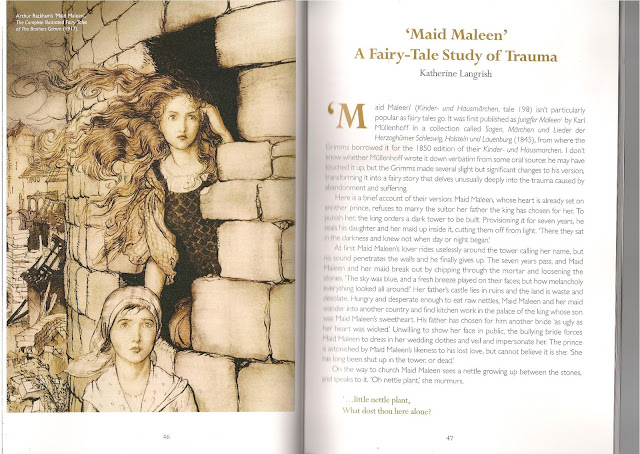 
Maid Maleen (Kinder- und Hausmärchen, tale 198) isn’t particularly popular as fairy tales go. It was first published as Jungfer Maleen by Karl Müllenhoff in a collection called Sagen, Märchen und Lieder der Herzoghümer Schleswig, Holstein und Lauenburg (1845), from whence the Grimms borrowed it for the 1850 edition of their Kinder- und Hausmarchen. I don’t know whether Müllenhoff wrote it down verbatim from some oral source: he may have touched it up, but the Grimms made several slight but significant changes to his version, transforming it into a fairy story that delves unusually deeply into the trauma caused by abandonment and suffering.  ...

Why do I love this story so much?  Isn’t it just another tale of a passive princess sitting in a tower? In fact there aren’t so very many stories of princesses shut up in towers, and those that do exist are less like the stereotype than you might suppose. As Maid Maleen does, heroines quite often rescue themselves. Even in the case of Rapunzel (KHM 12) the prince not only fails to rescue Rapunzel, but wanders blind in the desert until he is saved by her. In Old Rinkrank (KHM 196), a princess trapped in a glass mountain ultimately tricks her captor, and engineers her own escape. [...] These tales are listed in the Aarne-Thompson folk-tale index as tale type 870: The Entombed Princess or The Princess Confined in the Mound – though this description, as Torborg Lundell has pointed out, is hardly adequate. Instancing The Finn King’s Daughter, another tale in which an imprisoned heroine digs herself out from underground and rescues her lover from the false bride, Lundell writes:

Consistent with the Aarne and Thompson downplay of female activity, this folktale type, with its aggressive and capable female protagonist, has been labelled ‘The princess confined in the mound’ (type 870), which implies a passivity hardly representative of the thrust of the tale. ‘The princess escaping from the mound’ would fit better...


GRAMARYE issue 12 can be ordered for £5.00 from the Sussex Centre for Folklore, Fairy Tales and Fantasy by following this link:  http://www.sussexfolktalecentre.org/journal/

Posted by Katherine Langrish at 04:21