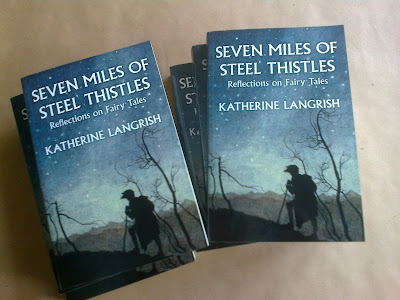 Good reviews are always lovely to receive, but sometimes you receive one which means more than most. This, from the almost legendary Jacqueline Simpson, sometime President of the Folklore Society, Visiting Professor of Folklore at the Sussex Centre of Folklore, Fairy Tales and Fantasy at the University of Chichester, collaborator with Terry Pratchett on The Folklore of Discworld and co-author with Jennifer Westwood of The Lore of the Land: a Guide to England's Legends, from Spring-heeled Jack to the Witches of Warboys - is truly special. So here it is, from the latest issue of 'Folklore' and please forgive me for a little trumpet-blowing.

‘Fairy tales’, writes Katherine Langrish, ‘are emotional amplifiers . . . [They] work as music does,directly on our feelings’ (197). This collection of her essays (plus three poems) illustrates the psychological subtlety and poetic force of her own responses, and will surely guide readers towards similar sensitivity. She can also, on occasion, cast light on relationships of sources and analogues, notably in her discussion of the ballad of ‘The Great Selkie of Sule Skerry’ (158–87), but her main concern is usually with the deeper themes which she perceives as underlying fairy-tale plots—such themes as time, hunger, death, and rebirth. Alongside these, she can provide sudden sharp insights and speculations which even if unprovable will remain memorable and interesting. For example, in an essay on water spirits she wonders whether the fact that a stick plunged into water will appear broken although it is in fact unharmed could have inspired the prehistoric custom of bending or breaking weapons before throwing them into sacred pools (262). She boldly tackles even the apparently distasteful tale of ‘The Juniper Tree’, which ‘acknowledges terrible evil but ends in hope’ and which ‘haunts’ her (145). Of course, one’s own responses may not always match hers; for example, she has never met anyone who likes the tale of ‘Bluebeard’ (198),whereas I enjoyed it as a child—largely, as I recall, for Sister Anne’s recurrent rhyming reply, ‘Je voie l’herbe qui verdoit et la route qui poudroit’ (I see green grass growing, and on the road dust blowing). We are all subjective readers, and I am grateful to Katherine Langrish for showing how fruitful this can be.

Her writing throughout is elegant, vivid, and frequently witty; there is much pleasure, as well
as much information, to be obtained from Seven Miles of Steel Thistles.


Posted by Katherine Langrish at 12:45