A post from the archives: Alan Garner's lecture, "Powsells and Thrums", February 2015

The lecture ‘Powsells and Thrums’, delivered by Alan Garner at Jodrell Bank on Wednesday night, was the first of a series designed to consider the nature of creativity and its importance to what Garner maintains is an arts/science spectrum – not two cultures, as CP Snow suggested, but a continuity. Powsells and thrums, he explained, are old words for the oddments of thread and scraps of cloth left over from weaving and kept for personal use: metaphors for the scraps of story and oddments of meaning which can be woven and pieced together to create something new.  Which is exactly what he did in his lecture.


I’m not going to try and deliver a comprehensive report of the evening.  Alan Garner spoke with wit, humour and quiet eloquence for a full hour, and I hope and trust the lecture will eventually appear in print. With many omissions, these are merely some of my impressions and memories of it – powsells and thrums, snippets and fragments which you can turn about and reshape for yourselves.


He began with a story from the introduction to Dylan Thomas’s Collected Poems. Thomas tells the story of a shepherd who, asked why he made, from within fairy rings, ritual observances to the moon to protect his flocks, replied: ‘I’d be a damned fool if I didn’t!’ Thomas adds, ‘These poems are written for the love of man and in praise of God, and I’d be a damned fool if they weren’t.’


How does a story come into being?  In 1956, ‘rummaging in a dustbin’, Garner saved a fragment of newspaper containing the story of two lovers who quarrelled. The boy threw a tape at the girl and stormed off. A week later he killed himself. Then she listened to the tape: it was an apology but also a threat: if she hadn't cared enough to listen to it within a week, he would conclude she didn’t love him… Nine years later, Garner heard a local story – dislocated from history – of Spanish slaves being marched north to build ‘a wall’, who ran away and found refuge on Mow Cop. Could this be a folk memory of the vanished Spanish Legion, the Ninth Hispana? Then there was the chilling history of the Civil War massacre at Barthomley Church, and finally in 1966 some graffiti at Alderley Edge station: two lovers' names and beneath them, written in silver lipstick: ‘Not really now, not any more.'  Powsells and thrums: ‘Why should those words bring together all the other items? They come looking for us, or that’s the feeling.’  And so: ‘Red Shift’.

It’s not mysterious, Garner insisted. Creativity, he said, requires intelligence, which is linear and deals with the here and now – but also intuition, which is not under conscious control. Creativity is not polite: ‘It comes barging in and leaves the intellect to clean up the mess.’ Creativity, he said, is risk, and ‘without risk we can only stay as we are.’ What he proposed to give us would therefore be a collection of oddments, powsells and thrums: ‘stories rather than lecture, but woven to an end.’

‘Art interprets the inexplicable.’ The age of the universe is thirteen and a half thousand million years. How do we understand such numbers?  The intellect cannot help. We must turn to stories, such as this: Far, far away there is a diamond mountain, two miles high, two miles wide and two miles deep. Every hundred years a little bird comes and sharpens its beak on the top of it, with two little strokes: whet, whet! and flies away.  When by this process the entire mountain has been worn away to the size of a grain of sand – then, the first second of eternity will be at an end.

In 1957 Alan sat in his ancient farmhouse, Toad Hall, looking across the fields at Jodrell Bank’s recently completed Lovell Telescope and turning a ‘black pebble’ in his hand – a 500,000 year-old stone axe. ‘The telescope was moving – alert. It was watching a quasar… I needed to know the telescope.’  He went to see Bernard Lovell, taking with him another axe, three and a half thousand years old, beautifully polished and shaped with a hole bored through it for the haft. (Where did he find these axes? I should love to know.) With the words ‘I have something to show you,’ he dropped the axe on Lovell’s desk. ‘This is the telescope.’

Sir Bernard gave him a pass, understanding what he meant.

The axe is the forerunner of the telescope.

On their own, science and art hold piecemeal truths. The Garner lectures are designed to ‘repudiate the schism’ between CP Snow’s two cultures. They are part, said Garner, of what he and his wife have called ‘Operation Melting Snow.’ And, he said, ‘Sir Bernard was ahead of me. Risk taker, cosmologist, churchgoer, parish organist,’ Lovell was so distressed when the telescope was used for military purposes that he considered becoming a priest – but was dissuaded by a bishop who told him he’d be more use where he was because ‘creativity is prayer.’  And prayer, Garner said, is ‘a dialogue with the numinous. And we must give it form.’ 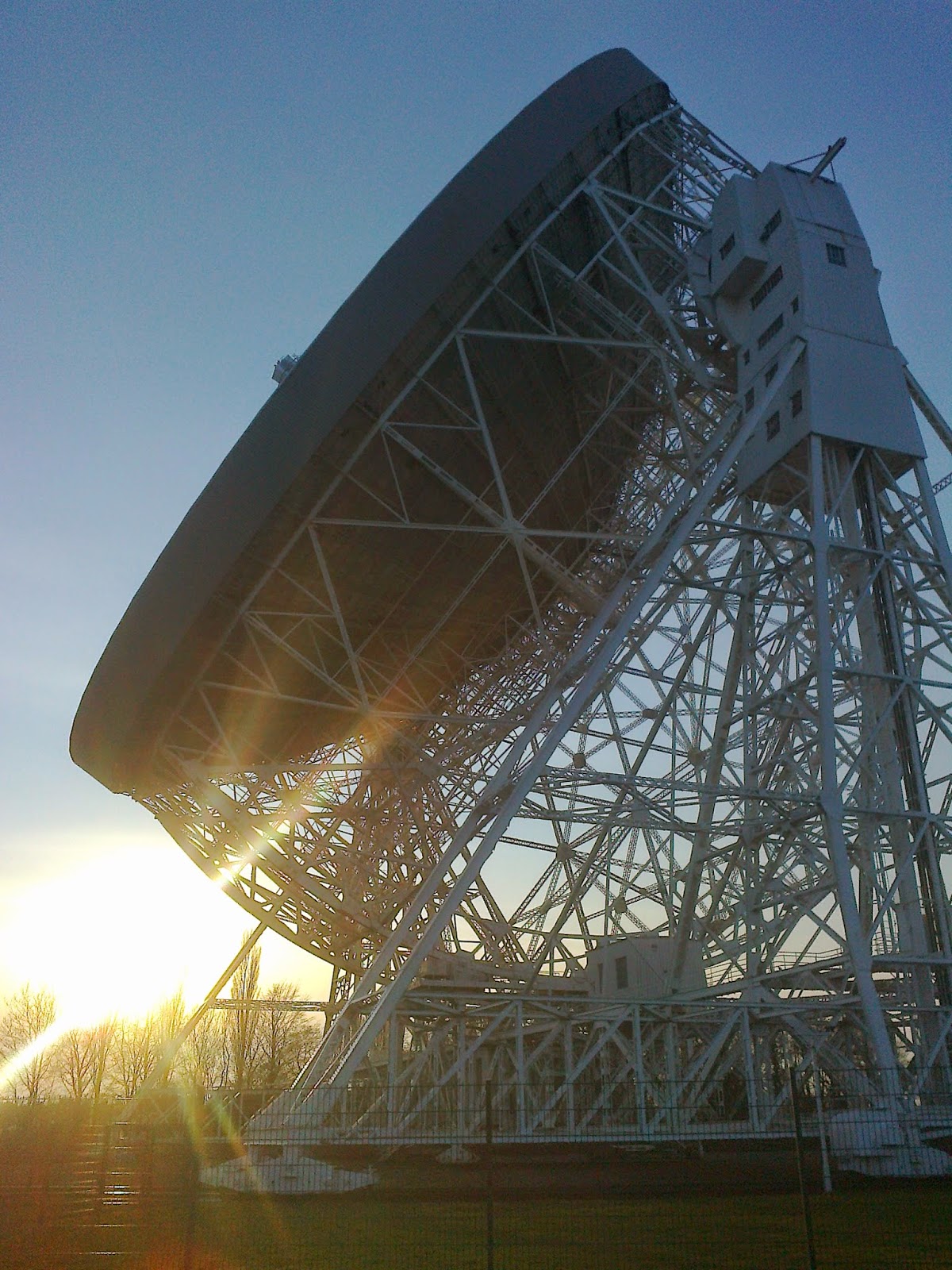 It is impossible to look at the Lovell telescope as it in its turn looks into the deep past, and not feel a shudder of the numinous.

Science and art, the warp and the weft: both are needed to weave the fabric of human understanding.

Garner suggested we all instinctively know what is meant by a good place: a place of refuge from which we can look out in safety. His home, Toad Hall, is a ‘good place’, which is perhaps why the spot has been continuously occupied for 10,000 years. Lucky are those who have roots in such places. But also there are ‘bad places’: the valley of Glen Coe for instance, a certain church, a house in Cambridge which he enters only with reluctance.  ‘And I defy you to be at ease in a multi-storey carpark.’

‘A businessman from an ancient culture said of California, “Even the light is a Hockney painting.” The land is our life force. Artists magnify the land.’ Wordsworth and Hardy interpreted and magnified the landscapes of the Lake District and Wessex with their intensity of vision. ‘Art makes people feel.’

Human beings need both refuge and prospect. We may have become human on the Pleistocene savannahs, standing up on two legs to find food and to spot danger. We recreate our places of refuge and prospect even in suburban homes and lawns. From our places of refuge we interpret the world with stories: from them we look outward, questioning, questing, looking towards ‘a different sort of pebble, waiting to be chipped.’

Vishnu sat on a mountain top weeping. Hanuman came by. ‘What are you crying for, and what are those little ants of people down there, rushing about?’ ‘I have dropped the jewel of wisdom, and it has shattered. Everyone down there has grabbed a splinter, and each of them thinks they have the whole.’

And so at last the evening comes to an end. ‘I sit in the house in the wood, and watch the telescope and tell the stories...’ Alan Garner takes a breath. ‘I’d be a damned fool if I didn’t!’ 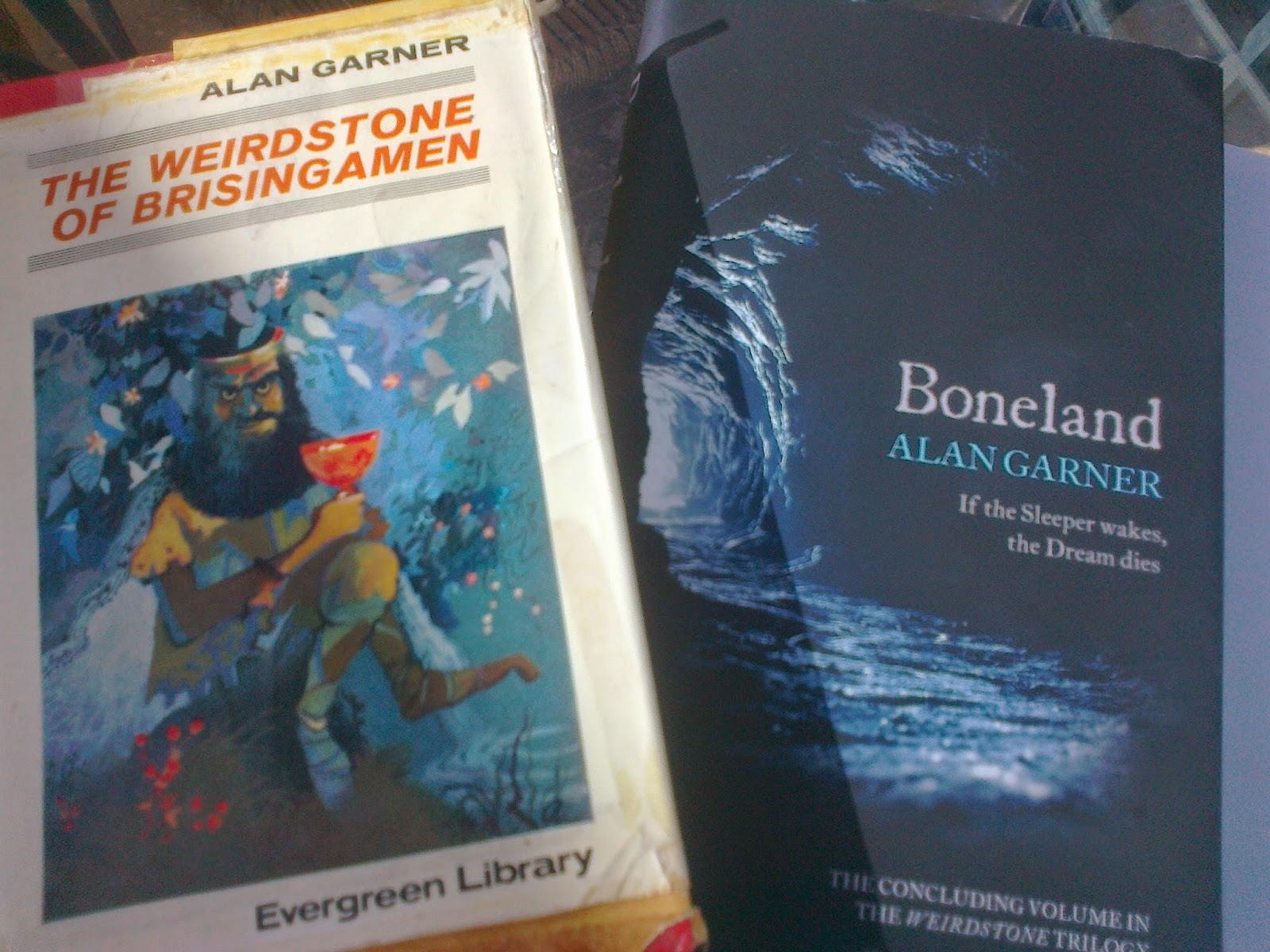 Click here for a link to the Jodrell Bank website and a previously unpublished poem by Alan Garner: 'House by Jodrell'.
Posted by Katherine Langrish at 02:43