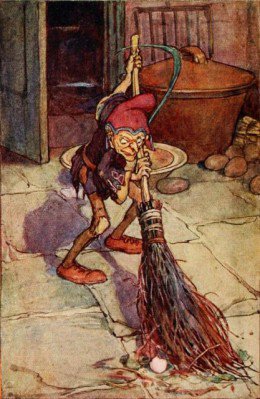 Talking with a group of Girl Guides a while ago, we fell (as you do) into a discussion about house spirits. The best known example, annoyingly enough, is Dobby the house-elf from J.K. Rowling’s Harry Potter series. I have a soft spot for house spirits, and for me Dobby isn’t the best ambassador for the breed. Rowling takes a freehand approach to creatures from folklore: she happily reinvents the creatures. Her Boggart, for example, resembles not so much the boggarts of folklore, but a nursery bogeyman. ‘Boggarts’, declares Professor Lupin in ‘The Prisoner of Azkaban’, ‘like dark, enclosed spaces.  Wardrobes, the gap beneath beds, the cupboards under sinks. …So, the first question we must ask ourselves is, what is a Boggart?’  Of course Hermione comes up with the answer:

"It’s a shape-shifter,” she said. “It can take the shape of whatever it thinks will frighten us most.’

This certainly isn’t what a boggart from folk-lore does, although they are able to take the shape of animals such as black dogs. More about boggarts below. But to return to Dobby, the down-trodden house-elf of the Malfoy family. Dobby is a slave. He lives in terror, forced to punish himself whenever he criticizes his master. It’s a great twist of reinvention, but hardly representative of house spirits in general. From English brownies, boggarts, lobs and hobs, to the Welsh bwbach, from Scandinavian nisses and tomtes and German kobolds, to the Russian domovoi, most house spirits are independent, mischievous, strong-minded characters. And although Rowling employs the folklore motif best known from the Grimms’ fairy tale ‘The Elves and the Shoemaker’ that a gift of clothes will set the creature free (Dobby has to wear a pillowcase instead of clothes), many folk-tales make it clear that far from longing for this gift, many house spirits are perversely and deeply offended by it. 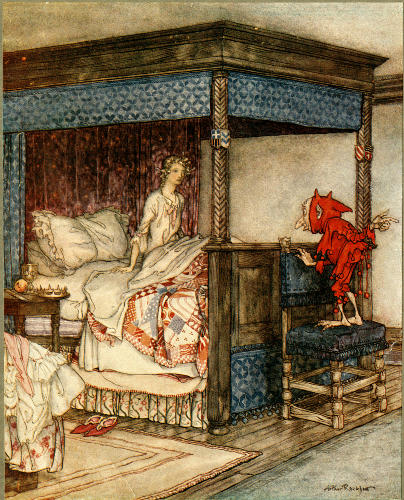 Briggs, of course, wrote her own story about a hobgoblin. ‘Hobberdy Dick’ (1955), set in 17th century Oxfordshire, is one of the most delightful of children’s books, full of folk-lore magic plus a few moments of cold terror as well. Here, Hobberdy Dick scampers up to the Rollright Stones on May Eve, to greet his friends: 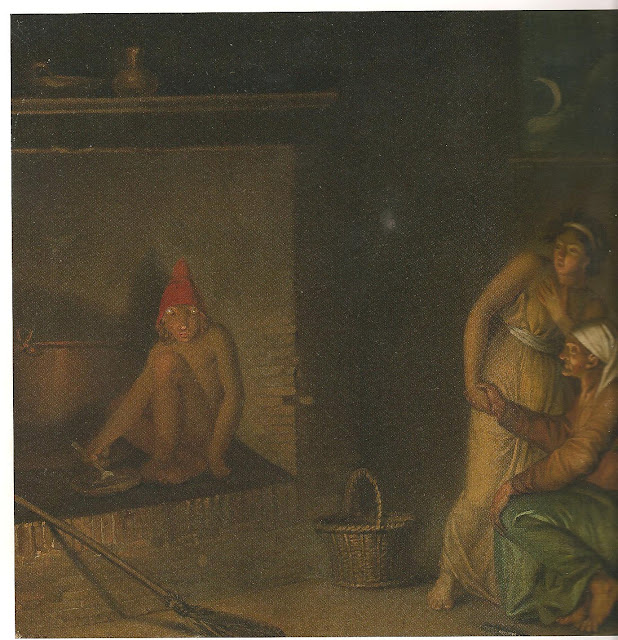 The Scandinavian Nisses are my personal favourites among house spirits. The painting above is by the 18th century Danish painter Nicolai Abraham Abildgaard, and I was once contacted by a New York auction house who asked me to confirm that the subject is indeed a Nisse. As you can see, he wears a red cap and is sitting by the fireside with his broom, eating groute, or buckwheat porridge - but the women of the household are clearly startled and uneasy in his presence. Where the painting is now I do not know, but hope the lucky owner will not object to my sharing the image since I lent a hand in identifying the subject. I first met Nisses in Thomas Keightley’s 1828 compendium ‘The Fairy Mythology’, and made use of some of the legends in my own ‘Troll’ books (available, if you will excuse the quick puff, in one volume under the title ‘West of the Moon’.)  I was charmed by their mischief, vanity, naïvety, their occasional bursts of temper and their essential goodwill.

Temperamental, unpredictable, generous, hard-working, sometimes dangerous, the house spirit is reminiscent of the household gods of the Bible, the teraphim which Rachel stole from her father Laban (Genesis 31, 34), and of the Lares and Penates of the Romans.  Better to have your own, humble little household spirit who could be pleased with a dish of cream or a bowl of porridge, folk may well have thought, than try to gain the attention of the greater gods. And so the house spirit became a member of the family, helping and hindering in his own inimitable way. 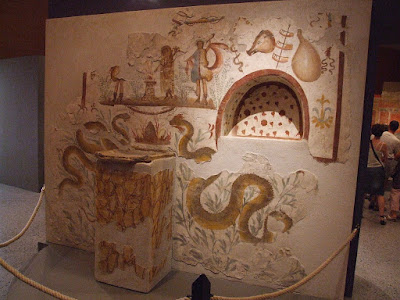