At Ottesund Ferry on Limfjord there was a ferryman whose name was Reimer. He had gone all the way to Copenhagen to get a licence to allow him to ferry over the Sound. It took him a long time to get all the arrangements in place, and it was Christmas Eve by the time he had finished with the Lords of Council.

As he went off along the street, wishing that he was at home and very upset that he wasn’t, he met a little old man in a grey coat who called him by his name and asked, “Wouldn’t you like very much to get home this evening?”

“Of course I would, but it’s impossible!”

“O no,” said the little man, “if in return you will do for me a service I shall shortly have need of – and for which I shall also pay you richly – you shall be home this very evening at suppertime, quite unharmed.”
“All very well,” said Reimer, “but first I should like to know just what sort of a service you want me to do.”

“Only this,” said the little man, “that you and your ferryman, one night, will carry cargoes for me from the south to the north side of the Sound. And for that you now have a licence, and permission.”

“No objection to that,” said Reimer, “but how are we to travel home? What conveyance do you have?”

“We’ll get on my horse together,” said the little man, “you shall sit behind me; the horse is only a little one but I know how to guide it.” The little horse was waiting outside one of the city gates; they both mounted – and then went through the air like a flash of lightning, without meeting anything until two hours after they had begun their journey, when Reimer heard a clink, as if two pieces of iron struck together.  “What was that?” he asked. “O, nothing except that the beast’s hind shoe touched the spire of Viborg Cathedral,” said the little man. Soon after, the horse touched down in Reimer’s own courtyard. He dismounted, and his guide and the horse disappeared in the same moment.

Glad to be home, Reimer soon forgot his promise; but one evening the little man reappeared and reminded him of it. He made haste then to get all his things ready, and his travelling companion came to him as it was growing dark. “Come now, and bring all your men!”

Reimer’s ferryboats came and went all the long night, and many heavy chests and boxes were ferried over, but they saw no people except the one man.  When all the goods had been carried across, the bergman (for so he was) took a basket, opened one of the chests, filled the basket with chinking coin, gave it to Reimer and said, “Take that for your trouble and goodwill towards one that you know not, but don’t thank me for it. I suppose you would like to know what you have ferried over tonight – there! You can see it!” and taking the cap off his own head, he put it on Reimer’s, who at once  saw the whole beach swarming with thousands of little trolls of both sexes. He pulled the cap off his head, quite terrified, and asked the old man, “And where are you going with all this?”

“Because Christianity is pushing further and further up from the south,” said the bergman, “but it will hardly get up to the Ice Sea in my time, so we are going there.” 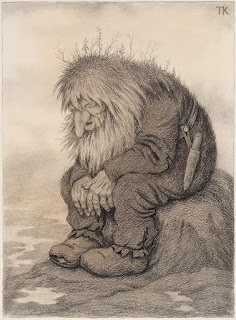 Troll by Theodore Kittelsen
Posted by Katherine Langrish at 09:59