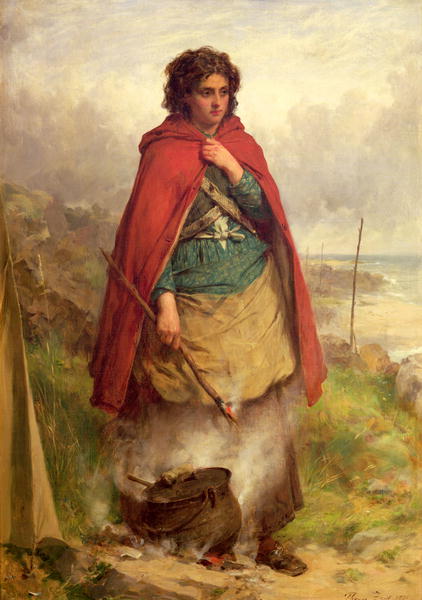 This fascinating story from JF Campbell’s ‘Popular Tales of the West Highlands’ (1860) opens with a mutually beneficial arrangement - perhaps of long standing - between a mortal woman and a ‘woman of peace’ from a nearby brugh or elf-mound. (Flattering circumlocutions were used when speaking of the fair folk. They didn’t like to be named, and you wouldn’t want to offend them.) Every day, the woman of peace visits a herder’s wife to borrow her kettle (a big iron cooking pot), and the herder’s wife lets her take it on condition it is returned in the evening, filled with a portion of meat and bones.

It sounds friendly, but the relationship is uneasy. It works only within a strict, formal framework. This is not like  neighbours lending each other cups of flour and gossiping over the fence, it’s more like an armed truce. Make one mistake, put a foot wrong, and the bargain will be void, with penalties. Each sees the other as problematic and unsafe, each is dumb in the other’s territory. The woman of peace speaks no word to the herder’s wife, who on every visit has to repeat a kind of rhymed spell conjuring the power of the smith who forged the kettle and restating the payment required for its use. In the ‘brugh’ the roles are reversed: it's the herder’s wife who speaks no word there, while the fairy man, the old ‘carle’, employs a counter rhyming spell to challenge her and raise the alarm. “Silent wife,” he addresses her, “that came on us from the land of chase…”  The meaning of ‘the land of chase’ isn't entirely clear to me (something to do with hunting?), but it sounds as if the old man regards the visitation of this mortal woman as something sudden, uncanny and perhaps dangerous.

On one level this is one of those stories where the wife leaves her husband to look after the house or perform some simple domestic task like rocking the cradle, and he makes a terrible mess of it. But most of those tales are comic fantasies designed to show men up as brash fools, helpless without their women. Although this story does that, it isn’t quite like that. It isn’t funny, it’s eerie and slightly sad. The herder’s wife is used to the silent appearance of the woman of peace and she knows the rules by which they operate. Her husband doesn’t. Maybe he listens with half a ear to what his wife tells him to say – he’s sure it will be easy – but when the woman of peace approaches, there’s something so strange about her that even her shadow terrifies him. His fearfulness and inability to speak the correct words and perform the correct ritual, brings this fragile relationship to an end, with loss to both sides.

NB: The hole in the (probably turf) roof would be to let the smoke out, and the lovely expression ‘in the mouth of the night’ means ‘in the evening’.

THE WOMAN OF PEACE

“A smith is able to make
Cold iron hot with coal.
The price of the kettle is bones,
And to bring it back again whole.”

The woman of peace would come back every day with the kettle, and meat and bones in it. One day the housewife was for going over the ferry to Baile a Chaisteil, and she said to her man, “If thou wilt say to the woman of peace as I tell you, I will go to Baile Castle.”

He was spinning a heather rope to be set on the house. He saw a woman coming and a shadow from her feet, and he took fear of her. He shut the door. He stopped work. When she came to the door she did not find the door open, and he did not open it for her. She went above a hole that was in the house. The kettle gave two jumps, and at the third leap it went out at the ridge of the house. The night came, and the kettle came not.

The wife came back over the ferry, and she did not see a bit of the kettle within, and she asked, “Where is the kettle?”

“Well then, I don’t care where it is,” said the man, “I never took such a fright as I took at it. I shut the door and she did not come any more with it.”

“Good-for-nothing wretch, what didst thou do? There are two that will be ill off – thyself and I!”

“She will come tomorrow with it.”

“She will not come.”

She hasted herself and went away. She reached the knoll, and there was no one within. It was after dinner, and they were out in the mouth of the night. She went in, she saw the kettle and she lifted it. It was heavy for her with the remnants they had left in it. Then an old carle that was hidden within saw her going out, and he said,

“Silent wife, silent wife
That came on us from the land of chase,
Thou man on the surface of the brugh,
Loose the black and slip the fierce.”

The two dogs were let loose; and she was not long away when she heard the clatter of the dogs coming. She kept the remnant that was in the kettle so that if she could take it with her, well, but if the dogs should come close she might throw it at them. She saw the dogs coming. She took the lid from it and threw them a quarter of what was in it: that kept them busy for a while. They were coming again, and she threw another piece at them when they closed upon her. Off she went, making all the haste she could; when she got near the farm she up-ended the pot and threw down for them all that was left in it.

The dogs of the farm struck up a-barking when they saw the dogs of peace stopping.

The woman of peace never came more to seek the kettle.