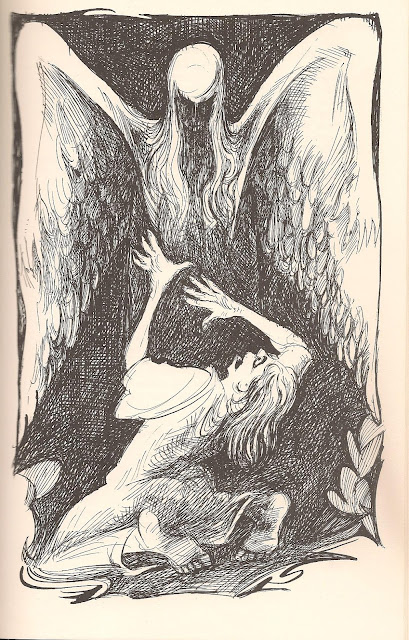 This Armenian story is a good example of a fairy tale with no fairies and no magic – but that’s more than made up for by the excellent trick the sharp-witted, poor-but-proud little heroine plays on a very gullible prince who is none of those things. His behaviour is outrageous harassment, the (doomed) ploy of a privileged, mannerless young man to get a girl’s attention. You wouldn’t think it could end well - but it does, and that’s entirely down to the heroine’s actions. Not only does she get her own back (in spades), she personally manufactures a situation in which the prince stands a good chance that his worried father will allow him to marry her. Seamstresses don’t usually marry princes – so perhaps she's had her eye on him, too!

Charles Downing who translated this story notes that the original title was Derdziki aghdjik: ‘The Tailor’s Daughter’ and that it was told in the 19th century  “by a certain Ephrem Vasakian, of whom nothing but his name is known”. It was collected in Hay zhoghovrdakan heqiathner: ‘Armenian Popular Tales’ by I. Orbeli and S. Taronian. The English translation was published in the collection ‘Armenian Folk-tales and Fables’, tr. Charles Downing, OUP 1972

Once upon a time there was a tailor and his wife. They had a little daughter whom they loved dearly, and one day the tailor took his daughter and placed her with an old woman to learn how to sew.

Opposite the old woman’s house stood the royal palace, and every day the King’s son would walk up and down upon the balcony wondering what the girl looked like, and how he could get her to talk to him. For whenever she walked past, the little seamstress kept her eyes firmly on the ground and paid him no attention.

One day the prince thought of a way to make her speak to him, and he called to her from the balcony as she passed by,

“Hey there, tailor’s daughter, little bitch! How many threads are there in a piece of cloth?”

The girl did not reply.

The prince repeated his question three times, and then the little seamstress, still averting her head, said,

“Hey there, King’s son, son of a dog! How many stars are there in the heavens?” She repeated her question three times, and still she did not look up at the prince.

The prince thought and thought. How was he to play a trick on this girl and get his own back? He summoned the old woman who was teaching the girl how to sew.

“Grandmother,” said he, “I’ll give you whatever you want, but bring me to your little apprentice, so that I may give her a kiss.”

“Very well, prince,” said the old woman, “may I be a sacrifice to your head and life! Your wish is my command.”

She brought out  a large, wooden chest, and next morning – without telling the little seamstress – she smuggled the prince into it and hid him, covering the top with various garments. Then she called her young apprentice:

“My child, when you have finished, put your needlework away in the large wooden chest.” The girl obeyed, and when she lifted the lid to put away her needlework, out popped the prince, who caught her around the waist and kissed her.

The little seamstress made no song and dance about it. She said nothing and went home where she lay in bed and pretended to be ill. She did not return to the old woman’s house for several days. “What shall I do to get my revenge?” she kept asking herself.

Her mother and father could see something had upset her.  “Child,” said they, “what are you brooding about? Tell us what you want, and we shall do it for you if we can.”

“Father,” said the little seamstress. “Sew me a large white cloak. Make it so that only my eyes will be visible when I put it on. Stitch feathers on the back to look like angels’ wings, and cover it so thickly with little bells and baubles that there’ll be no room for even the head of a needle.”

Her father made the cloak and brought it to her. “It has given me a lot of trouble,” he said. “Try it on, my child, and let me see if it fits you.”

She put it on, flounced about and flapped the wings, and was satisfied she really did look like an angel in it. She took it off. “I am going to my sewing-mistress’s house now, and I shall not be back tonight.”

She went to the old woman’s house. “I am going to stay with you tonight,” she said. “My mother and father have had to go on a journey.”

That night after supper the little seamstress secretly left the house and stole into the palace. While everyone was sleeping she crept into the prince’s antechamber, put on her costume and then tiptoed into the prince’s bedroom. Here she hopped about and flapped her wings, and the sound of tiny bells filled the room.

The prince opened his eyes; he saw the strange white figure standing over him and was terrified! “Ah! What are you? What do you want of me?”

“I am the angel Gabriel,” said the vision, “and I have come to take your soul!”

“I’m an only son!” cried the prince. “Take all my treasure, take my hidden gold, but do not take my soul!”

“If that’s the way of it,” said the apparition, “you shall have ten days’ grace. But I shall take a token from you in surety.”

The prince was trembling, shaking from head to foot. “Take what you wish!”

The angel picked up the prince’s golden wash-basin. “Be ready! In ten days time I shall return for your soul!” And she left.

The little seamstress took off her disguise, went home, wrapped the golden wash-basin in some old clothes and put it in a chest. Dawn broke. She sat down to work.

The prince was completely shattered by his meeting with the Angel of Death. He got up half-paralysed, then crawled out slowly on to the balcony.

“If I do have to die,” he said to himself, “I shall make that girl talk to me first.” And when she passed by he called out,

“Hey there, tailor’s daughter, little bitch! How many kisses are there in a wooden chest?”

He repeated his question three times.

The prince pondered these words. “The girl is an astrologer!” he said to himself. “She has read the stars and learned of my approaching death!” He went in and flung himself on his bed. “Woe is me, woe!” he wept. “I’m going to die!”

Then he began to think. “The girl knows all about my coming death, about the number of stars in the sky and about the angel Gabriel. She knows everything – I must marry her!”

He sent a valet to his father the King to tell him that he was dying, and his father and mother hurried to his bedside. “What does our kingdom lack, that you should lie there weeping?” they cried. “We shall send for a good doctor to cure you!”

“I want the tailor’s daughter in marriage,” said the prince. “Ask for her hand for me.”

“We shall fetch her!” said the King. “If she will come voluntarily, good; if not we shall make her. Anything, so long as you get better!”

He sent messengers to the tailor’s house to ask his daughter’s hand in marriage for the prince. When his daughter came home from work, her father said, “They have come from the court to ask for your hand, daughter. Do you want to marry the King’s son?”

“If you are willing to give me away, father,” said she, “I am willing to marry him.”

So the parents took the little seamstress to the palace and she was married to the prince. They were put to bed together. But her husband just lay there crying, “Woe is me, woe! I’m going to die!” and didn’t pay any attention to his new bride.

“Ah, tailor’s daughter!” sighed the prince, “what can I do? In six days time I am going to die!”

“If you have only six days left,” said his wife, “I am leaving you!”

She rose from the bed. She had brought her angel’s robe with her, along with her dowry and trousseau, so went out into the antechamber and donned the robe.

Just as he said that, the girl came into his bedroom dressed in her angel’s robe with the feathery wings and the little bells, and flapped and fluttered.

“Alas!” lamented the prince. “The angel has come for me early!”

“I may as well take your soul right now!” said the angel. Then the prince fell dumb with fear and his knees knocked – and the little seamstress relented in case she frightened him to death.

“Silly boy!” she laughed – and nudged him with her elbow. “I am not the angel Gabriel. I am your wife!”

The prince could not believe it. “If you are my wife, take off that robe and let me see you!”

The little seamstress took off her disguise.

“Show me my golden wash-basin!”

The little seamstress went to the chest, took out the golden wash-basin and placed it before the prince.

“Wife, you must be a witch!” said the prince. “Tell me the truth. Are you on familiar terms with angels? Can you see the future?”

“I foresee that you will have a long life and never die – and will one day be king of this land!” said the little seamstress.

“How many stars are there in the heavens, then?” asked the prince. “For since you asked me, you must know.”

The prince saw how he had been outwitted, and he laughed. He rose from his bed and the wedding feast went on for seven days and nights – and as they achieved their hearts’ desire, so also may you!

Posted by Katherine Langrish at 02:18