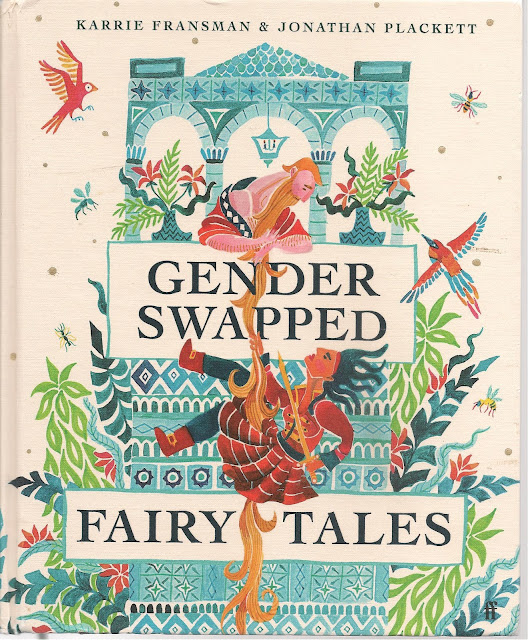 In this sumptuous book (published by Faber) wife-and-husband team Karrie Fransman and Jonathan Plackett have chosen twelve classic fairy tales, and flipped the genders of all the characters. As they explain in their introduction:

Fairytales are the ideal genre to gender swap. They are some of the earliest stories we are exposed to as children and form the very building blocks of story-telling. … Most importantly they teach us the difference between ‘good’ and ‘evil’ and about the moral codes that govern our society: that boys should bravely scale giant beanstalks to claim what is rightfully theirs, or that little girls should be wary of talking to strangers in dark woods.[…] However, if we can imagine a world where harps sing and rats transform into coachmen, can we not … also imagine a world where kings want kids and where old women aren’t witches?

I approached the book with a mixture of interest and trepidation. It has long been my mission to try and correct the misapprehension so many people unfortunately have, that fairy tales are all about insipid princesses asleep in towers waiting for true love’s kiss. There are shedloads of fairy tales about bold, active, witty young women and passive, forgetful or foolish young men; in fact I’ve recently compiled a series of thirty such tales which you can visit at this link. But the fairy tales we know best, the ones Disney has made so popular, do tend to depict the type of gentle, patient heroine which suited the social preferences of 19th century editors. So for example the ‘Cinderella’ of most children’s fairy books is the beautiful, long-suffering, forgiving heroine of Charles Perrault’s version, not the Grimms’ more active, headstrong one.

Of the twelve well-known tales which Fransman and Plackett have chosen for their gender-flipping experiment, some are more successful than others. ‘Cinder’ – based on Perrault’s version of ‘Cinderella’ – works remarkably well, since the ambiance is that of the 17th century salons, where to appear suitably dressed, fashionable young gentlemen might spend a great deal of time and money. Here we find Cinder’s two step-brothers preparing for the Queen’s daughter’s ball:

‘For my part,’ said the eldest, ‘I will wear my red velvet suit with French trimmings.’

‘And I,’ said the youngest, ‘shall have my usual pantaloons: but then, to make amends for that, I will put on my gold-flowered cloak, and my diamond chest-piece, which is far from being the most ordinary one in the world.’

They sent for the best tire-man they could get to make up their head-dresses and adjust their neckerchiefs, and they had their red brushes and patches from Monsieur de la Poche. 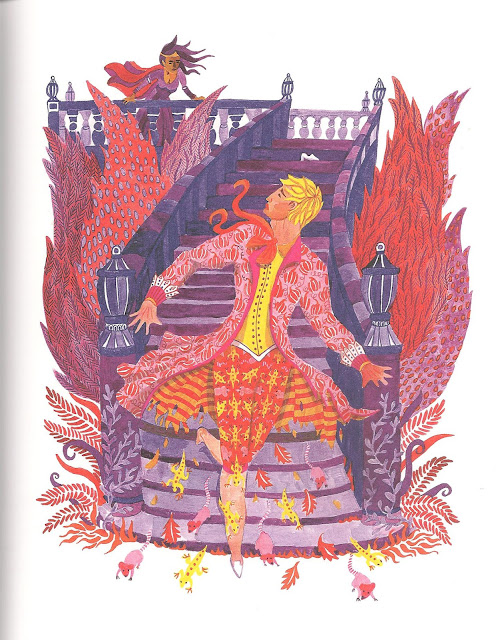 The authors deliberately have not rewritten these tales, which are faithfully based on those in the Langs’ Blue, Red and Yellow Fairy Books. Gendered articles of clothing are flipped: ‘petticoat’ becomes ‘pantaloons’, for example. ‘Wigs’ might have been a better swap for the original ‘head-dresses’: but the tale’s emphasis on fashion and civility works well for Cinder the aspiring young gentleman. It was a wise choice to go for Perrault’s version and not the Grimms’, with its wilder heroine and more vengeful ethos.

A few of the other tales don’t work quite so well. Almost nothing happens when  ‘Hansel and Gretel’ becomes ‘Gretel and Hansel’, since the brother-and-sister pair of the original fairy tale share the action equally: Hansel’s idea is to leave the trail of pebbles and later of crumbs so they can find their way home, while Gretel rescues Hansel by shoving the witch into the hot oven. Reversing their roles doesn’t strengthen the tale, in fact it makes Gretel appear more of the victim. ‘Rapunzel’ doesn’t really work for me either: in the Grimms’ original tale a man climbs a wall into a witch’s garden to steal the herbs his pregnant wife longs for. (She can’t climb into the garden herself because she’s pregnant.) In the gender-swapped version she’s still pregnant, but climbs into the (wizard’s) garden anyway to get the herbs her husband longs for; why couldn’t he do it himself? Then she promises to give the wizard her unborn child. This wreckage of narrative sense bothers me considerably more than the mildly ludicrous vision of the boy Rapunzel imprisoned in the tower with his long beard. (‘Rapunzel, Rapunzel, let down your beard!’ cries the Princess.)

‘Jaccqueline & the Beanstalk’ (although I wish she had been Jill), and ‘Handsome & the Beast’ are both very effective. In the one, we have a girl climbing a beanstalk and chopping it down; in the second, the love story works just as well with a female Beast and a male ‘Beauty’ – and it’s nice that Handsome’s mother is a prosperous merchant. 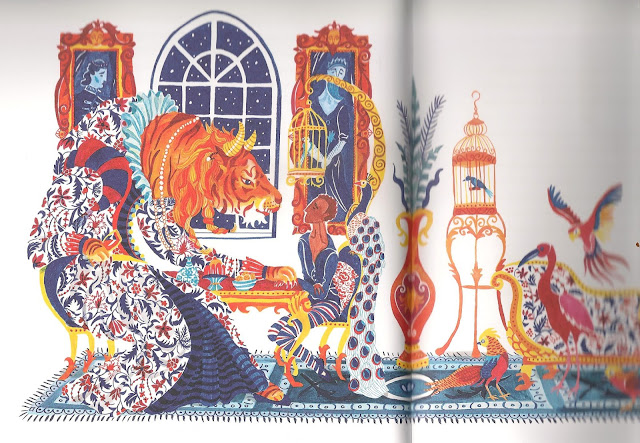 ‘Snowdrop’ opens with a King who longs for a child and does embroidery. And why not? Both in and out of fairy tales, Kings have longed for children, especially heirs. At first I wasn’t convinced that the motive of the child’s stepfather (the Wicked King, so to speak) would be jealousy of Snowdrop’s looks, but then I thought further. The story forced me to imagine a fairy tale world in which a man‘s status and privilege would depend upon his beauty – where his power would depend upon the favour of women. And if that seems unnatural, well, it’s worth considering why, isn’t it? I also enjoyed the rather Amazonian Huntswoman who spares Snowdrop’s life, and it was fun to meet female dwarfs at last, who as we might suppose, work away just as diligently as the male ones.

As a title, ‘The Sleeping Handsome in the Wood’ feels clumsy in English though it might work in French: Perrault’s ‘La Belle au Bois Dormant’ turning to ‘Le Beau au Bois Dormant’. (‘The Sleeping Prince in the Wood’ might have been better?) Once again, Charles Perrault’s story is so decorated and fanciful that we can easily believe it is a lively Prince who ‘diverts himself by running up and down the palace’, runs a spindle into his hand and falls asleep looking ‘like a little angel’. I like the daring  Princess who penetrates the wood to reach the castle and wake him. But the second half of the tale, which I’ve always viewed as an addendum, in which the couple’s children and their mother (in this case, their father) are almost eaten by the Prince’s ogress mother (in this case, the Princess’s ogre father) works less well, since while it’s possible to imagine the Princess – daring as she is – hiding her marriage from her parents while still living with them, it’s far more difficult to imagine her hiding two pregnancies. It’s a pleasant touch to see the children’s roles reversed so that the little girl learns to fence, and is naughty, while the little boy is the quiet one.

In ‘Thumbelin’ – based of course on Hans Christian Andersen’s ‘Thumbelina’ – the gentle little boy who tends the sick swallow actually works better than the original little girl. Or so I think. ‘Thumbelina’ itself was probably inspired by the English fairy tale of ‘Tom Thumb’; but that story is all accidents and adventures as Tom gets into mischief, is swallowed by cows and fishes and ends up at King Arthur’s court. (Might we see a gender-swapped ‘Tom Thumb’ one day?) Where Tom Thumb is active, Thumbelina/Thumbelin is reactive: typically of Andersen, the tale is about suffering, social rejection and loneliness, as the child avoids a series of forced marriages and at last finds a place to belong. In the gender-swapped version, here’s the bit where a beetle, a cockchafer, discards the tiny boy she has flown off with.

All the other cockchafers who lived in the same tree came to pay calls; they examined Thumbelin closely and remarked, ‘Why, he has only two legs! How very miserable!’

‘He has no feelers!’ cried another.

‘How ugly he is!’ said all the gentleman cockchafers – and yet Thumbelin was really very pretty. […] There he sat and wept, because he was so ugly that the cockchafer would have nothing to do with him; and yet he was the most beautiful creature imaginable…

‘Gender-Swapped Fairy Tales’ is well worth a look. Its use of 19th century texts may make it less accessible to children; though there is no reason why they shouldn’t enjoy them, they might struggle to read them alone. (And anyone reading it aloud to a child should be warned that this tough version of ‘Little Red Riding Hood’ ends with the child being gobbled up by the wolf. No rescue, no woodcutter!) But for fairy tale fans, it offers a thought-provoking take on some over-familiar old tales. It is also beautifully produced, and the artwork by Karrie Fransman is truly gorgeous. 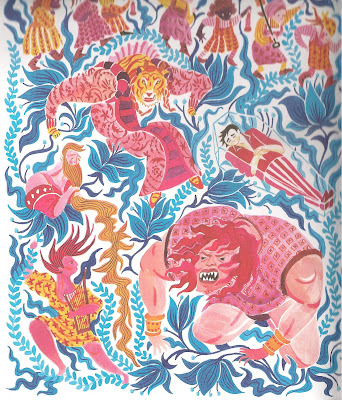 Posted by Katherine Langrish at 05:38