Tales from the Elf-Mounds of Ireland (1) 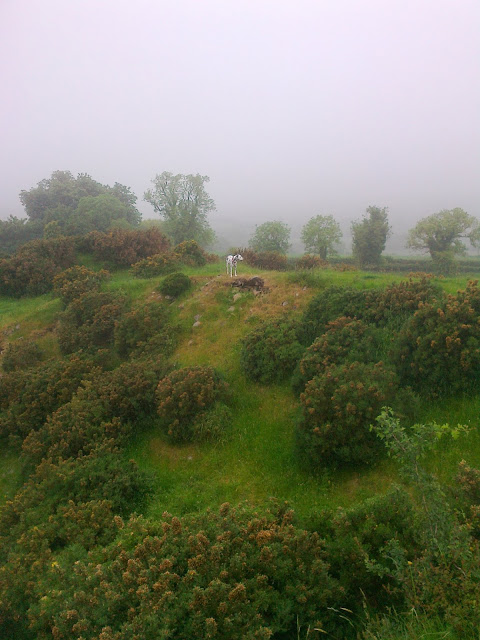 A couple of years ago, on our way to visit a friend in Ireland's County Donegal, we broke the journey by staying a couple of nights in the Boyne Valley, home to some of the most impressive Neolithic monuments anywhere in the world. Brú na Bóinne, also known as Newgrange, and its companion mounds Knowth and Dowth are stupendous megalithic passage graves dating to around 3,300 BC, hundreds of years older than the earliest Egyptian pyramid.


We struck lucky: the place we stayed turned out to be a beautiful old house with lovely views next door to the great mound of Dowth: and I mean next door – the mound towered right up over the garden fence; we could go out before breakfast or last thing in the evening with our dog Polly and walk around it and over it and have it completely to ourselves. Dowth, or Dubad, is not a tourist site like its companion tombs, Knowth and Newgrange. No shuttle buses visit it. There is a huge crater at its centre, the result of the local landlord blasting a hole in it with dynamite sometime in the 19th century. If he hoped to find treasure, he was disappointed. But the mound was so massive and so well built that even the explosion did not damage either of the two passage graves deep within. Here's one of the two entrances, with Polly nosing around to give it scale: in the foreground is one of the huge carved sill-stones which edge the entire perimeter of the mound. This one is carved with spirals. 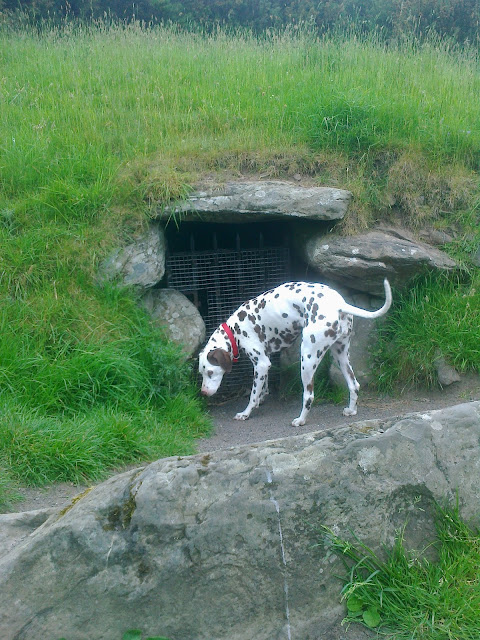 You can't go in; there's a locked iron gate. I tried to take a picture through it, and maybe you can just make out the passage running back into the mound towards the inner chamber. 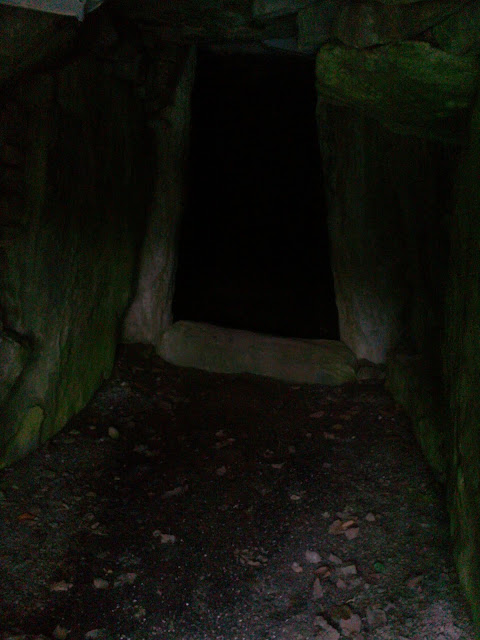 We walked over and all around the mound. One of the great kerb-stones is carved with seven suns; the picture I took didn't come out too well: 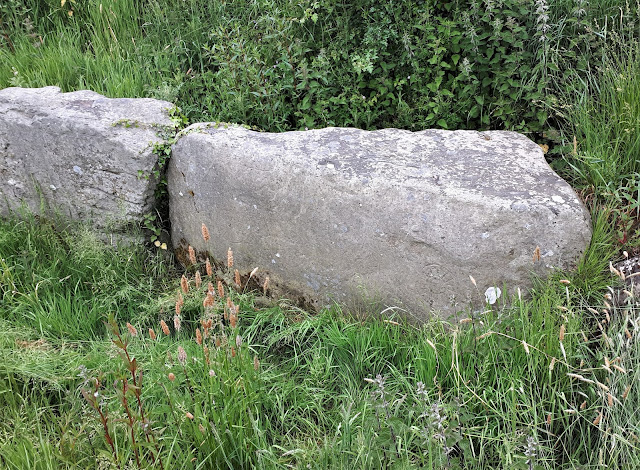 ... but there's a lovely Youtube timelapse of it taken during a winter sunrise by Anthony Murphy of the blog Mythical Ireland:

Of course there is a legend about this amazing place: the story goes like this. Long ago in the time of a king called Bressal Bó-dibad, a plague struck down all the cattle of Ireland until at last there were only eight left, one bull and seven cows. (The second part of the king’s name means ‘lacking in cattle'.) So Bressal Bó-dibad decided to build a tower ‘like the Tower of Nimrod’, so that he could pass into heaven. Who knows what he meant to do there? Challenge God to restore his cattle? The tale doesn't say, but men from all over Ireland came to help him build the tower – the mound, that is – but there was a condition: the work must be completed within a single day. So the king’s sister told him that she would ‘stay the sun's course in the vault of heaven, so that they might have an endless day to accomplish their task’. She worked her magic and the sun halted in mid-sky, as it did for Aaron and Moses in the Bible. But Bressal Bó-dibad went after his sister and committed incest with her; he raped her. Then her spell was undone, darkness fell and the men of Ireland abandoned their work. And the king’s sister cursed the mound, saying: 'Dubad [darkness] shall be the name of this place for ever.'

If that doesn’t give you the shivers, I don’t know what will. And then to find the stone with the seven suns, half buried in the grasses… well! 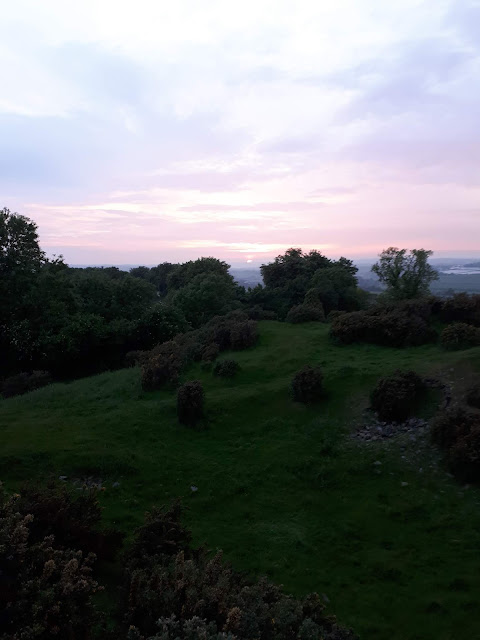 You can read more about the legend and the mound at Anthony Murphy’s blog Mythical Ireland, here: http://blog.mythicalireland.com/2016/06/dowth-and-story-of-hunger-ancient.html

Posted by Katherine Langrish at 02:32