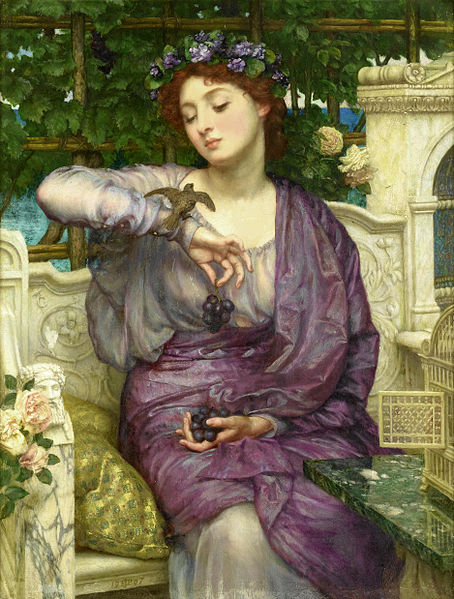 This post first appeared on The History Girls blog in April 2018
Gaius Valerius Catullus didn’t live long. Born into a wealthy family near Verona in around 84 BCE, he was dead by the age of thirty. But in this short space he made his mark as a lyric poet who, like Sappho perhaps, derived much of his extraordinary force from elements of his own life: he speaks so directly and so personally to the reader that we almost feel we know him. He wrote fiercely and wittily of both love and hatred. Many of his poems are savagely scatological (there’s a typical example here). He satirised Julius Caesar and was forgiven. His work survived in a single manuscript of 116 poems, so we’re lucky to have him. According to the Poetry Foundation website, Catullus' poetry addresses
...contradictory alternatives or tendencies: learning and passion; seriousness and frivolity; conservative values and revolutionary attitudes; ethical “piety” and vulgar obscenity; accounting and kissing; the great themes of Rome—love and betrayal, war and death; and lesser preoccupations with napkin stealing, urine, buggery, and bad breath.

Yes, well...  It was probably in Rome that Catullus fell in love with the woman he names ‘Lesbia’ in his poems. She is usually identified as Clodia Metellus, a married lady who – from what he says – seems to given him the run-around and to have had a number of other lovers besides him. Two of the best known of the poems he wrote to her, or for her, or about her, concern her pet sparrow. Known in the canon as Catullus II and Catullus III, the first poem is a delicate, lively and distinctly eroticized account of the poet watching Lesbia playing with the sparrow and offering it her finger to nip. The strength of the poem is the tension set up between the girl’s apparent absorption with her pet, and Catullus’ voyeuristic gaze. You can read it at this link. 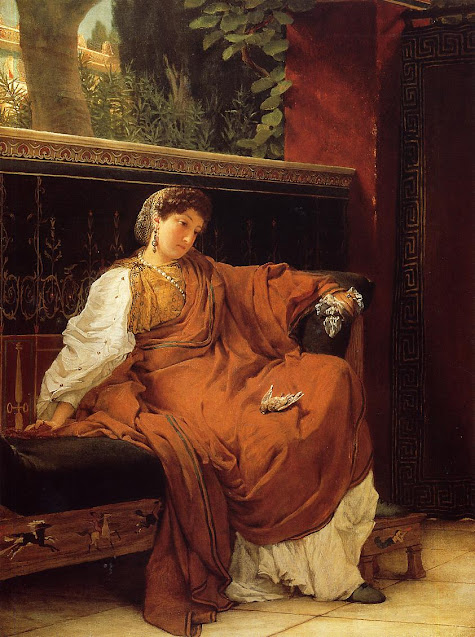 But it's the second poem I want to talk about. It's a lament: the sparrow is dead. Here’s the Latin:

Here is a prose translation by Leonard C. Smithers, published in 1894:

O mourn, you Loves and Cupids, and all men of gracious mind. Dead is the sparrow of my girl: sparrow, darling of my girl, which she loved more than her eyes; for it was sweet as honey, and its mistress knew it as well as a girl knows her own mother. Nor did it move from her lap, but hopping round first one side then the other, to its mistress alone it continually chirped. Now it fares along that path of shadows from where nothing may ever return. May evil befall you, savage glooms of Orcus, which swallow up all things of fairness: which have snatched away from me the comely sparrow. O wretched deed! O hapless sparrow! Now on your account my girl's sweet eyes, swollen, redden with tear-drops.

This little poem is so lovely, so tender - so playfully and deliberately conscious of the chiaroscuro created by sensuous physicality contrasted with death, it probably defies translation. So, I thought it would be interesting to look at a couple of different attempts. Put them together and maybe those of us who don’t read Latin (that includes me) can get an inkling of the original? Let’s start with Lord Byron who published his own translation at the age of nineteen in ‘Hours of Idleness’, 1807:

Ye Cupids, droop each little head,
Nor let your wings with joy be spread,
My Lesbia's favourite bird is dead,
Whom dearer than her eyes she lov'd:
For he was gentle, and so true,
Obedient to her call he flew,
No fear, no wild alarm he knew,
But lightly o'er her bosom mov'd:

And softly fluttering here and there,
He never sought to cleave the air,
He chirrup'd oft, and, free from care,
Tun'd to her ear his grateful strain.
Now having pass'd the gloomy bourn,
From whence he never can return,
His death, and Lesbia's grief I mourn,
Who sighs, alas! but sighs in vain.

Oh! curst be thou, devouring grave!
Whose jaws eternal victims crave,
From whom no earthly power can save,
For thou hast ta'en the bird away:
From thee my Lesbia's eyes o'erflow,
Her swollen cheeks with weeping glow;
Thou art the cause of all her woe,
Receptacle of life's decay.

Byron’s got the sweetness but misses the emotional strength. He apostrophises the Cupids but leaves out those more weighty ‘men of gracious mind’ from the first line, and the effect is to trivialise the poem. So does his omission of the line where Catullus says that Lesbia knows the sparrow as well as a girl knows her own mother – which speaks of a strong, tender, nurturing relationship. I’m not sure he’s hit off the playful mock-heroics either: Catullus portrays this sparrow almost as a sort of Aeneas descending into the underworld... Finally it would have made better poetry, and been truer to Catullus, to have changed the order of lines in the last verse, so:

Thou [ie: the grave] art the cause of all her woe,
Receptacle of life's decay:
From thee my Lesbia's eyes o'erflow,
Her swollen cheeks with weeping glow.

The poem ought to end with the girl’s swollen, tear-filled eyes – which you can feel Catullus is longing to kiss – but Byron can’t manage it because the form he’s chosen demands that each eight-line verse rhymes AAAB/CCCB: the eighth and final line must rhyme with the fourth. And so he ends on a vision of the grave straight from an 18th century tombstone, ‘Receptacle of life’s decay’ – rather than leaving us with Catullus's erotically charged and tactile close-up of Lesbia’s face. 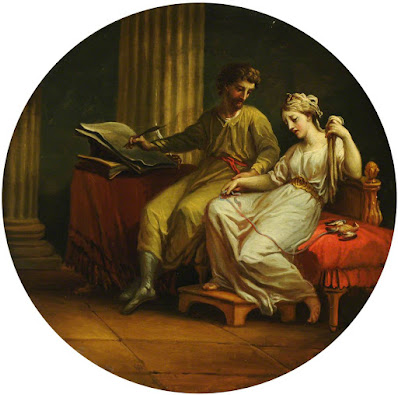 Weep every Venus, and all Cupids wail,
And men whose gentler spirits still prevail.
Dead is the Sparrow of my girl, the joy,
Sparrow, my sweeting's most delicious toy,
Whom loved she dearer than her very eyes;
For he was honeyed-pet and anywise
Knew her, as even she her mother knew;
Ne'er from her bosom's harbourage he flew
But 'round her hopping here, there, everywhere,
Piped he to none but her his lady fair.
Now must he wander o'er the darkling way
Thither, whence life-return the Fates denay.
But ah! beshrew you, evil Shadows low'ring
In Orcus ever loveliest things devouring:
Who bore so pretty a Sparrow fro' her ta'en.
(Oh hapless birdie and Oh deed of bane!)
Now by your wanton work my girl appears
With turgid eyelids tinted rose by tears.

He’s got the sweetness, the eroticism and the darkness too: he almost succeeds in the mock-heroics (‘evil Shadows low’ring/In Orcus ever loveliest things devouring/ ...Oh hapless birdie and Oh deed of bane...’) His choice of poetic diction is an interesting blend of the archaic and stiff – ‘Thither, whence life-return the fates denay’ – and the vernacular – ‘my girl’. I think it just about works in its own right, but it’s very mannered and doesn’t sound like somebody chatting to us.

The same cannot be said of Dorothy Parker’s wonderful riff on the poem (included in ‘The Original Portable’, 1944) – which gives Lesbia herself a voice, and some very distinct opinions!

From A Letter From Lesbia

... So, praise the gods, Catullus is away!
And let me tend you this advice, my dear:
Take any lover that you will, or may,
Except a poet. All of them are queer.

It's just the same – a quarrel or a kiss
Is but a tune to play upon his pipe.
He's always hymning that or wailing this;
Myself, I much prefer the business type.

That thing he wrote, the time the sparrow died –
(Oh, most unpleasant – gloomy, tedious words!)
I called it sweet, and made believe I cried;
The stupid fool! I've always hated birds...

It’s not, of course, a translation at all. But I reckon Catullus would have loved it. 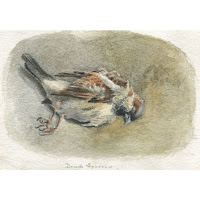 Posted by Katherine Langrish at 04:36