The Fairy Flag and the Paths of the Dead


You remember the episode in JRR Tolkien’s ‘The Return of the King’ in which Aragorn, Gimli and Legolas dare to enter the Dwimorberg or Haunted Mountain, with the aim of gathering a host of the Dead to prevent the Corsairs of Umbar from coming to the aid of Mordor during the siege of Gondor? But which version do you remember – Tolkien’s or Peter Jackson’s? For the usually excellent Peter Jackson film goes full-on Indiana Jones  at this point, with cathedral-vast caverns glowing in eerie green light, smoking dry ice and grimacing skeletal phantoms, climaxing in an avalanche of skulls which almost buries our heroes as they struggle out of the mountain.

For me, Tolkien’s far more restrained treatment is more effective (and it’s easy to forget that in the book, Aragorn and his friends are also accompanied by a troop of the Dunedain, and Elladan and Elrohir, the two sons of Elrond). And the bargain between Aragorn and the Dead doesn't occur underground. The company passes through the dark tunnels under the mountain with the invisible, menacing host following at their heels; they emerge on the other side into a blue dusk and then ride for another whole day all the way up through Morthond Vale to the ancient Stone of Erech, where prophecy has decreed the oath-breaking dead must one day come. Here is a lightly abridged version of what happens next:

Long had the terror of the Dead lain upon that hill and upon the empty fields about it. For upon the top stood a black stone, round as a great globe, the height of a man, though its half was buried in the ground. … None of the people of the valley dared to approach it … for they said it was a trysting place of the Shadow-men, and there they would gather in times of fear, thronging round the Stone and whispering.

To that Stone the Company came and halted in the dead of night. Then Elrohir gave to Aragorn a silver horn, and he blew upon it; and … they were aware of a great host gathered all about the hill on which they stood; and a chill wind like the breath of ghosts came down from the mountains. But Aragorn dismounted, and standing by the Stone he cried in a great voice:

‘Oathbreakers, why have ye come?’

And a voice was heard out of the night that answered him, as if from far away:

‘To fulfil our oath, and have peace.’

Then Aragorn said, ‘The hour is come at last. Now I go to Pelargir upon Anduin, and ye shall come after me. And when all this land is clean of the servants of Sauron … ye shall have peace and depart for ever. For I am Elessar, Isildur’s heir of Gondor.’

And with that he bade Halbarad unfurl the great standard which he had brought, and behold! it was black, and if there was any device upon it, it was hidden in the darkness. Then there was silence, and not a whisper nor a sigh was heard again all the long night. The Company camped beside the Stone, but they slept little, because of the dread of the Shadows that hedged them around. […] But the next day there came no dawn, and the Grey Company passed on into the darkness of the Storm of Mordor and were lost to mortal sight; but the Dead followed them.

We hear the sequel from Legolas and Gimli: how, coming to Anduin, the Shadow Host swept over the Corsairs’ ships like a grey tide, till mad with terror they leapt overboard and, ‘reckless we rode among our fleeing foes, driving them like leaves’. 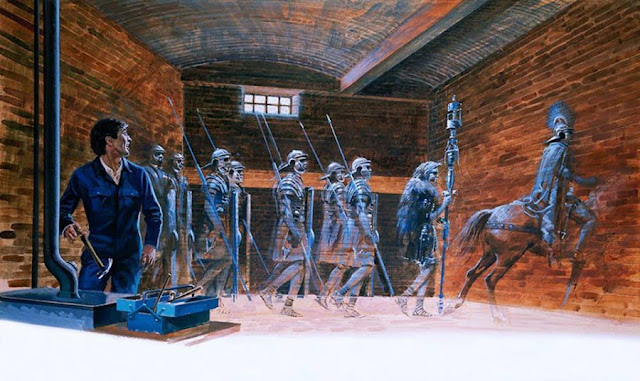 Now, ghostly armies are not uncommon in British folklore. Roman soldiers are glimpsed steadily marching along old roads, or even through the cellars of the Treasurer's House in York (pictured above), and Civil War battalions are seen fighting in the sky over Edgehill, Marston Moor and Naseby, but in all these cases the phantoms re-enact old battles rather than join new ones. The story of ‘The Angels of Mons’ is an exception, but that was based upon Arthur Machen’s short story ‘The Bowmen’, published in September 1914, in which the ghostly bowmen of Agincourt come to the aid of British troops. To Machen’s dismay his tale was mistaken by some to be a factual account, and swiftly morphed into an unstoppable legend.

Most phantom armies are visions or memories of past conflicts. But an unusual story from Skye has me wondering whether Tolkien knew of it, and if it influenced his account of Aragorn’s mustering the Hosts of the Dead. It is the tale of the Fairy Flag of the Macleods. 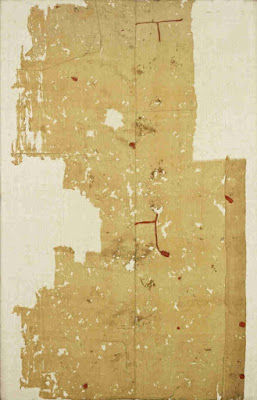 The flag really exists. It is a rectangle of very old silk, much tattered and worn, said once to have been bordered with red crosses which have now faded from sight, and spotted with red ‘elf-marks’. Experts at the ‘South Kensington Museum’ – as the V&A was known until 1899 – who examined it in the late 19th century thought it might be of Syrian origin, with a date sometime between the 4th and 7th centuries. It is still treasured in the Macleod stronghold of Dunvegan Castle on Skye. 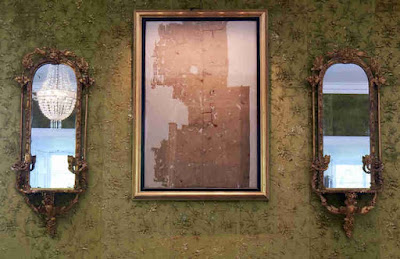 How it came into the Macleods’ possession is lost to history, but legend says it was a fairy gift. There are various versions of the story, but the gist is that one of the early Dunvegan chieftains took a fairy bride. The couple were happy together until their son was born, but then ‘the call to return to her own people came to her. Against this order there was never, for her or for others, any appeal.’ At the Fairy Bridge – again, a real bridge, where the road south from Dunvegan Castle forks east towards Edinbane – they parted, never to meet again. In one version, the fairy gives him the Flag at their parting; in another, she comes invisibly to cover her child with it when he wakes cold and lonely in his cradle while a feast is held in his honour downstairs. In all versions, the Flag is given to the Macleods with the promise of immediate and powerful supernatural assistance, if it is waved in peril or trouble. There is one condition: only three times may it be used in this way. So far it is said to have been used twice.

One occasion was in 1578, when the Macleods’ hereditary enemies the Macdonalds landed eight boats at Trumpan on the Waternish peninsula of Skye while most of the inhabitants were at church, and set it alight. Those inside died in the fire, or were cut down as they tried to escape, but one person managed to raise the alarm: and the flames were also seen by the Macleod watchman from the top of Dunvegan Castle. Here’s what happened next: the account is from ‘Skye: The Island and its Legends’ by Otta Swire (1952):

The Macleods came with what strength they could muster close at hand. The Macdonalds had been delayed by a force of old people and boys whose strength they could not estimate. By the time they reached the shore the tide had gone down, and their galleys lay high and dry, while hidden from them the Macleod forces, which had crossed the loch, were already landing. A terrible battle ensued, in which it is said that the Macleods, much outnumbered, had recourse to waving the Fairy Flag, and that the Macdonalds immediately saw a great host approaching (which in fact was not of this world) and fled. Be that as it may, the Macleods were victorious, the Macdonalds being almost annihilated.

So, the Flag was given to the Macleods by a woman of the Sithe, an elf-woman who loved a mortal man but had to part from him. Now, Aragorn’s standard is also the gift of an elf-woman, Arwen Undomiel whom he has long loved and been parted from. It is brought to him by his kinsman Halbarad the Dúnadan, with the message:

‘She wrought it in secret, and long was its making. But she also sends word to you: The days now are short. Either our hope comes, or all hope’s end. Therefore I send thee what I have made for thee. Fare well, Elfstone!’

In both stories, possession of the Flag or the standard identifies the carrier: the Fairy Flag can only be borne and wielded by the Macleods. And though the Dead follow Aragorn to the Stone of Erech, they seem a threat not wholly tamed until the unfurling of the black elf-wrought standard sets the seal upon Aragorn’s claim to be Elessar, heir of Isildur to whom the original oath was sworn, and rightfully able to command them to fulfil their vow. And in both stories the one who wields the flag can, in extremis, call up supernatural reinforcements in the form of a terrifying phantom army.

The Paths of the Dead: Inger Edelfeldt

The Fairy Flag, close-up: courtesy of the Dunvegan Castle website

The Fairy Flag in situ: courtesy of the Dunvegan Castle website

Posted by Katherine Langrish at 07:08

Email ThisBlogThis!Share to TwitterShare to FacebookShare to Pinterest
Labels: JRR Tolkien, Katherine Langrish, phantom armies, Skye legends, the Fairy Flag, The Paths of the Dead, The Return of the King