The Two Sisters and the Curse 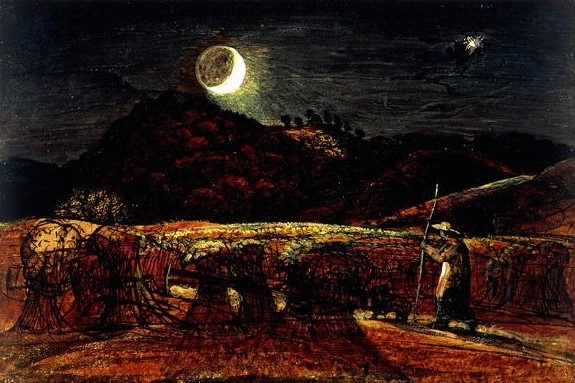 This sinister story is recorded by John Gregorson Campbell in ‘Clan Traditions and Popular Tales of the Western Highlands and Islands’ (1895). In his notes, Campbell explains that the term ‘dun’, applied to a human being, could be an expression of contempt. He adds that the harvest custom was for the last handful of corn to be cut and taken home by the reaper – usually the youngest – and kept as ‘the harvest maiden’ until the following year; and that old women might go about from house to house begging from the harvesters, and whoever was last to finish reaping would have to maintain one of them for a year. (I wonder if ‘last to finish reaping’ implied ‘more furrows to reap’ and therefore more corn to share?  Lastly, I think ‘my sickle will not cut garlic’ must be taken to mean that the sickle is not sharp.

Two sisters were living in the same township on the south side of Mull. One of them who was known as Lovely Mairearad had a fairy sweetheart, who came where she was, unknown to anyone, until one day she confided the secret to her sister, who was called Ailsa, and told her how she dearly loved her fairy sweetheart. ‘And now, sister,’ she said, ‘you will not tell anyone.’ ‘No,’ her sister answered, ‘I will not tell anyone; that story will as soon pass from my lips as it will from my knee!’ But she did not keep her promise; she told the secret of the fairy sweetheart to others, and when he came again, he found that he was observed, and he went away and never returned, nor was seen or heard of ever after by anyone in the place.

When the lovely sister came to know this, she left her home and became a wanderer among the hills and hollows, and never afterwards came inside of a house door to sit or stand, while she lived. The cattle herders often tried to to get near her and persuade her to return home, but they never succeeded further than to hear her crooning a melancholy song which told how her sister had been false to her, and that the wrong done would be avenged on her or her descendants – if a fairy has power. On hearing that Ailsa was married, she repeated, ‘Dun Ailsa is married and has a son Torquil, and the evil will be avenged on her or on him.’ And she sang like this:

My mother’s place is deserted, empty and cold,

My father who loved me is asleep in the tomb,

Friendless and solitary I wander the fields

Since there is none in the world of my kindred

But a sister without pity.

She asked, and I told her, out of the fullness of my joy,

There was none nearer of kin to know my secret:

But I felt, and this brought the tears like rain to my eyes

That a story comes sooner from the lip than the knee.

Then she was heard to utter these wishes:

May nothing on which you have set your expectations ever grow,

Nor dew ever fall on your ground.

May no smoke rise from your dwelling

In the depth of the hardest winter.

May the worm be your store,

And the moth under the lid of your chests.

If a fey being has power,

Revenge will be taken, though it be on your descendents.

Ailsa married and had one son. Her afflicted sister heard of it and added to her song –

And she has a son Torquil.

Brown-haired Torquil who can climb the headland

And bring the seal off the waves,

The sickle in your hand is sharp,

In two swathes you will reap a sheaf.

Whatever other gifts the brown-haired only child of her sister was favoured with, he was a notable reaper, but this gift proved fatal to him. When he grew up to manhood he could reap as much as seven men, and none among them could compete with him. Then he was told that a strange woman was seen coming into the harvest fields in autumn after the reapers had left, and that she would reap a whole field before daylight next morning, or any part of the field that the reapers could not finish that day, and in whatever field she began, she left the work of seven reapers finished after her. She was known as the Maiden of the Cairn (Gruagach a’ chúirn), from being seen to come out of a cairn over opposite.

One evening then, brown-haired Torquil, who desired to see her at work, being later than usual returning home looked back and saw her beginning to reap in his own field. He turned back, and finding his sickle where he had put it away, took it and went after her. Resolving to overtake her, he began to reap the next furrow and said,  ‘You are a good reaper, but I will overtake you;’ but the harder he worked, the more he saw that instead of getting nearer to her, she was drawing further away from him. Then he called out,

He was confident that he would overtake her, and went on after her till the moon was darkened by a cloud; then he called to her,

‘The moon is cloud-smothered, delay, delay.’

When he reached the head of his own furrow, he caught the last handful of corn to keep it, as was the custom, it being the ‘Harvest Maiden’, and stood with it in one hand and the sickle in the other. Looking her steadily in the face, he said,

‘You have kept the old woman far from me, and it’s not my displeasure you deserve.’

She said, ‘It is an ill thing on Monday to reap the harvest maiden.’

On her saying this, he fell dead in the field and never more drew breath. The Maiden of the Cairn was never afterwards seen, or heard of; and that was how the sister’s wishes ended.

A Cornfield by Moonlight with the Evening Star (c.1830) - sketch by Samuel Palmer, British Museum

Posted by Katherine Langrish at 04:12