Ring Out the Old 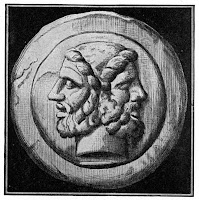 The Roman god Janus, who gives his name to January, looks both ways, fowards into the future and backwards into the past.   He is the gatekeeper of the year: and television and newspapers over New Year still honour him by the custom of examining the past and trying to figure out the future. As this is my first post of 2010, I too will start by looking back before setting out across the threshold of the year.

When I was a child, my parents would send my dark-haired elder brother outside just before midnight on New Year's Eve, armed with a small piece of coal, a coin and a branch of greenery, so he could come in on the last stroke of twelve bearing the gifts of fuel and prosperity.  He couldn't let himself in; he had to ring the doorbell and be formally admitted.  The 'first footer' over the threshold had to be a dark man, for what reason I don't know.  The piece of coal would be wrapped in cotton wool and kept all year.

How old these customs are, who knows?  According to Ovid, the Romans gave away little presents of 'white honey' and a small coin at New Year.  During the medieval period, New Year's gifts were more common than Christmas gifts.  In the wonderful medieval poem 'Gawaine and the Green Knight,' Arthur's courtiers are busy exchanging New Year's gifts and waiting for a 'marvel' to occur before they can dine, when in rides the Green Knight, the mysterious stranger who crosses Arthur's threshold bearing a green branch: 'a holly bob/ That is greatest in green when groves are bare'.  The Green Knight appears menacing: perhaps one of the things he represents is the mystery and challenge of the unknown year ahead.

Another New Year custom was to open all the doors of the house 'to let the old year out'.  And in many parts of Britain it was considered unlucky to throw anything out on New Year's Day: even the ashes from the fire, or vegetable peelings, had to be kept indoors.  And making a very loud noise at midnight on New Year was traditional: the ringing of church bells might also be accompanied by shouting, banging of dustbin lids and the hooting of factory sirens.  Nobody washed clothes at New Year, as superstition held that 'if you wash on New Year you wash for the dead.'  And it was of course unlucky in the extreme to work on New Year's Day.

Which is (of course) why this, my New Year's Day post, comes three days late...  If anyone else remembers any New Year's customs, I'd love to hear them.
Posted by Katherine Langrish at 03:48