A Blog From a Thousand Years Ago

Do you remember the Penguin Classics – that fantastic collection of black-liveried paperbacks comprising translations of classic literature from all over the world?  I began buying them many years ago as a teenager, and - entirely without compulsion - read my way through much of Plato, Sophocles, Aeschylus and Euripides. Call me a geek, but there was even a time when I used to compose Socratic dialogue, for my own amusement, on solitary hillwalks:
'So, for information about sheep you would go to a shepherd?'
'Yes, Socrates.'
'And for information about ships you would talk to a sailor?  Or if you desired to know something about insects you would visit an entomologist?"
'Yes, certainly.'
'And you would think it useless to ask a sailor about sheep, or to demand information about ships from an entomologist?'
'That would be ludicrous indeed, Socrates.'
And pretty soon, after Socrates has established that for information about birds you would go to Bill Oddie, and for details of the lives of celebrities you would buy Hello magazine; and that you would be pretty disappointed in a shepherd who knew nothing about sheep, you find yourself agreeing that a politician really ought to have some notion of the Beautiful and the Good, and to be learned in Law, and that he or she should have some idea of putting the good of the people ahead of themselves - and in fact you find yourself wandering off into all sorts of delightful and unrealistic places.

You could pick up a pretty good education, twenty years ago, simply from buying one title after another out of those blocks of severe black which occupied prominent shelf-space in nearly all bookshops. They were by no means all about the Greeks.  I also read ‘The Conquest of New Spain’ by Bernal Diaz who served under Cortez; ‘The Book of Dede Korkut’ (legends of the Oghuz Turks), and, above all, translations from Chinese and Japanese literature.  Courtesy of Penguin Classics I discovered poems by Li Po, haiku by Bashō, and – perhaps the most enchanting of all, the writings of the eleventh century Japanese lady Sei Shōnagon, who is the person I really want to talk about today, and whose ‘Pillow Book’ has to be one of the most urbane and delightful books in the world. 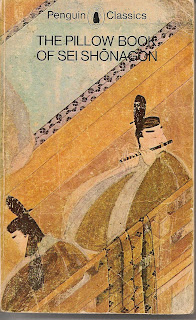 Shōnagon was born around 965, according to Ivan Morris’s introduction to the book (all quotations below are taken from his Penguin translation).  She acted as lady-in-waiting to the Empress Sadako at the court of the mid-Heian emperor Ichijō.  This was a fascinatingly cultured and civilized court.  At a time when in England, Ethelred the Unredy (or the Ill-advised) was trying to buy off the Vikings, and literacy was the province mainly of monks, in upper-class Heian Japan you could not even function socially (still less conduct a love-affair), without the ability to write – at a moment’s notice – impromptu verse in beautiful calligraphy, complete with allusions to classical Chinese poetry.
It was also a time when Japanese women – women, note: women in particular – were opening up the possibilities for writing in the vernacular: in Japanese.  This was because although both men and women were literate, the men tended to get that extra bit of education and learned Chinese too (rather like learning Latin).  And they then wrote in Chinese and remained derivatory, whereas the women were writing in their own native idiom and composing great works of literature.  Murasaki Shikibu’s immensely long and wonderful novel ‘The Tale of Genji’ dates from this period: she was a contemporary of Sei Shōnagon – and disliked her:
‘Sei Shōnagon has the most extraordinary air of self-satisfaction… She is a gifted woman, to be sure.  Yet, if one gives free rein to one’s emotions even in the most inappropriate circumstances, if one has to sample each interesting thing that comes along, people are bound to regard one as frivolous.  And how can things turn out well for such a woman?’
How modern and catty does that sound?  Anyway, Shōnagon’s ‘Pillow Book’ is a collection of miscellaneous writings bundled together over about ten year’s worth of observations, and ranges from gossip and scandal, to the beauties and sadnesses of the world, to things as mundane as the extraordinary way the lower classes shovel in their food (yes, she was a snob).  Clearly personal, clearly also intended to be read and admired, the 'Pillow Book' is really very much like a blog… but a blog from a thousand years ago.
One of her most fascinating habits is the occasional interspersion of lists of various things with different qualities.  Like this:
Depressing Things
A dog howling in the day time.  A lying-in room when the baby has died.  A cold, empty brazier.  An ox-driver who hates his oxen…
One has written a letter, taking pains to make it as attractive as possible, and now one impatiently awaits the reply.  ‘Surely the messenger should be back by now,’ one thinks.  Just then he returns, but in his hand he carries, not a reply, but one’s own letter … now so dirty and crumpled that even the ink mark on the outside has disappeared.  ‘Not at home,’ announces the messenger. Oh, how depressing!
Things That Give a Clean Feeling
An earthen cup. A new metal bowl.  A rush mat.  The play of light on water as one pours it into a vessel.  A new wooden chest.
Adorable Things
One picks up a tiny lotus leaf that is floating on a pond, and examines it…
An extremely plump baby, who is about a year old and has lovely white skin, comes crawling towards one, dressed in a long gauze robe of violet with the sleeves tucked up.
Duck eggs.
An urn containing the relics of some holy person.
Wild pinks.
Squalid things
The back of a piece of embroidery.
The inside of a cat’s ear.
A swarm of mice, who still have no fur, when they come wriggling out of their nest.
Darkness in a place that does not give the impression of being very clean…
Do please go and find a copy of the Pillow Book and read it: you will find Shōnagon a wonderful companion.  In the meantime, in her honour, here’s a list of my own.  Please feel free to add your own - I would love to see them.
Things that are pleasant to use:
An old fashioned rotary lawnmower: the sort you push along.  And the way the cut grass pours off the blades in green showers.
A rotary egg-whisk: especially the double sort you wind with a handle.
A really sharp pair of scissors, and the crisp snark-snark sound as you cut through cloth.
A ratchet screwdriver: I love the clickety, clockworky sound of the ratchet, and the way each twist of the hand adds to the last.
A good fountain pen freshly filled with black ink: the nib swims over the paper leaving a shining trail and it makes you feel as though what you have written must be good!
A smooth clean block of white paper.
A fresh eraser as soft as a mushroom: the tingling dusty feel under your fingers, and the way it shreds at the corner when you begin to rub out.
Posted by Katherine Langrish at 04:40