Out of interest, the other day, I pulled a list of ‘Children’s Classics’ off Wikipedia.  There are 66 titles, and Aesop’s Fables heads the list with William Caxton’s edition of 1484.  Apart from a couple of pretty obscure titles - at least, I have never heard of ‘A Token for Children’ by James Janeway, and ‘A Pretty Little Pocket Book’ by John Newbery - I can hand on heart say that I encountered most of them during my own childhood.  ‘Robinson Crusoe’?  Tick.  ‘Ivanhoe’?  ‘The Swiss Family Robinson’? ‘The Coral Island’?  Tick.  ‘Journey to the Centre of the Earth’?  ‘Uncle Remus’?  ‘Black Beauty’?  ‘’?  ‘The Happy Prince’? Tick, tick, tick.  And so on.
The list is familiar even though I doubt many of today’s children would consider ‘The Pilgrim’s Progress’, ‘David Copperfield’, or even ‘Twenty Thousand Leagues Under the Sea’ to be tremendously riveting stuff.  Nor were many of them expressly written for children.  But so what?  We were tougher nuts back in my childhood.  I happily gnawed my way through ‘Ivanhoe’ and ‘The Children of the ’.  I expected roughage in my reading, and I got it. 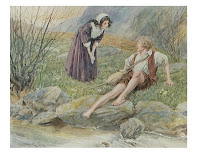 Even though the last book on the list was published in 1918, many – in fact most – of these titles formed part of my reading a full half century later, as a child growing up in the sixties. I can’t say I consciously noticed the absence of strong female characters, since naturally I identified with the hero, whoever he might be.  I swam lagoons with Jack, Ralph and Peterkin, roistered and swashbuckled with D’Artagnan, escaped across the heather with Alan Breck, roamed the jungle with Mowgli – but I did notice the rare occasions when a feisty heroine was presented to me.  This, I think, is why so many of us loved – loved – Katy Carr, Jo March and Anne of Green Gables.  We were resigned to girly girls in books.  We were used to them needing to be rescued, and swooning on manly breasts (Lorna Doone).  Or being sweetly domestic, decorative, helpless and good.  (David Copperfield’s Dora.)  Or ill-treated victims (Sara Crewe).  Or simply not there at all. It was a literary world in which boys were allowed to be Peter Pan but girls were condemned to be Wendy.
So we were thrilled when Katy lost her temper, disobeyed her aunt and swung in that swing; and all the Victorian business of being an invalid and becoming the heart of the family hardly seemed to count in comparison.  Some of Susan Coolidge's writing is still extremely funny, and you can sense her delighting in her heroine's realistically child-like outbursts.  Here's Katy inventing a break-time game:
…Katy’s unlucky star put it into her head to invent a new game, which she called the Game of Rivers.  It was played in the following manner: - each girl took the name of a river and laid out for herself an appointed path through the room, winding among the desks and benches, and making a low roaring sound, to imitate the noise of water.  Cecy was the Plate; Marianne Brooks, a tall girl, the ; Alice Blair, the ; Clover, the Penobscot, and so on.  They were instructed to run into each other once in a while because, as Katy said, ‘rivers do’.  As for Katy herself, she was ‘’, and, growling horribly, raged up and down the platform where Mrs Knight usually sat.  Every now and then… she would suddenly cry out, ‘Now for a meeting of the waters!’ whereupon all the rivers bouncing, bounding, scrambling, screaming, would turn and run towards Father Ocean, while he roared louder than all of them put together, and made short rushes up and down, to represent the movement of waves on a beach.

Of course they get into trouble, but anyone can see it would be worth it to have such fun.  And Jo March, too, could lose her temper, and acted – in boots! – and wrote stories, and did things.  Mary in ‘The Secret Garden’ is angry – very angry – for a lot of the time.  Even transplanted Heidi yearns for her Alp and her grumpy grandfather, and eventually gets her way.  While as for Anne – impulsive, rebellious, outspoken Anne –
“How dare you call me skinny and ugly?  How dare you say I’m freckled and red-headed?  How would you like to have such things said about you?  How would you like to be told that you are fat and clumsy and probably hadn’t a spark of imagination in you?  I don’t care if I do hurt your feelings by saying so!  I hope I hurt them.  You have hurt mine worse than they were ever hurt before even by Mrs Thomas’s intoxicated husband.  And I’ll never forgive you for it, never, never!”
Such girls seemed to be going places.  The trouble was that there wasn’t really anyplace for them to go.  I don’t know why the imaginations of the women who created them could come up with so few goals in an era that was producing strong women by the bucketload: in the States, the early suffragists like Susan B. Anthony and Elizabeth Cady Stanton; in Britain reformers like Florence Nightingale, Josephine Butler, the Pankhursts. But it was an era where perhaps to be a little girl was to have more freedom of behaviour than a grown woman.  Anne of Green Gables becomes Anne of Ingleside, a teacher, marries Gilbert Blythe and has children.  Jo marries Professor Bhaer not Laurie (this we could hardly forgive, though it may be more realistic!); she does become a writer, but then goes all matriarchal and nurturing and 'womanly'.  Katy travels to and marries a young naval officer who is attracted to her because of her – wait for it – selfless nursing skills.
So the vigorous rushing rivers of Katy’s game end up flowing decorously into the great calm land-locked sea of wife-and-motherhood.  Still, at least these books gave some expression, some release, some validity to the passion and energy of growing girls.  Nowadays we take it for granted.  My own daughters have never been interested in Little Women or Anne of Green Gables.  They don’t find Jo an exciting rebel but a prissy homebody taking covered baskets of Christmas dinner to the poor, selflessly selling her hair. (Her hair?  What?  Why?)

In Enid Blyton’s ‘Famous Five’, how I and my schoolfriends identified with the tomboy George, who cut her curly hair, wore shorts, owned a dog, told the truth at all costs and was brave and passionate.  How much better she was than sissy Anne (who wore a plaid skirt and a hairslide)!  And yet, and yet – that cry of hers, “I’m as good as a boy any day” – is the very mark of inequality.  Why should a girl have to masquerade as a boy to be taken seriously?  Why should bravery, independence and action be seen as masculine qualities?
We shouldn’t be complacent.  I can think of plenty of independent, strong heroines in modern children’s fiction – Joan Aiken’s Dido Twite would come top of my personal list, in books like ‘Night Birds on Nantucket’ and ‘The Cuckoo Tree’; and Harriet of ‘Harriet the Spy’; Lyra in ‘The Golden Compass', the gallant Sabriel of Garth Nix's 'Sabriel' . These girls aren’t trying to prove that they are as good as or better than boys.  They simply get on with life and grapple with its problems. My own books have so far figured boy and girl main characters of equal rank.  Hilde in the Troll books is much more confident and outgoing than diffident, self-doubting Peer, while Nest, heroine of ‘Dark Angels’/’The Shadow Hunt’ is at least equal to the young hero Wolf in passion and poise.  But there are still many books for teenagers in which the heroines need – rely on – yearn for – the strong arms and love of some idealised boy. ‘Twilight’ springs instantly to mind. Compare Bella to Katy Carr or Jo March - it's hard to imagine either of them languishing after 'perfect' Edward.
Of all the girls in all the titles on this list of classic books for children, the most independent of all must be Lewis Carroll’s Alice, who calmly steers her way through the looking glass wonderlands of her own imagination.  does not feel in the least inferior to any male character.   She stands up for herself in her own very feminine way, experimenting, chopping logic, lecturing herself and others, refusing to be snubbed, insulted or put in her place.  At the end of each book, when the world threatens her, she pulls it down about her ears like Samson pulling down the pillars of the temple in .  She is extraordinary – and the creation of a man.  But she is pre-adolescent: what does the world really hold for ‘ when they are jung and easily freudened’?  Carroll’s touches a kind of bedrock: a certainty of self-worth that may be felt by many little girls in stable and happy families – but which is still all too easily lost as the teens commence.
Posted by Katherine Langrish at 03:18