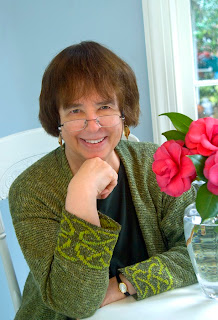 Here is a writer who needs no introduction. Jane Yolen has won umpteen awards, including but not limited to the Caldecott Medal, two Nebula Awards, the World Fantasy Award, three Mythopoeic Awards, the Jewish Book Award, and the World Fantasy Association Lifetime Achievement Award. Her many books (over 300 to date) are on shelves all over the world. Six colleges and universities have given her honorary doctorates. Newsweek has called her ‘the Hans Christian Andersen of America’, and the New York Times proclaimed her ‘a modern equivalent of Aesop’. What can I possibly add to that?

Well, first of all, I want to thank her for responding so generously to my email asking her to consider writing a short piece for Fairytale Reflections. I’m really honoured to welcome her to this blog. Second, as best I can, I’d like to talk a little about a few of those 300 books.

Even if you don’t think you’ve read anything by Jane, you probably have. She’s written everything from picture books for little children, to magical adventures and fairytales for middle-graders, to teenage and adult fantasies, to academic essays. Remember ‘Owl Moon’ (1987) – a gorgeous picture book in which a little girl goes owl-watching on a moonlit night with her father? Or perhaps ‘Touch Magic’ (2000), an impassioned set of essays on the importance of fairytales and folklore in children’s reading? In the introduction to the 1981 edition, Jane writes:

Culture begins in the cradle. Literature is a continuous process from childhood onward, not a body of work sprung full-blown from the heads of adults who never read or were read to as children. …I believe that the continuum of literature is best maintained by those tales of fantasy, fancy, faerie, and the supra-natural, those crafted visions and bits and pieces of dream-remembering that link our past and our future. To do without tales and stories and books is to lose humanity’s past, is to have no star-map for our future.

In response to which, I can only throw my hat in the air and cheer.

Her 1992 novel ‘Briar Rose’, in the Fairy Tale Series created by Terri Windling, is the most powerful retelling of ‘Sleeping Beauty’ that I’ve ever read or am ever likely to read. It’s also a story of the Holocaust.

Each reader will have his or her individual reaction: here, in part, is mine. My first job after I left school at sixteen (I went back to college later, but that’s another story) was as part-time cleaner in an ‘old folks’ home’. The place was a sumptuous 18th century building in the Yorkshire Dales, looking out upon beautiful parkland. However, the roof leaked, the food was poor, and the inhabitants were – in the main – confused and unhappy.

Every time I hoovered the hall, one old lady would come out of her room to beg me, in tears, to phone a home she no longer possessed, so that a husband who’d died years before could take her away. Then there was the autocratic Mrs Thornton who shared a suite with her husband who had Alzheimer’s: she fought for their dignity so fiercely that the staff disliked her, and thought she was ‘putting it on’ when she fell ill. But she wasn’t, and she predeceased him. And the incontinent and prematurely senile woman whose room reeked of urine and whose perennial excuse was that ‘the animals’ came out of the chest of drawers in the night, and it was they who had soiled the room…

It was a place where stories ended. A place where the narratives of lives ran into the sands. A place without hope. It made a great and terrible impression on me, and I swore to myself that never, never should anyone I loved be abandoned to such a place – and yet I know that one does not always have the choice.

In Jane Yolen’s ‘Briar Rose’, as the heroine Becca and her sisters visit the nursing home where their grandmother, Gemma, who always used to tell them the story of the ‘Sleeping Beauty’, is now dying – I felt the chill shock of recognition.

[Becca] bit her lip and silently led them down the hall. Only Mrs Benton was still in her room, crying softly to herself. Becca couldn’t think of a time when she visited that Mrs Benton wasn’t crying, calling out for her mother.

The three sisters pay their uncomfortable final visit, and before she dies, Gemma breathes a secret to Becca. ‘I am Briar Rose,’ she says.

What, then, was the narrative of Gemma’s life? What was her secret history? The clue which Becca must now unravel is in the fairystory which meant so much to Gemma that she told it to her granddaughters over and over again:

Gemma was saying: “… so the king said it was time for a party… A terrifically big party. With cake and ice cream and golden plates. And not to mention invitations sent to all the good fairies in the kingdom.”
“But not the bad fairy.”
Gemma pulled the child closer to her. “Not the bad fairy. Not the one in black with big black boots and silver eagles on her hat.”
“But she came.”
“She came, that angel of death. She came to the party and she said, ‘I curse you, Briar Rose. I curse you and your father the king and your mother the queen and all your uncles and cousins and aunts. And all the people in your village. And all the people who bear your name.’
Gemma shook herself all over, and Becca put her hand on her grandmother’s arm.
“It will be all right, Gemma. You’ll see. The curse doesn’t work.”

Leslie Wilson’s books, of last week’s post, are ‘realistic’ historical novels with hidden fairytale motifs acknowledged as a debt by the author, perhaps barely detectable to the reader. Jane Yolen’s ‘Briar Rose’ is not a fantasy. It is a novel which deals with the most brutal of truths. And yet, it is openly conceived as a fairytale. Read it – you’ll never forget it. And now for Jane’s own words: on rewritten, recreated fairy stories as mirrors – often ‘dark mirrors’ – for our own time.


A number of years ago, folklorist Alan Dundes coined the term “fakelore” to describe stories not from the folk canon but that sounded and tasted  and felt like those stories but were invented whole cloth by writers. Lumping in, I suppose, Madame LePrince du Beaumont and Isak Dinesen with Hans Christian Andersen, Angela Carter, and (gulp) me.
Though of course the perceptive lover of such tales could have pointed out to him how often the best of those stories have already moved back into the folk corner, hiding there for a number of years until they have emerged as—ta!ta!—folk stories.
I don’t like Dundes’ dyad and actually make this distinction: the greatest stories I know whether folklore or fakelore touch on the sacred, that moment when head and heart and soul combine.
My "sacred" may not be yours. We may worship at different altars.
Sacred in story has nothing to do with organized religion or disorganized religion. It has to do with that moment you are reading a story or hearing it from a teller’s mouth, and suddenly the hairs on your arms and the back of your neck rise up. The moment when you and the story ascend a level of humanity and touch the very hem of heaven. Call it the Numinous Effect or the Arm Hair Affirmation or anything else you wish. I call it sacred.
I think what Dundes was getting at, though, had more to do with the fact that a written or art tale carries with it an acknowledgement of personal history.
But wait-- even fairy tales that we so often claim are universal and ageless--carry the thumbprints of their own time. So a social scientist or international lawyer could parse (as happened at a fairy tale conference I once attended at Princeton) the fairy tale punishments in classic European fairy tales, explaining them in terms of the community and era in which each story was told. Thus the witch shoved into the oven in Hansel and Gretel, and the wicked queen in her red hot iron shoes are reflections of the prevailing laws about the burning of witches, and so forth.
That our stories are mirrors of our time, reflecting prevalent prejudices and class hatreds does not surprise any of us. Recent events—the harrowing of so many African states; on-again off-again Afgahistan hunt for Ben Ladin; the Iraq war with its nasty sectarian fighting; the on-going killings of children by children in schools around America; the recent attempted assassination of a congresswoman in Tucson that took the lives of others as collateral damage--all these are relevant to any discussion of moral issues. Yet when a fairy story creates a dark mirror, giving back in a fantastic setting the baser beliefs and feelings and legalities its own day, that often comes as a shock to even the more perspicacious reader (and as a total mystery to those readers who skim along the tops of metaphors.)
But really, fairy tales and folk stories have always been a kind of map which we clutch as we move along the journeys of our lives.
A kind  of map.
But not strictly a map. The tale is obviously not a point-for-point representation of a specific landscape. A real map in the hand, however cleverly drawn, is still a landscape on a single plane. It is specific to an area.
A story--if it is any good at all--charts much more. It encompasses an entire heart's world.
Once Upon  by Jane Yolen  © 2007
Once Upon A Time
there was a Wolf,
but not a Wolf,
an Other,
whose mother
and father were others,
who looked not like us,
Republican or Dem
in other words--
Them.
They were forest dwellers,
child sellers,
meat eaters,
wife beaters,
idol makers
oath breakers—
in other words, Wolf.
So Happy Ever After means
we kill the Wolf,
spill his blood,
knock him out,
bury him in mud,
make him dance
in red hot shoes.
For us to win
The Wolf must lose.