This is the first of an occasional series of 'Folklore Snippets' - little tales which pleased me and I hope will please you.  In honour of the Nis, the good-hearted but hot-tempered and unpredictable little house spirit in my 'troll trilogy' West of the Moon, here is a traditional Danish tale about one. 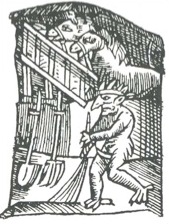 "Light High, Light Low"
From "Scandinavian Folklore" ed. William Craigie 1896
In Tylstrup lies a farm which has a nisse on it. Two ploughmen served there, one of whom was very fond of the nisse, while the other found his greatest delight in annoying him. Once he took away his porridge from him. “You’ll pay for that,” said the nisse, and when the man woke next morning he found that the nisse had placed a harrow over the ridge of the barn, and then laid him upon the sharp spikes.
“You’ll pay for that yet,” thought the man. Some time passed and the other man asked the nisse to sew something for him. It was a bright moonlit night, so the nisse took needle and thread, seated himself on top of the haystack and began to sew. Just as he was hard at work, there came a shadow over the moon, at which the little fellow became impatient and cried. ‘Light! Light high!” The man who teased him, however, was standing down below with a flail in his hand, and when he heard the shout he brought this over the nisse’s legs. Nisse thought it was Our Lord who had thus punished him for his imperious shout, and said very humbly, “Light high, light low, light just as you please, Lord!”

Picture credit: wikipedia: A tomte/nisse by Carta Marina,1539
Posted by Katherine Langrish at 00:43