A Tour Around the Library of Imaginary Books

In Terry Pratchett’s Discworld novels (in case anyone here doesn’t already know), deep in the enclaves of Unseen University is the University Library, where the presence of so many books (not all of them magical) has warped space into a mysterious form called L-space (Library-space) expressed by the equation:

Books are entrances into other worlds: in UU Library this is not a metaphor. And, a consequence of the properties of L-space, the shelves of UU Library contain every book ever written, unwritten or yet to be written.

I would like, then (if I have the Librarian’s permission), to take you on a small tour of a favourite section of mine: the section for Imaginary Books - that is, books which exist only within the covers of other books and are therefore fictional to the power two: fiction². I’ve delighted in many such titles over the years, so let’s tiptoe past the chained, uneasily-slumbering grimoires of UU Library’s extensive magical sections, and I’ll show you my favourites.

The first is ‘The Orange and the Apple’, which exists between the covers of Arthur C Clarke’s ‘A Fall of Moondust’, the story of a ‘moon-bus’ full of passengers which plunges into the deep soft dust of the Sea of Tranquillity following a moon-quake. During the desperate rescue operation which ensues, the trapped passengers organise an entertainment to keep their minds off claustrophobia and the fear of death. It may not be one of Clarke’s best known novels, but it contains some of his best character sketches, and is often very funny. The passengers take turns reading aloud the only two novels on board, Jack Schaefer’s classic western ‘Shane’ and a ‘new historical romance’ ‘The Orange and the Apple’, featuring an affair between Sir Isaac Newton and Nell Gwynne. Let me reach it down from the shelf for you: a cheap paperback with a lurid cover and a cracked spine…

The author certainly wasted no time. Within three pages, Sir Isaac Newton was explaining the law of gravitation to Mistress Gwynne, who had already hinted that she would like to do something in return.


…“Forsooth, Sir Isaac, you are indeed a man of great knowledge. Yet, methinks, there is much that a woman might teach you.”
“And what is that, my pretty maid?”
Mistress Nell blushed shyly.
“I fear,” she sighed, “that you have given your life to the things of the mind. You have forgotten, Sir Isaac, that the body, also, has much strange wisdom.”
“Call me ‘Ike’,” said the sage huskily, as his clumsy fingers tugged at the fastenings of her blouse.

Close beside this on the shelves is an array of titles from Douglas Adams’ ‘The Hitchhiker’s Guide to the Galaxy’. There’s the Guide itself, of course, clearly an e-book on an e-reader:

…a device which looked rather like a largish electronic calculator. This had about a hundred tiny press buttons and a screen about four inches square on which any one of a million ‘pages’ could be summoned at a moment’s notice. It looked insanely complicated, and this was one of the reasons why the snug plastic cover it fitted into had the words DON’T PANIC printed on it in large friendly letters. 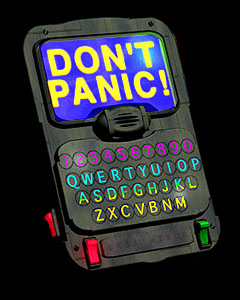 That was written in the late 1970’s, so you can see the power of L-space right there. Perhaps the large friendly letters should be added to Kindles? Next to the Guide is an entire bookcase sagging under the weight of the many volumes of the Encyclopaedia Galactica. Oh, and here are a couple of paperbacks which look to have been much thumbed by the wizards of Unseen University - so long as they’re sure no other wizard is watching: Eccentrica Gallumbits’ ‘The Big Bang Theory, A Personal View’, and ‘Everything You Never Wanted to Know About Sex But Have Been Forced To Find Out’. Next on the shelf - in a far more pristine condition - is Oolon Colluphid’s galaxy-rattling series of popular theological texts: ‘Where God Went Wrong’, ‘Some More of God’s Greatest Mistakes’, ‘Who Is This God Person Anyway?’ and ‘Well That About Wraps It Up For God’.

If you’re not interested in science, or philosophy, we can move on to the literary biographies.  Here's one I’ve always wanted to read: ‘Pard-Spirit: A Study of Branwell Brontë’ by one Mr Mybug - nestling within the pages of Stella Gibbons’ ‘Cold Comfort Farm’. It’s a handsome looking hardback. I suspect he had to pay for its publication, but he made sure there was a large black and white photograph of himself on the back of the dust jacket.

‘It’s goin’ to be dam good,’ said Mr Mybug. ‘It’s a psychological study, of course, and I’ve got a lot of new matter, including three letters he wrote to an old aunt in Ireland, Mrs Prunty, during the period when he was working on Wuthering Heights.’ He glanced sharply at Flora to see if she would react.


‘It’s obvious that it’s his book and not Emily’s. No woman could have written that. It’s male stuff… Secretly, he worked twelve hours a day writing Shirley and Villette - and of course, Wuthering Heights. I’ve proved all this by evidence from the three letters to old Mrs Prunty.  His letters to her are little masterpieces of repressed passion. They’re full of tender little questions… he asks her how is her rheumatism… has her cat, Toby, “recovered from the fever”… … how is Cousin Martha (and what a picture we get of Cousin Martha in those simple words, a raw Irish chit, high-cheekboned, with limp black hair and clear blood in her lips!) …’

Delicious! Then, sticking out quite a lot and leaning slantwise to fit the shelf, is a tall folio manuscript, bound in a red leather cover, written 'in a wandering hand' in spiky black ink with lots of curlicues. The catalogue label coming unstuck from the spine reads: 'Travel: Imaginary'.  I pull it tenderly out.  Odd though it seems, this may be the most valuable book in the entire section. 'The title page has many titles on it, crossed out one after another: so:

My Diary.  My Unexpected Journey. There and Back Again.  And What Happened After.  Adventures of Five Hobbits. The Tale of the Great Ring, complied by Bilbo Baggins from his own observations and those of his friends. What We Did in the War of the Ring.

Here Bilbo's hand ends, and Frodo has written:
THE DOWNFALL OF THE LORD OF THE RINGS AND THE RETURN OF THE KING'.

Bilbo and Frodo's own autobiographical account!  I can see you'd love to stand here and leaf through it, but today I'm just showing you what's on the shelves, and we haven't time.  You can come back by yourself another day.

So do you fancy Victorian poetry? Courtesy of A S Byatt’s ‘Possession’, allow me to pull out this stout green book, the ‘Collected Poems of Randolph Henry Ash’ including of course ‘The Garden of Proserpina’ and ‘Ask to Embla’ -

Or (my own preference), this slim volume in limp violet suede, with faded spine and curling corners, whose embossed gold title reads simply ‘The Fairy Melusine’ by Christabel LaMotte. As we pluck it from the shelf, out flutters a loose manuscript poem:

Now - is there anything you'd like to see that I haven't shown you?  It'll be here.  Just let me know...