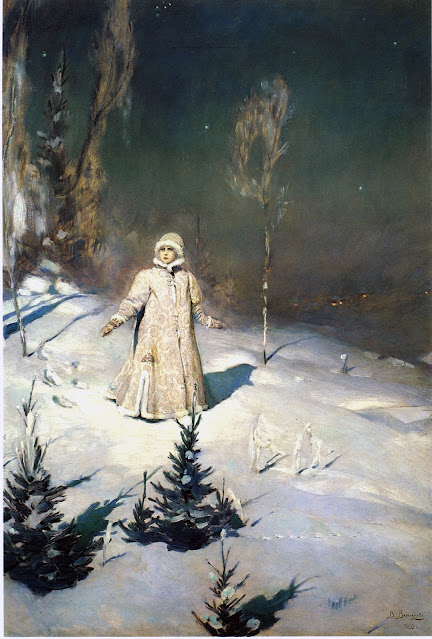 When I was a child, I had a book called Fairy Tales of Many Lands, edited by H. Herda and published by Franklin Watts in 1956. It’s sitting by my desk as I type, its disintegrating cover patched by my mother, some time in the early 60’s, with lavender and blue flowered Contac paper. It was originally published in German, which explains the extremely idiosyncratic choice of tales (“The Good Shepherd”? “The Gnome’s Advice”? “The Enchanted Hill?”), the unfamiliar artists (Gerhard Grossman? Hilde Koeppen? Ursula Wendorff-Weidt?), and the stiff, translated prose. In any case, I pored over its strange tales and sketchy wash illustrations with the single-hearted obsession of a child in love with a book. There’s not a single story in there that hasn’t influenced me in some way or another, including the ones I hated (“The Weathercock” and “The Wonderful Coffee Mill,” if you’re curious). But the one that really got me where I lived was a Russian folk tale called “The Snow Child.

It’s not a well-known story, so here’s a summary:

A childless couple celebrate the first snowfall of winter by sculpting a snow baby. A stranger walks by, and the snow baby stretches, laughs, and becomes a perfect, pale baby girl with blue eyes and hair like starlight. The couple, delighted, take her home, put her in their empty cradle, and call her Snowflake.
Snowflake grows quickly into a beautiful, good, obedient, merry child, who helps her mother around the house and is beloved by everyone who sees her. All winter she laughs and plays with the village children, but when the spring comes, she turns pale and quiet and takes to hiding in shady corners. Come midsummer, she agrees to go out into the woods to celebrate with her friends. But when they press her to leap over the midsummer bonfire, she slips away into the woods and heads towards the mountains to the north.
When Snowflake fails to return from the bonfire with the other children, the distracted parents search the forest until the village wise woman tells them to stop. Their daughter was the gift of King Winter, who has undoubtedly taken her back into his frozen kingdom. They should be grateful for the gift and stop mourning.
In the meantime, Snowflake journeys through the woods, having adventures with a pair of lost bear cubs, turning down an offer to be Queen of a pond of musical Frogs, and sleeping under an oak tree, watched over by kindly giants, squirrels, and dwarves. She reunites the cubs with their mother and begs a ride from a skeptical eagle, who carries her to his eyrie. That night, King Winter appears to tell her that she is a snow child, whose real home is a crystal palace behind the moon. He will take her there, but first she must return to her parents and tell them goodbye. A flurry of snowflakes carries her back to her village, where she appears to her parents and tells them to be glad for her because she’s going home. Then the sun rises and she melts and rises as a cloud to heaven.

It is, of course, a fable about children dying, right on up there with the death of Little Nell in its sentimental piety. The oldest versions, referenced in the scholarly literature as tale-type 703, end at the midsummer bonfire, with the snow maiden giving into peer pressure and evaporating up to heaven, leaving everyone to wonder what has become of her. Another variant has her growing up, falling in love, and melting from the heat of her sweetheart’s first kiss.

This Snowflake may be a compendium of Victorian virtues, but she’s anything but passive. And she’s got a strong sense of self-preservation as well as a good heart. She runs away from the fire—and the insensitive children who are pressuring her to jump it. She knows how to catch trout with her bare hands and get honey from a hive. She’s polite to frogs and wolves alike and she isn’t afraid of flying over ravines and gullies on an eagle’s back. She’s not afraid to die.

There’s a reason that the spine of Fairy Tales from Many Lands is broken at the illustration of Snowflake in the eagle’s nest, looking longingly at the moon. As a child, I was asthmatic, at a time when the treatment for asthma was pretty much a hot humidifier and Vicks Vaporub for mild attacks, and the hospital, an oxygen tent, and prayer for more severe ones. Every time I couldn’t breathe, I was sure I was going to die. And even though I was all too obviously not good, obedient, pious, industrious, or beloved by all who beheld me, I found hope in Snowflake’s after-evaporation reunion with her brother and sister snowflakes.

The comfort I found in Snowflake’s death is why I’m so appalled by the 20th Century’s cultural redefinition of fairy tales as simplistic, sanitized, happily-ever-after stories of heterosexual romance for children. Yes, Fairy Tales of Many Lands was published for children, and I can’t read it now without wincing at the slightly twee tone of the prose (“Does this child really want to go up to the sky, this bewitching little child whom no one can resist?”). And yet the stories confront the bitter side of human relations as well as the sweet, and the protagonists triumph over bandits and malicious friends as well as giants and dragons. With few exceptions, the girls in these stories are as active and clever as the boys, and their rewards are not restricted to marriage.

Reading the story now, it seems odd to me that I identified so strongly with Snowflake. Where she revived in the cold, I withered and wheezed. Where she was slender and dainty and blonde, I was plump and bespectacled and mousy brown. I was too allergic to animals to have a pet, let alone romp with bears, and couldn’t even play outside at recess, let alone go adventuring in the woods. I was afraid of heights. And my parents, while they loved me, did not approach the standards set by old Ivan and Maria. Yet her story was, on one level, mine. We were both children adopted by much older parents when we were babies, we were only children, and we were the gift of a stranger. Neither of us fit the norms of the world we’d been brought into. Both of us longed for a home we could hardly imagine, among people who not only loved us, but knew and accepted us for what we were.

Snowflake had to evaporate to find her home. I only had to grow up.

As an author, I have retold “The Snow Child” only once, in a story called “The Printer’s Daughter,” written for the Windling/Datlow fairy tale anthology Ruby Slippers, Golden Tears. My chance-child is made of paper, not snow, and her adventures take place in the wilderness of Elizabethan London rather than in a Russian forest. Frisket is a post-modern heroine, fully conscious that she’s not human, always longing to go back to paper and ink. Which she does, in the end, with the help of a scruffy poet. It’s one of my favorite pieces of my own fiction, drawing on all the Elizabethan prose I read for my degree in Renaissance studies as well as on “The Snow Child.” But it’s not the only piece of fiction that story has touched. Almost everything I write has got a foundling in it somewhere, a child out of place or out of time, raised and loved by those who have no blood kinship with it. Like Snowflake, each of these foundlings is and is not me, their stories rooted in mine and branching from it, like tributaries from the river that is my drive to write.


Delia Sherman writes historical/folklore/semi-comic fairy stories with a serious twist.  Her short fiction and poetry has appeared in many anthologies.  Her adult novels are 'Through a Brazen Mirror' and 'The Porcelain Dove' (which won the Mythopoeic Award) and, with fellow-fantasist Ellen Kushner, 'The Fall of Kings'.  She has also written two wonderful novels for younger children, 'Changeling' and 'The Magic Mirror of the Mermaid Queen', featuring impetuous, warm-hearted Neef, the official changeling of New York's Central Park. "Kind of bi-cultural, human and faery", Neef is always getting into scrapes - as you might expect when the Wild Hunt howls on autumn nights in Central Park, fox spirits and moss women live in the woods, and the odd Fictional Character such as the Water Rat or Stuart Little may be found down by the lake.
Delia is an active member of the Endicott Studio of Mythic Arts and a founding member of the board of the Interstitial Arts Foundation, dedicated to art found  in between genres and crossing boundaries.  She lives – where else? – in New York City with Ellen Kushner, travels whenever she gets the chance and writes wherever she happens to be.  Her latest book is The Freedom Maze, about a supposedly white child magically transported to the time of her ancestors who were slave-owners and slaves in the old South.


Picture Credits:
The Snow Child by Victor Vasetnov
The Snow Maiden by A Vedernikov
Black and white photographs of snowflakes by Wilson Bentley (1865-1931)
Posted by Katherine Langrish at 00:33