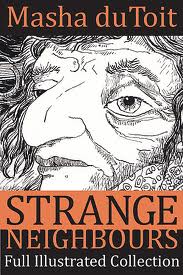 Strange Neighbours is a collection of ten illustrated fantasy short stories set in Cape Town, South Africa.  Meet a hitch hiking troll with a taste for pepper-spray and a homeless witch with a trolley full of secrets. Discover a book hoarding mermaid and a fridge full of frogs. And learn how to greet a witch – politely, of course.

Now here's a lovely and unusual collection.  Masha du Toit is a South African artist and writer, who has written and illustrated an e-book of delicate fantasy stories for adults (though there is nothing actually unsuitable for younger readers, these are not aimed at children) called 'Strange Neighbours'.  In them, quiet, ordinary people come face to face with all kinds of weird situations - and often behave with inspiring humanity and aplomb.

In 'In the Backyard' a young man who's inherited a small house begins to wonder why the back door has been so very securely locked and barred 'like Fort Knox', when all that's out there is a weedy yard and a broken manhole cover.  And why is the shed so full of various poisons and traps?

'Kelp' is a moving tale about a lonely young woman who comes to visit the seaside in Cape Town, falls ill and is helped in by an old woman who scratches a living selling old books and magazines, and who lives in a shack under the pier.  But there's something very strange and sad about her...

Aletta drifted in and out of consciousness.  A small paraffin lamp glowed in a corner.  The sea made deep sounds beyond the walls. Then she had to sit up and clutch at a glass and drink bitter liquid.

She woke, or dreamed she woke, in the dark.

Sea air breathed over her, cold and wet.  A gap had opened in the wall opposite her bed. Something moved there.  A figure, barely visible in glints of dim light. Something like a scarf was wrapped about its neck. Long fringes stirred against its shoulders.  Then it ducked down and stepped through into the night beyond.  The dream darkened and sucked Aletta back  into sleep.


In 'The Ink Witch' an ostracised schoolgirl - who may have strange powers - appears to deal with her chief tormentor in a decisive and final way - and even if it's all only 'strong imagination', the story is a warning to those who crush the imagination and teach their victims to hate.   In 'Troll Patrol' a woman driver helps a very unusual fugitive to escape the police.  And in 'In The Oven' a young girl visits her grandmother and bakes gingerbread men which come to life in the oven.  Trying to save them, she drops one:

The man had lost a leg now, but it was still alive, twitching sideways along the floor.  Why couldn't he just lie there in his baking tray like he was supposed to?  Now he'd made her hurt him.  Maybe she could put its leg back on.  But it was quite crushed, just a little pile of doughy crumbs.  The man flipped himself over and lay on his back.

She knew what she had to do.  It was like that time she had found a baby bird that had fallen out of its nest...

There are more.  I enjoyed every one of them.  Whilst recognizing and acknowledging cruelty and pain, these sour-sweet stories offer hope and refuse to despair.  You can buy the e-book if you click on this link:  Strange Neighbours  and visit Masha's website to find out more about her writing and see more of her beautiful art.


Masha du Toit is an artist and writer living in Cape Town, South Africa. She illustrates stories that don't exist yet, and writes about unexpected magic in every-day situations. She’s inspired by folk- and fairy tales, puppetry, and spur-of-the-moment bed time stories. She’s about to publish a full length e-book “The Story Trap”.
All pictures copyright Masha du Toit
Posted by Katherine Langrish at 00:05