Folklore Snippets - The Grav-so or Ghoul 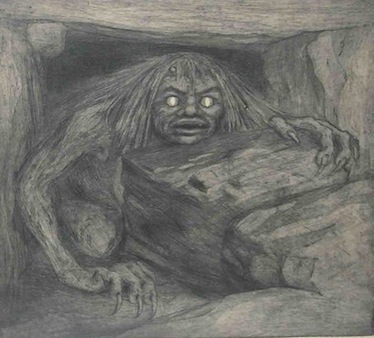 From "Scandinavian Folklore" ed William Craigie
This monster is properly a treasure-watcher, and lies and broods over heaps of gold.  For the most part it has its dwelling in mounds, where a light is seen burning at by night, and it is known then that the treasure lies there.  If anyone digs for it, he may always be certain of meeting a ghoul, and that is hard to deal with.  Its back is as sharp as a knife, and it is seldom that anyone escapes from it alive.  As soon as anyone begins to dig in the mound, it comes out and says, “What are you doing there?”  The treasure hunter must answer, “I want to get a little money, and it’s that I am digging for, if you won’t be angry.”  With this the ghoul must content itself, and they make a bargain.  “If you are finished,” it says, “when I come for the third time, then all you find is yours, but if you are not finished by then, I shall spring upon you and destroy you.”
If the man has courage to make this compact, he must lose no time, for if the ghoul comes for the third time before he has finished, it runs between his legs and splits him in two with its sharp back. Old Peter Smith in Taaderup, who is now dead, had the reputation for having got his wealth in this fashion: he and another young fellow were desirous of digging for treasure, and went one night to a mound where they knew that there was a ghoul.  When they began to dig, it came up and asked what they wanted, and then fixed a certain time within which they were to be finished.  They worked now with all their might, and finally got hold of a big chest which they dragged out as fast as they could, but before they had got quite clear of the mound - Peter Smith still had one of his legs in the hole - the ghoul came for the third time and managed to rub itself against Peter’s legs.  Although it only touched him slightly, he had got enough for all his life, for however wealthy he was, his legs were always so feeble he could neither stand nor walk.
Picture credit:
Troll or ghoul by  Ernst Koie (1872 - 1960)

Posted by Katherine Langrish at 01:17