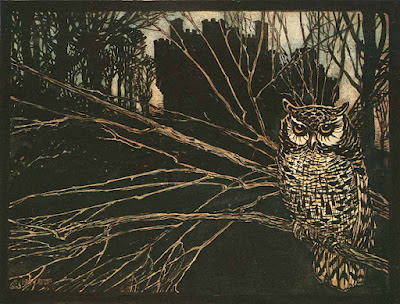 I was reminded by Celia Rees’s post on Blodeuedd, the girl who was changed into an owl, of this haunting fairytale collected by the Brothers Grimm, which I first read many, many years ago. It’s stayed with me ever since. It isn’t well known – perhaps because although it’s strong on emotional intensity, it’s short on plot. But first, here’s the story.

It tells of a castle in the middle of a dark and thick forest, inhabited by a single old woman who turns herself into the shape of a cat or screech-owl by day, assuming her own form only at night. She lures wild birds and beast to her, and kills and eats them.

If anyone came within one hundred paces of the castle he was obliged to stand still and could not stir from the spot until she bade him be free. But whenever an innocent maiden came within this circle, she changed her into a bird and shut her up in a wickerwork cage, and carried the cage into a room in the castle. She had about seven thousand cages of rare birds in the castle.”

A young maiden called Jorinda is betrothed to a youth called Joringel, and in order to be alone together, the pair of them take a walk into the forest. Joringel warns Jorinda to take care: they must not stray too near the castle.

It was a beautiful evening. The sun shone brightly between the trunks of the trees into the dark green of the forest, and the turtledoves sang mournfully upon the beech trees,

but for some reason the young lovers – for whom everything should be wonderful - are sorrowful.

Jorinda wept now and then: she sat down in the sunshine and was sorrowful. Joringel was sorrowful too; they were as sad as though they were about to die. Then they looked around them, and were quite at a loss, for they did not know which way they should go home. The sun was still half above the mountain and half under.


Joringel looked through the bushes, and saw the old walls of the castle close at hand.
He was horror-stricken and full of deadly fear. Jorinda was singing:

Frozen to the spot and unable to speak or move, Joringel sees the owl fly into a thicket and immediately afterwards a crooked old woman ‘with large red eyes’ emerges, catches the nightingale and takes it away. She returns later and releases Joringel with the strange words, ‘If the moon shines on the cage, Zachiel, let him loose,’ but she refuses to release Jorinda, saying Joringel will never see her again.

Joringel does finally manage to release Jorinda with the aid of a magical blood-red flower containing a dew-drop as big as a pearl, with which he touches the doors of the castle and the cage itself and sets Jorinda and all the other maidens free; the sexual imagery is clear enough, and the happy ending is satisfactory if perfunctory; what is really memorable is the sorrowful beauty of the forest, the sadness of the lovers, the imagery of the birds, and the strange song Jorinda sings.

What’s it all about? Not always a useful question. A fairytale should be read like a poem, or attended to in the same kind of way as we attend to music, allowing it to work directly on the emotions. For me, this tale strikes strange chords from the heartstrings. I might hazard a guess that the lovers are sad because they know they’ll grow old and die, that evening is here and the day nearly over, because their young love may not last and the sun is already half beneath the mountain. Perhaps they’re afraid of mortality, the grave, symbolised by the grim stone walls of the castle whose shadow immobilises them, and the old owl-woman whose voice is a lament.

Years ago in my early twenties I was walking through London with a girl friend. We were laughing and chattering, and a middle-aged woman passing by – she may have been elderly, but I think she was only middle-aged – leaned over and said in a low voice but with extraordinary venom, “One day you’ll be like me.” As a memento mori, it was quite something, and my friend shuddered, but we agreed later that we never would be like her. We would never, ever be that bitter.

Nevertheless, everyone recognises the fear and dread associated with thoughts of old age and death, and the loss of youth and beauty; and happy are those of us who can throw it off with no more than a brief shiver. For me this fairytale takes those dark emotions and transmutes them into something beautiful.