"This Is Not Forgiveness" by Celia Rees

A warm welcome to Celia Rees, back on 'Steel Thistles' as part of the tour for her new book 'This Is Not Forgiveness' (Bloomsbury).  Celia is not only a friend but a writer whose work I greatly admire - not least for the way she's always setting herself new challenges.  Her last book, which I reviewed here, was a rethinking of Shakespeare's 'Twelfth Night'.  This one is completely up-to-date.  Twenty-first century Britain, warts and all. 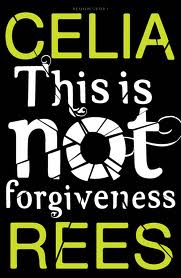 I went to the funerals. They held them one after another. I don’t think they meant them to be that way, but the crematorium was busy that day. Yours was second. Not much like the first. No orations, no weeping schoolmates clutching single blossoms to put on the coffin…No inky hand-printed notes on the flowers: R.I.P., C U in Heaven, Gone but not forgotten. No flowers at all. Hardly anyone there either. Only the bare minimum for decency. Police and immediate family. Some of your mates, but not many. Just Bryn and a few others, wearing uniform…


This is not forgiveness. Don’t think that.


Over the course of one hot summer, three young people’s lives come together and trigger a chain reaction of dangerous events. There’s Jamie, ready to fall in love, looking for his first sexual experience. There’s Jamie’s older brother Rob, a soldier invalided out of Afghanistan, macho, secretive, cynical and used to violence. And there’s beautiful, complex, sexually magnetic Caro, who enjoys a spice of danger, who flirts with extremism, and who sleeps around – the kind of girl other girls dislike.

Jamie can hardly believe it when Caro begins sleeping with him. He tries hard to keep up – she’s capricious, always springing surprises. But Caro is keeping more than one secret from him, and gradually Jamie begins to realise that his brother Rob knows Caro better than he’d guessed. Much better. And Caro and Rob are planning something which will end more terribly than even Caro ever imagined…

"This Is Not Forgiveness" is of course a fast-moving thriller – that goes without saying – but what I really loved about the book was the way Celia Rees writes about young people on the verge of growing up – some of them already damaged - desperate for experience, full of hope and full of cynicism. Jamie, getting ready to go out for the evening – ‘Having a shower and a shave, getting my hair right, picking out clothes’ – all of course in the hope that he’s going to meet Her:

The day is tipping towards evening, the blue sky darkening, the streetlights coming on. It’s warm. There are kids out playing on the front lawns, and the barbecues are on the go again. We walk quickly. I wave away the half bottle of vodka Cal takes from his pocket. I need to keep sharp. I don’t want to get wasted in case I run into Caro.

I love that picture of the boys’ sense of separateness from the world around them – their distance from the children they so recently were, the parental barbecues they would so recently have attended. Nothing to do with them now! Now they’re young wolves, alone as only teenagers can be alone together. And of course, Jamie's evening runs its inevitable course from hope (anything is possible), through partial success (getting into a cool bar but only because the bouncer knows his brother), to isolation (not knowing anyone,not even having the nerve to talk to Caro when he sees her), aggression (when his brother picks a quarrel first with him and then with a stranger), and the final irony of getting together with Caro only because she needs help getting his drunken brother home over ‘pavements slippery with vomit, the road glittery with glass, gutters strewn with kebab boxes spilling strips of discarded salad.’ This is telling it how it is.

But there’s also a tenderness to Celia Rees’s writing. She never forgets how young her characters are, how vulnerable, how much they’re testing themselves, trying to find out who they really are, and what might make life worth living. When Caro takes Jamie up a hill to see the full moon, her voice is authentically young, I think – talking solemn bullshit as if no one has ever done it before:

“I love it up here. … I love high places.” She comes back to me and sits opposite, arms clasped around her bare legs. “This place is special, do you know that? I come here as often as I can. Different times of day. Sometimes in the very early morning. I come to catch the sun rising, or in the evening to see it set. I’ve been taking photographs, trying to capture the moment of transition, night to day, day to night. I like margins. It’s different depending on the time of day, time of year. It can be weird, spooky here, especially in fog or mist, or when the clouds come down. You see things…”

If she were older it would sound pretentious: young as she is, it’s completely natural. It makes me like her. (And of course the boy is impressed…)

Do read the book – it’s not only wonderful, it’s also explosively exciting.   On Wednesday I’ll be asking Celia some questions about ‘This Is Not Forgiveness’ – and on Friday she’ll be talking about a fairytale which reflects one of the fundamental motifs of the book – the destructive trio of lovers.


"This Is Not Forgiveness" is published by Bloomsbury, £6.99
Posted by Katherine Langrish at 00:59

Email ThisBlogThis!Share to TwitterShare to FacebookShare to Pinterest
Labels: Celia Rees, Katherine Langrish, This Is Not Forgiveness, YA thrillers