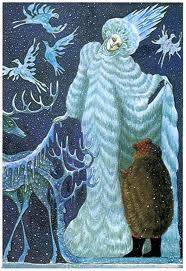 Hans Christian Andersen’s “The Snow Queen” has haunted me all my life, so I was delighted when Kath gave me an excuse to revisit this one. It’s a fairly complex fairytale, with its story of Kai who gets a splinter of the devil’s mirror in his eye, rejects his sweetheart Gerda, and runs away with the Snow Queen. But like all the old tales, there are layers of meaning hidden under the story too. I think that’s what makes them endure over the years, so I hope you’ll be interested in my personal interpretation.

As a little girl I enjoyed the story mostly for its adventure and magic. Living in the southwest of England, Torbay in Devon, where we seldom see snow even in the coldest winters, I also liked the otherworldly beauty of the snowy mountains and the enchantment of the Snow Queen’s ice palace – see, I was a budding fantasy writer even then! I remember the book I owned as a child (now sadly lost) had a beautiful full-colour picture of the Snow Queen dressed in white fur, driving her sleigh pulled by prancing white horses with silver bells on their harness through the Northern Lights across a winter’s sky. Being pony crazy, I think it was probably these horses that drew me to the story initially. I never much liked later versions where the horses were replaced by reindeer or swans, or – as in the DVD version I have starring Bridget Fonda – an engine! Talk about destroying the magic… 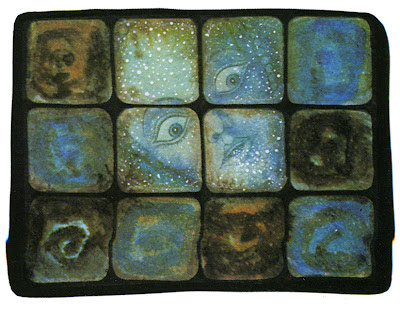 But back to the story. As soon as I discovered that in this fairytale it is the boy – Kai – who gets kidnapped, and the girl – Gerda – who sets out on a quest to rescue him, I was hooked. After all those sugary little princess stories, here was a true heroine setting out on her own adventures! (I was Gerda, of course.) My memory of the actual adventures Gerda had on her quest is hazy, and I know these are often edited for simplicity, so maybe that’s why. The version of the tale I re-read for this post has Gerda encountering a witch living in a cottage in the woods who tries to keep her as her own little girl, then a princess with a long line of suitors seeking her hand who tries to marry her off, followed by a robber girl who supplies her with a reindeer, and finally two old women – a Lapp and a Finn – living alone in the snow, who feed and warm Gerda on her journey. The DVD version leaves out the Lapp and Finn women entirely, linking each of Gerda’s encounters to a different season so that she journeys through spring, summer, and autumn to find winter and the Snow Queen. I don’t think the details really matter. However, I do think that, on a deeper level, Gerda’s quest represents the stages of womanhood she will travel through in the world and perhaps that’s why this fairytale speaks to me so strongly.

This is how I see Gerda’s journey:

Spring – In the witch’s cottage, Gerda is cared for and allowed to play in the garden but is forbidden to step outside the gate into the dangerous wood. The witch banishes all the roses that might remind her of Kai and does everything she can to keep the little girl from continuing her quest. Having a clingy mother myself, I can identify only too well with this stage. Even now, my mother seems unable to accept that I might want to open that gate and have adventures of my own in the big wide world. 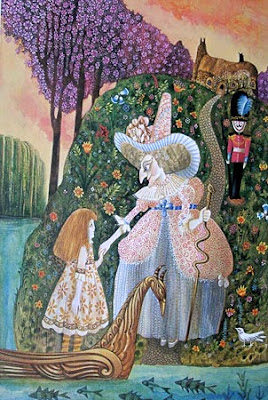 Summer – At the Princess’ palace, Gerda at first thinks Kai is the prince, and is disappointed when he turns out to be a stranger. In my DVD version a line of charming suitors try to win her hand, but Gerda rejects them all and escapes. This season represents the young and fertile woman chased by boys and making herself beautiful for them. It seems summer will last forever, with its dances and its roses and its declarations of love. But it is over all too soon. 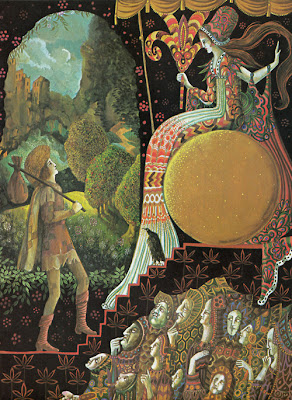 Autumn – Here, I see the robber girl and her bandit mother representing the menopause, when a woman has finished with being a wife and mother and is beginning to find her own way in the world, coming into her power. It might be the autumn of her life, but autumn is a period of fruitfulness and harvest where the seeds sown in spring that blossomed in summer are ripening. Here, Gerda finds strength she didn’t know she had and escapes by riding the robber girl’s reindeer. 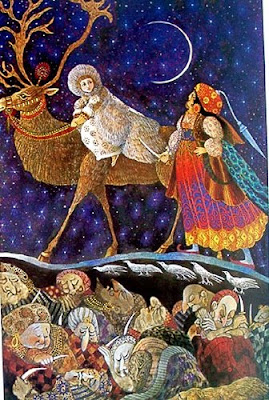 Winter – The Finn and Lapp women, living alone in their modest, cosy houses isolated in the snow, represent old age. They help Gerda, but warn her that if she chooses to continue her quest she must leave the reindeer and go on alone. This last part of her journey represents death, which everyone must face alone.

Finally, Gerda reaches the Snow Queen’s palace, where she finds Kai trying to form a word out of shards of ice. The word is LOVE, but Kai’s heart has been turned to ice by the Snow Queen’s kiss, and the splinter of the devil’s mirror in his eye means he cannot complete the puzzle. (In the DVD version, Kai’s task is to reassemble the actual mirror). Of course he cannot do it, until Gerda kisses him and melts his heart. He weeps with joy at seeing her, and the splinter comes out of his eye. Like all fairytales, it is a happy ending. Kai completes his impossible task, winning his freedom from the Snow Queen, and the two young people return to their rose garden, where (one imagines) they got married and had a gloriously happy life bringing up their own children with the advantage of the lessons they have both learnt… I like to think so, anyway!

The splinter in Kai’s eye is a powerful image. The devil – or hobgoblin or elf – made this mirror to reflect beautiful things as ugly and make ugly things seem normal. It’s very true that the way you look at something can change completely the way you see life, and I’ve certainly gone through phases myself when a splinter of the devil’s mirror gets lodged in my eye, and I have to make a conscious effort to squeeze it out before I can see the good around me.

Breaking a mirror is also very symbolic, bringing seven years of bad luck according to some. I broke a large mirror seven years ago… of course I’m not superstitious AT ALL, but it is rather spooky how, after almost seven years of being out in the cold as an author following the death of my agent, this year sees the publication of a brand new quest for my readers beginning with “Sword of Light”. And happily, I’ve no need to worry about breaking another mirror, since my lovely editors at Templar sent me this silver unicorn horn as a publication day present, which as everyone knows is a powerful charm against bad luck… 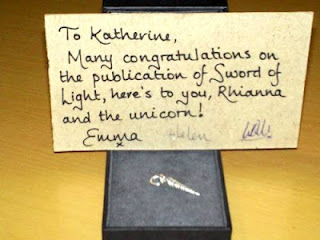 Katherine Roberts grew up in the wild, rocky counties of Devon and Cornwall with their brooding moors and rugged coasts.  She gained a first class degree in mathematics from Bath University, and went on to work as a mathematician, computer programmer, racehorse groom and farm labourer - before her first novel, ‘Spellfall’, won the Branford Boase Award in 1999 and enabled her to fulfil her dream of becoming a full time writer. Her many fantasy books for children and young adults include 'The Echorium Sequence' (beginning with Song Quest), 'The Seven Fabulous Wonders' series of historical fantasies (beginning with 'The Pyramid Robbery'), and 'I Am The Great Horse', the story of Alexander the Great told by his famous horse Bucephalus.

Katherine's latest book, 'Sword of Light', the first of four Arthurian fantasies for children, has just been published by Templar.